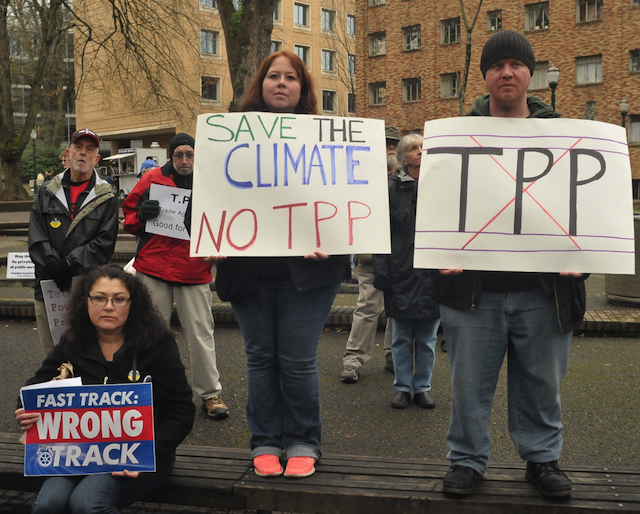 What a difference a month makes. Back on January 9th when Senators Max Baucus and Orrin Hatch, and Representative Dave Camp introduced legislation that would give President Obama “Fast Track” authority over trade negotiations, it seemed a pretty good bet that it would breeze through Congress and be signed into law. In doing so, Congress would abdicate its power and obligation to debate, vet, and amend trade legislation and instead only be able to vote for or against trade legislation produced by Obama’s trade representative.

The primary purpose of giving Fast Track–the colloquial term for trade promotion authority–to Obama was to grease the skids for the Trans Pacific Partnership (TPP). The TPP, which has been described as NAFTA on steroids, would incorporate 12 countries that produce over 40% of world gross domestic product into a so-called free trade zone. But as opponents have pointed out, the TPP has little to do with any reasonable understanding of trade beyond corporations’ rights to destroy economies, ecologies, and working people’s lives.

The TPP is also patently anti-democratic, giving corporations the right to sue governments if those governments pass laws that result in future lost profits. If the US government–which in theory is supposed to be We the People–passes a law that says access to clean, potable water is a human right and that water supplies may not be privatized, a corporation that makes money selling water–think Nestle and its thirst for Oregon’s water–can sue for revenues it feels it could have made. Nestle’s profits would outweigh the decisions of the citizens of the United States.

The TPP began having troubles two summers ago when its negotiations were being held in secret, including from US federal legislators, even as 600 corporate lobbyists were crafting it. Even Oregon Senator Ron Wyden, who has never met a free trade agreement (FTA) he didn’t like, found the process to be problematic. In a recent New York Times op-ed, Wyden was quoted, “Right now, because of the shroud of secrecy, it is impossible for the public to be informed of what’s at stake in potential trade deals like the TPP. This secrecy and lack of informed public input makes it difficult for Congress to oversee and direct trade negotiations. There must be fundamental changes to the USTR’s (United States Trade Representative) approach to transparency and Congressional consultation for the President’s trade agenda to advance.”

Between people worldwide who have seen enough of the devastation wrought by neoliberal economics and Wikileaks’ release of one section of the TPP showing that the agreement would serve to increase pharmaceutical corporations’ profits at the expense generic drug makers, lawmakers found themselves in a tight spot. Last week, Senate leader Harry Reid came out against Fast Track, and since Reid controls what comes to the Senate floor for a vote, it appears that Fast Track is, for now, dead. Without Fast Track, when the TPP came before Congress, it would be subject to debates and hearings which would open the details of it to the public–just what the TPP’s negotiators have been studiously avoiding over the past few years. Additionally, once legislators started tacking on amendments, the legislative bodies on other countries would want to do the same. It is unlikely the TPP could sustain the assaults of even the most farcical democracy. 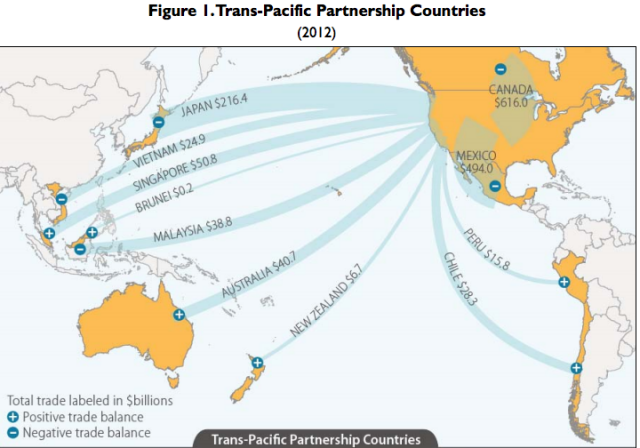 At this point, negotiations on harmful FTAs must be kept secret to gain any traction. In January, the North American Free Trade Agreement (NAFTA) turned 20, and the devastation it has brought to Mexico–and the US to a lesser extent–is well known. Public Citizen’s Lori Wallach has estimated that NAFTA has resulted in a net loss of 1 million US jobs, as well as decreased wages and increased inequality. Even the greatest used car salesman would have trouble pitching an FTA.

January 31st was an international day of action against corporate globalization, and over 50 people attended a lunchtime rally outside of Portland State University’s Smith Hall that served to remind people that while Fast Track, and thereby the TPP, had hit a bump in the road, people must continue organizing, both to defeat Fast Track and the TPP, and to take back democratic institutions that have been usurped by corporate power. Oregonians have organized well enough that all of their Democrats in the House and Senate have spoken out against Fast Track.

Rob Sisk, President of SEIU Local 503, reminded the crowd of the failures of NAFTA, telling them, “Instead of Fast Track, I want to see a track record.” It is that lack of a track record that has led to the secret TPP negotiations and President Obama’s push for Fast Track. The more people learn about the contents of the TPP, the more horrified they are by it. “We need exposure instead of people operating in the dark,” said Sisk. “We gotta turn on the light so it wipes out the people doing these agreements and wipes out the corporations. We need to take back our country from the corporations and not continue to give it away.”

The TPP would be a major boon for resource extraction corporations. Bonnie McKinley of 350.PDX noted that “under the TPP, safeguards for corporate interests rule,” and considering that under the rules of the TPP corporations can sue for future lost profits, she wondered how likely it was “that a government will take on questionable practices of oil companies.” Essentially, the TPP overrides peoples’ rights to clean air, water, and soil in favor of corporate profits. “To use the TPP to clear the way for the corporate devastation of our Earth,” said McKinley, “is nothing less than depraved.”

When Wikileaks released the text of the Intellectual Property Rights Chapter of the TPP in late 2013, it became clear why negotiations were secret. The chapter shows that the corporations writing the TPP literally care more about their bottom lines than human life.

Benjamin Gerritz of Positive Force NW spoke about how impressed he was in 2012 when Obama called on all nations to usher in an AIDS-free generation, but was equally dismayed when Obama expressed his desire to pass the TPP in his latest State of the Union Address. Gerritz, who has AIDS, and has insurance that allows him to take the necessary medications, realizes that the TPP would assure an increase in people with AIDS because it fundamentally asserts that people have no right to generic medications.

One example of the problem is “evergreening”, which allows pharmaceutical companies to extend patents on drugs with only minor adjustments to the medicine, even if those changes have no therapeutic value. Generic drugs, of course, are cheaper than name-brand medications, and they make medicines affordable for more people. Gerritz told the crowd about pharmaceutical manufacturer Eli Lilly recently had received a patent extension in the US for two evergreened medicines, though Canada ruled that the patent had expired. Eli Lilly is now suing the Canadian government–that is, the people of Canada–for $500 million, challenging the foundation of how Canada grants patents, saying it violates NAFTA’s investor-state clause. While many analysts say Lilly is incorrect in its belief, the TPP would rectify that “error” and enshrine that belief into law, essentially saying that a corporation is entitled to sue a government if it feels the government’s policies are taking away from its profits. And as Gerritz noted, those profits “come in the form of millions of people’s lives being placed in peril, unable to access medications.”

That corporations value profit over people should not come as a surprise. But there is still something nauseating when corporate CEOs are so honest about their charge. India’s Natco Pharmaceuticals was recently allowed to make a generic version of Bayer’s cancer-fighting drug Nexavar. According to India’s patent laws, if a medicine is too expensive for most of the population, a generic form may be made. In this case, Nexavar costs about $69,000 a year, but the generic will cost $177. Responding to the India patent court’s decision, Bayer CEO Marijn Dekkers said, “We did not develop this medicine for the Indian market, let’s be honest. We developed this product for Western patients who can afford this product, quite honestly.” 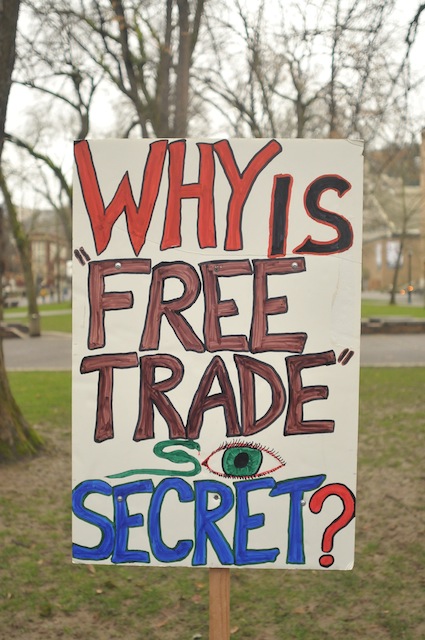 By now it has become obvious that what are called free trade agreements have nothing to do with free trade–but cater to those with totalitarian leanings. A real free trade agreement would be about five sentences long, dealing with rules on tariffs, and then it would be voted upon using democratic institutions, at least in those countries that have them.

While Fast Track and the TPP have gone into hibernation, the US Chamber of Commerce has made clear that it intends to keep pushing for Fast Track. Senator Baucus will soon be heading off to become the ambassador to China and Ron Wyden will fill his Senate Finance Chair. Wyden will be under tremendous pressure to shepherd through the wishes of the business community, and despite his current protests against the TPP due to a lack of transparency, his record shows he doesn’t need much of a push..

“We have won this round of the Fast Track fight,” said Elizabeth Swager of the Oregon Fair Trade Commission, “because of the unrelenting pressure trade justice advocates put on our members of Congress: asking tough questions on trade at town hall meetings, visiting congressional offices, writing letters, putting in hundreds of phone calls and thousands of emails. This is proof that our efforts combined can derail Fast Track and the TPP.”

Want to get involved? Visit the Oregon Fair Trade Campaign’s website at http://www.oregonfairtrade.org.