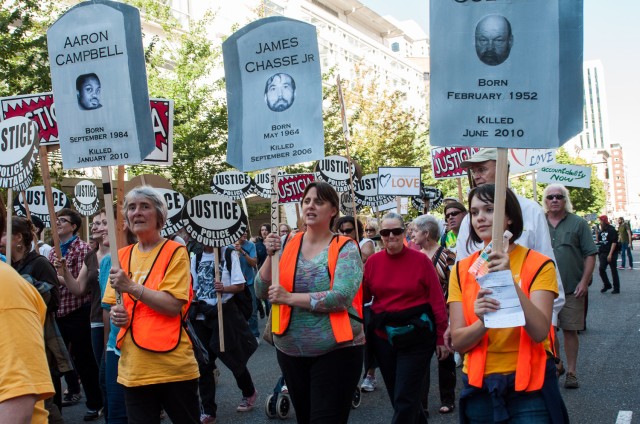 A “Fairness Hearing” about the Settlement Agreement resolving the Department of Justice’s (DOJ) lawsuit against the City of Portland is scheduled for February 18th. The agreement arose out the the DOJ’s yearlong investigation that found the Portland Police Bureau (PPB) had “engaged in an unconstitutional pattern or practice of excessive force against people with mental illness.” At the hearing, Portland citizens will have the opportunity to influence federal oversight of the PPB, as Federal Judge Michael Simon allows testimony before determining if the settlement is “fair, adequate, and reasonable.”

The DOJ released its findings in September 2012, and soon thereafter began negotiating with the City in order to avoid a trial. While the agreement contains some steps that have the potential to decrease police violence and increase accountability, various groups would like to strengthen the agreement. To that end, the Albina Ministerial Alliance Coalition for Justice and Police Reform (AMAC) is holding educational meetings to provide information about the strengths and weaknesses of the settlement, as well as to show people how to make their voices heard at the hearing.

The AMAC has an interesting position in the Settlement Agreement. In January 2013 Judge Simon allowed the AMAC to have “enhanced amicus status”. So instead of being left on the sidelines, the AMAC–which has intimate experience working with people who have been on the receiving end of police violence–has been able to provide a voice for those outside the City council, the Portland Police Association and the DOJ.

Formed in 2002, the AMAC has been at the forefront of efforts to reign in the PPB’s excessive use of violence. Though the PPB’s relations with communities of color was not the focus of the investigation, the 2012 report specifically referenced the bureau’s problematic history, particularly “the often tense relationship between the PPB and the African American Community.” Throughout the process of crafting the agreement, the AMAC’s presence and input has no doubt served as a reminder that police violence is not limited to people with mental health issues.

The proposed agreement does offer some beneficial changes. Of particular note, it states “the use of force shall be de-escalated as resistance decreases.”

Additionally, if a police officer is found by a civil court to have violated a person’s rights, that officer will then be subject to an Internal Affairs (IA) investigation, in which the officer will be presumed guilty of violating PPB policy unless they can produce “specific, credible evidence” showing otherwise. In the past, IA investigations assumed the officer’s innocence, even if a civil court had found them guilty. That said, IA investigations may continue to prove problematic due to their being ensconced within police bureaucracy.

In many areas the agreement does not go far enough. For example, the City was not required to change parts of the existing collective bargaining contract that inhibit effective investigations of the police, such as the rule that allows officers to wait up to 48 hours after using deadly before being interviewed. If ordinary citizens are not afforded this luxury, why should police officers?

While the agreement does place new restrictions on the use of Tasers, it also contains loopholes that nearly negate these restrictions. Although Tasers may not currently be used for “pain compliance against those suffering from mental illness or emotional crisis,” an exception is made for “exigent circumstances.” In other words, if an officer believes he needs to use a Taser to make a person with mental illness, or in an emotional crisis, obey, then he may use it. Where that line between delayed and immediate action exists seems to be up to the officer–a line that too often has been drawn too close to a police officer’s holster.

Officers will now be required to first issue “a verbal warning, or attempt to utilize hand signals where there is a language barrier or the subject is hearing impaired” before using a Taser. However, that requirement may be ignored and a Taser used immediately if the person being confronted presents “a danger to the officer or others.” Again, it is unclear that there is any rule that ultimately governs the use of a Taser. The problems that result from this lack of clarity are what led to the DOJ lawsuit in the first place. 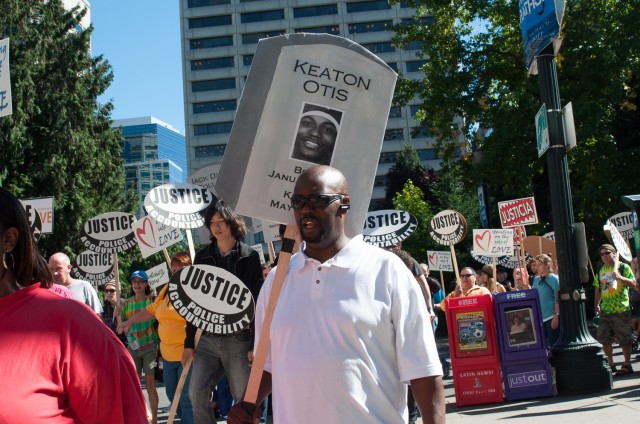 This nebulosity appears to be the norm for the agreement. It calls for the PPB to use “only the force reasonably necessary under the totality of circumstances.”  Although that is the constitutional standard, a more definitive set of rules could benefit Portland. The foundation of the lawsuit and this agreement is the PPB’s excessive use of violence, yet the underlying principle to counteract it has no definitive meaning. As the AMAC points out, there is no “matrix tying maximum force levels to certain levels of resistance.”

On one level, the agreement appears to be great strategy for the City. If the agreement is approved, these vagaries will be codified into law. Police can use lethal force, and then later claim they felt it necessary when considering the totality of circumstances. If later the City is sued for a police action, it can claim the officer was just following the rules as agreed to by the DOJ. This would keep relations with the police nice, and possibly prevent more lawsuits against the City for excessive police violence. Everyone wins. Except for the victims and their communities.

The agreement also does not prohibit using weapons, animals, and vehicles to intimidate. During an unpermitted march on May Day in 2012, police used bicycles as weapons against  participants, and have often shown up on horseback at permitted rallies and marches for seemingly no other reason than to scare those engaging in what should be a constitutionally protected right to protest.

In other cases, the agreement clearly stands in the way of police accountability. Internal Police Review Board (PRB) hearings on use of force cases will remain closed to the public, including the person who alleged the misconduct. Meanwhile, the Citizen Review Committee (CRC) remains a body that can only decide whether the finding handed down by the PRB is “reasonable,” rather than having the power to conduct its own investigation and independently determine if the officer violated policy.

Over the next 5 years, nearly $26 million will be allocated toward the goal of diminishing the PPB’s use of force and creating more police accountability. The money will largely go to the Portland police, putting them–not trained mental health professionals–in charge of assessing the condition of those experiencing mental health difficulties or crises. Given that the police too often follow a “shoot first, ask questions later” policy when it comes to people with mental health issues–as well as people of color–it does not seem a wise, or safe, use of money.

The hearing before Judge Simon provides Portland citizens with the chance to craft a better settlement agreement. If accepted, this settlement will be in place until late 2017 or 2018. At the least, testimony given on February 18th will help create a baseline against which PPB’s performance can later be assessed. At best, it can help craft an agreement that may result in fewer deaths, Taserings, beatings, and other acts of violence at the hands of the police.

Interested in making your voice heard? The Albina Ministerial Alliance Coalition for Justice and Police Reform will be hosting two more public meetings, one on Saturday February 8th at the St. Johns Community Center at 8427 N Central Street from 2 to 4 PM, and another on Thursday February 13th at the Rosewood Community Center at 16126 SE Stark Street.

The hearing about the Settlement Agreement will be held at the Federal Courthouse at 1000 SW 3rd Ave on Tuesday, Feb. 18 at 9 AM Those who do not provide testimony can still provide support.

For more information go to www.albinaministerialcoalition.org.