Troy, a person without housing who sleeps outside near St. Francis Church on SE 12th Avenue, was assaulted on the night of March 2.

“Last night I was sleeping in my sleeping bag. Had been there for a few hours when suddenly I hear someone say, ‘Hey, wake up. Get up’,” wrote Troy, in a statement to a member of Right 2 Survive (R2S), a group of people currently, and formerly, without housing  that educates and advocates on behalf of people without housing. “I was pretty groggy, but I was trying to get up when this person kicked me in the head. I fell down, and while my face was pressed against the concrete, this person kicked me again. Then this person and the person they were with laughed and left.”

Nobody knows who kicked Troy and it may be that there are few people outside of the houseless community and those who work with them to abolish houselessness who care. The City, and the country as a whole, has putatively declared a war on homelessness–one they seem to have no interest in winning.

“We love to declare war on things here in America,” said the late comedian George Carlin. “Anything we don’t like about ourselves, we have to declare war on it. We don’t do anything about it. We just declare war on it. It’s the only metaphor we have in our public discourse for solving a problem. We’ve got a war on poverty, the war on crime, the war on litter, the war on cancer, the war on drugs–but did you ever notice there’s no war on homelessness, is there? No war on housing. No money in that problem. Nobody stands to get rich off of that problem. If you could find a solution to homelessness where the corporate swine and the politicians could steal a couple of million dollars each, you’d see the streets of America begin to clear up pretty goddamn quick, I’ll guarantee you that.” 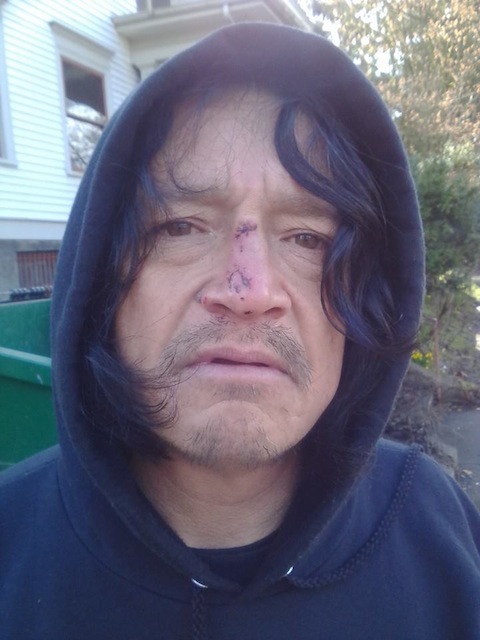 So there is no war on homelessness. But there is a war on people without housing, much as the war on poverty has become a war on poor people. Violent assaults upon the houseless are nothing new. “I’ve been unhoused for well over a decade,” Troy wrote. “I’ve been attacked several times. It happens.”

A couple of years ago some houseless people under the southeast side of the Morrison Bridge were shot at from a vehicle, and while that is a far less common occurrence, it is a result of much of the rhetoric and official action directed against people without housing.

Most glaring is the behavior of Mayor Charlie Hales in allowing the Portland police to continue sweeping encampments of houseless people in and near downtown. During these raids, police steal (the polite words are something like “confiscate until people pick them up from the police station”) these people’s possessions, some of them necessary for survival. Mayor Hales oversees the police department, and even as he and his spokesperson Dana Haynes say Hales has no clue the raids are happening, they continue. It is a charade; unless he is an idiot, Hales knows of the raids, and because of his oversight responsibilities, they are his doing.

But beyond a mayor and a council that aside from Amanda Fritz’s work with Right 2 Dream Too (R2DToo) does not care about the houseless in any meaningful way, and thus contribute to violence against them, the vitriol among those who demean people without housing also causes damage. Last October when the City Council was taking testimony on R2DToo’s proposed move to the parking lot under the Broadway Bridge, many people from the Pearl District freely expressed their disdain for the Dreamers–and all people without housing, by extension–in a manner no different than a person might yell and shake a stick at a mangy dog.

They were described as drug addicts and thieves. They were implied as threatening and referred to as “these people.” They were called “ex-convicts and sex offenders.” Those who had stayed at R2DToo, were called residents of a nuclear waste dump. This language is a direct extension of Hales and his ilk, the people who claim to care about solving housing issues, but really only–harkening back to Carlin–have interest in a business solution.

It should then come as no surprise when a person like Troy is treated as something less than a person. Mayor Hales has set the tone by sanctioning and supporting the police raids. He and other members of the Council work with developers and other business people, but rarely, if ever, with people without housing. Their thirst for a real solution ends at their wallets. 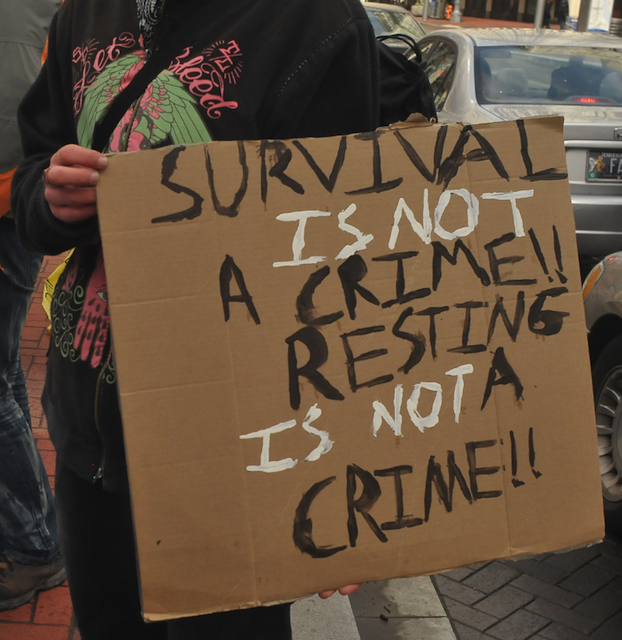 On Monday, March 10, Ibrahim Mubarak, a co-founder of Right 2 Dream Too and a tireless advocate for justice for people without housing, will go on trial for what amounts to treating houseless people with dignity and respect. The official charges are trespassing and interfering with a police officer, stemming from his work with people sleeping under the Burnside Bridge and his refusal to obey a police order that gave him the choice of trespassing in a privately owned parking lot, or stepping over–or on–people trying to sleep on the adjoining sidewalk.

Mubarak made a moral and ethical choice, and his arrest came essentially because he refused to let Hales and the political and economic interests of the business community trump his values and the inherent value of the people sleeping on that sidewalk.

“Look I don’t want to be out here and an eyesore,” Troy summed up. “I am just another person. But that isn’t a reason to beat me up.” Beating people up, calling them horrible names, and stealing their possessions–this type of dehumanization has a long history, echoing back to other groups that have been singled out for persecution, both in rhetoric and action.

Ibrahim Mubarak’s trial will give people the opportunity to show their support for people-centered solutions for the houseless, as well as get involved in the movement to make sure all people have access to housing.  Taking a stand will send a message to Mayor Hales and those members of the council who have put a price on human life in order to appeal to the likes of the Portland Business Alliance, Homer Williams, and Dike Dame–the reminder that that they were elected to serve people, not profits.

2 comments for “Portland Houseless Storms Show No Sign of Abating”