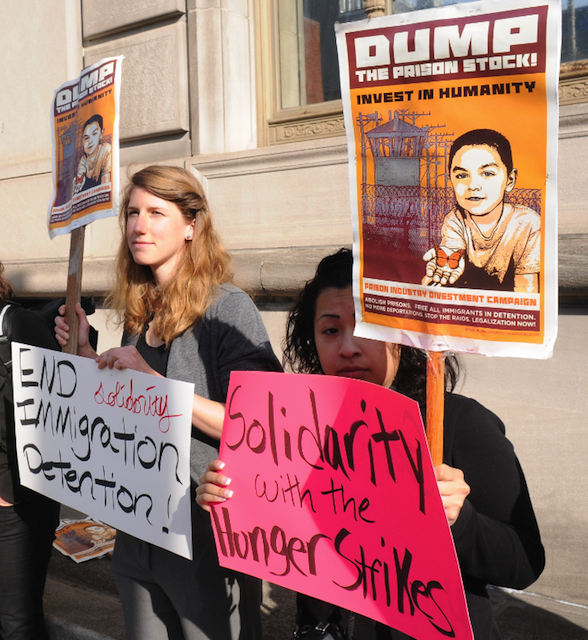 Chanting “No More Deportations!” a crowd of 30 people gathered outside the Immigration and Customs Enforcement (ICE) building in NW Portland to express solidarity with hunger strikers and other detainees in ICE prisons throughout the country. Over 1200 people jailed by ICE at the Northwest Detention Center in Tacoma, Washington, began a hunger strike on March 7 in protest of immigration policies that tear apart families. The rally also protested prisoner mistreatment–including shackling, work wages as low as $1 per day, and poor food and medical care. The facility is run by GEO Group, a private company.

While the number of people on strike in Tacoma has shrunk to three, the strike also spread to the Joe Corley Detention Facility in Conroe, Texas (also owned by GEO Group), and has further galvanized opposition to current unjust immigration laws and garnered support for immigration policy that keeps families together and offers a path to citizenship. Recent attempts at crafting legislation have largely focused on punitive measures such as border patrols and increased deportations–supported largely by Republicans–and Democrat alternatives that would create a pool of labor akin to indentured servants.

The hunger strikes and accompanying rallies in support of immigrant rights come as President Obama, who was recently named Deporter-in-Chief by some immigrant rights groups, continues to deport people at a record pace. To date, the Obama administration has overseen the deportation of nearly 2 million people. With midterm elections looming and the Democrats facing the possibility of losing the Senate, Obama, much as he did with his Deferred Action for Childhood Arrivals (DACA) program in the months preceding the 2012 election, has again tried placation.

Although he did not announce he would stop the deportations, on March 13 Obama called for a review of his administration’s policies, citing a “deep concern about the pain too many families feel from the separation that comes from our broken immigration system.”  It’s likely his willingness to consider other alternatives could be due to the fact that Latinos–a group who greatly helped Democrats in recent elections–may not be so keen on voting for candidates who are working against their interests. 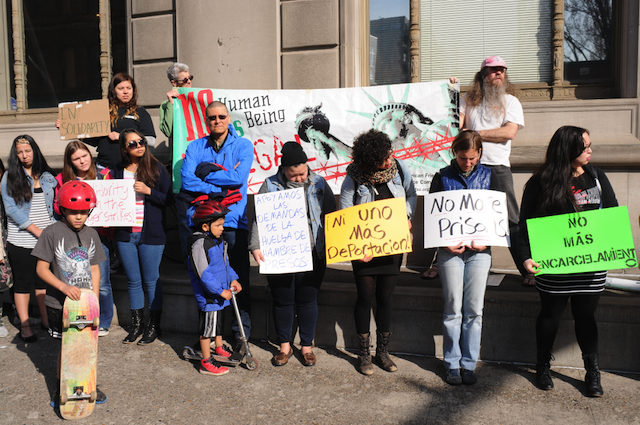 “Immigration and detention,” said Jamie Trinkle of Enlace, “is a result of bad policy. Bad food, beatings, and families being separated–these are so GEO can make a profit.” Trinkle also noted that these policies can be changed; Obama can halt deportations and Congress can pass a bill that will codify into law the abolition of deportations. “The only way we can stop this,” Trinkle said, “is to take out the private prisons. We have to take on GEO. We have to take on Obama.”

Current law, known colloquially as the bed mandate, requires that ICE jails hold an average of 34,000 prisoners each day. According to a study by the National Immigration Forum, as of 2012, GEO Group operated seven of those prisons with a total of 7183 beds, while Corrections Corporation of America had 5800 beds available in 15 ICE-contracted facilities–representing over a third of the mandated beds nationally. Since they are for-profit enterprises, these corporations certainly have a stake in growing the prison population.

Matt Cato of the Archdiocese of Portland told the crowd that “the only culture capable of building a more just world” was one in which people would “feed the hungry, give drink to the thirsty, and welcome the stranger.” Referring to those immigrants detained in ICE prisons, Cato said, “They are our brothers and sisters. We listen to their cries.”

Hillsboro High School senior Eddie Bolaños expressed solidarity with the hunger strikers and all immigrants held prisoner in the United States. Bolaños recently returned from the Mexico-California border where he took part in the Bring Them Home action organized by the National Immigrant Youth Alliance (NIYA) to help reunite families separated through deportation. When he and the group of Oregon Dream Activists and immigrant rights activists returned to Oregon on Sunday, Bolaños said they recognized what they had in common with the hunger strikers. They fasted for the day “in solidarity with strikers to let them know they are not alone. We are here for the same struggle.”

That struggle has a simple and imperative message: don’t tear apart families. In recent months, through various acts of civil disobedience, immigrant rights advocates have taken that message to the halls of political power, attempting to force the government to bend to its will and treat immigrants as people, not animals to be herded into for-profit prisons. “We don’t understand why this government, this system, intends on separating families,” said Bolaños. “We have to stop GEO Group. We have to stop our government. We have to reunite these families.” 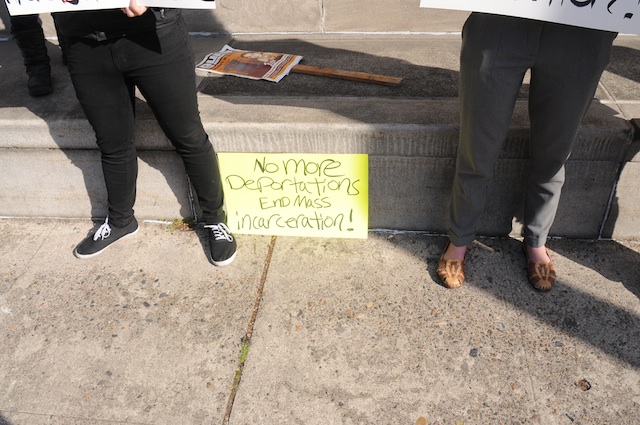