Housing Justice advocate and Right 2 Dream Too (R2DToo) co-founder Ibrahim Mubarak was arrested for trespassing and interfering with police  in late February while reaching out to help people without housing. He will be tried for these charges on June 9. The trial is expected to last two days, with both Mubarak’s lawyer and the District Attorney calling numerous witnesses.

At the the time of his arrest  Mubarak, a tireless voice for the rights of all houseless people,and members of Right 2 Survive–an advocacy group whose members teach about and defend the civil, constitutional, and human rights of people experiencing houselessness–were filming the Portland police harassing people without housing sleeping under the Burnside Bridge. He was in the adjacent parking lot and when Portland police officers demanded he get on the sidewalk, Mubarak refused, saying he would not walk on people.

About 15 people attended Mubarak’s first courthouse appearance. “I live in the city and have for awhile. So many people seem to get ignored by most of us,” said Jim, who has attended Right 2 Survive meetings. “They are not well-served by the safety net, and they get a worse deal from the police. Ibrahim has been great as an organizer of others. It seems important to support him.”

Following the scheduling of his June trial date, Mubarak talked in the hallway outside Judge Adrienne Nelson’s courtroom with his lawyer, Benjamin W. Haile of the Portland Law Collective. Mubarak wondered what a jury of his peers would look like. When Haile told him that his peers would be taken from a pool culled from Division of Motor Vehicle and voter registration records, Mubarak wondered how many of those peers would be “Black, Moslem, and homeless advocates.”

Mayor Charlie Hales has been waging war on people without housing for much of his tenure. While he often speaks about needing to alleviate the problem of houselessness, the sweeps of houseless encampments and the confiscation of possessions necessary for survival betray both himself and a largely supportive city council. With an antipathy reflecting the desires of the Portland Business Alliance (PBA), Hales seems to be going full throttle in attempting to rid downtown of people without housing. 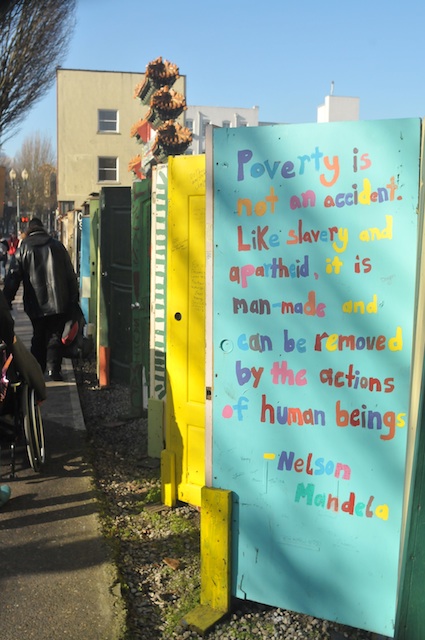 Mubarak refuses to bend to the whims of Hales and his PBA cronies. He also understands that this trial is not about him. “I’m going through with the trial because I believe the houseless community in general does not know their rights or if they do, they are afraid to speak up for themselves because they know from that past that nothing will happen. This is about the people in the trenches, the people being abused through unjust laws and being criminalized through unjust laws. When people stand up–when they let the police and the government know they will stand up–they show them they will fight back for their rights.”

The trial, much like Alicia Jackson’s on Wednesday April 30th, will be one of values as much as people. From the perspective of the City and the Portland police, Mubarak was not obeying the law when he refused the police order to get on the sidewalk. For Mubarak, obeying that law meant treating some of the most vulnerable people in society as literally beneath him. While apparently acceptable to Hales and the Portland police, it is not to Mubarak.

By going through with the trial–by challenging rules he finds immoral–Mubarak is challenging a system that encourages treating people without housing as subhuman. That fight is no different from others, such as the young people without documentation who are challenging unjust immigration laws by standing up and demanding they be treated with the dignity and respect that should be the right of all people. Mubarak and the many others who advocate for the rights of people without housing are working toward that same end by standing up together to demand dignity and respect. Not ask. Demand.

Just after Mubarak and his supporters left the courthouse, another example of the type of harassment, bullying, and degrading treatment they have been fighting against was on display. According to Mubarak, a person without housing was being harassed by the Portland police, who were asking him where he got the two bicycles in his possession. He replied that he had bought one and the other belonged to his friend, and he was getting it fixed for him. The police then checked to see if the bikes had been reported stolen, which they had not. The police then questioned the man for another ten minutes. Not getting the answer for which they apparently were looking, one of the officers asked the man if he had a receipt for the bike. He could not produce one, and so the police, as Mubarak put it, legally stole both bicycles.

The police know they will not be held accountable for their actions. If they can shoot and kill people of color without being held accountable, why should they worry about being disciplined for stealing the property of people who lack the resources to challenge them, especially when their boss, Mayor Hales, apparently approves of such actions.

After the police took the bicycles, a man in a suit rode by. Mubarak asked the officers if they would ask him for his receipt.

Ibrahim Mubarak’s trial will be held at 9 AM on June 9th at the Multnomah County Courthouse located at 1021 SW 4th Avenue in Portland.