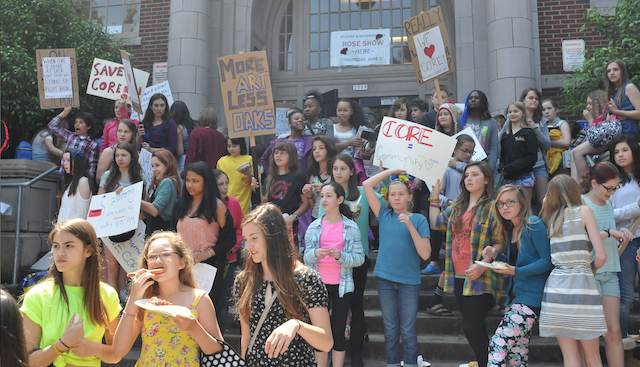 Chanting “1-2-3-4, we are not a test score! 5-6-7-8, let our teachers educate!” about 75 da Vinci Arts Middle School students gathered on June 2 to demand their principal respect them and their school.

The lunchtime rally on da Vinci steps was in protest of a proposed change to the schedule that would see a boost in instruction hours for math and science–areas where it has been deemed that test scores are too low.  The result would be a loss for the arts and social studies–subjects that form the “Core” of the students’ schedules

Da Vinci is different from most other schools in that the students in these Core classes stay together for three periods each day and have the same teacher throughout their three years in the school. While the students also take math and science classes, the emphasis at the school is clearly toward the Core classes and instruction in the arts. Parents of da Vinci students have described Core as creating a family for the students while they are at the school.

Da Vinci’s students have performed well on standardized reading tests, but Principal Fred Locke says scores in math and science are lacking. Test scores are not as poor, however, as Locke would have the da Vinci community believe. Math results are above the state average, and science scores are 13.3% above state average–only 4% behind Portland’s Sunnyside Environmental School, a magnet school focused on science.

The protest comes on the heels of a student walk out on May 20, and echoes districtwide pupil and parent objection to Portland Public Schools’ (PPS) move toward using standardized tests as the measuring stick of student achievement. The criticism is that standardized tests are a poor way of assessing what students have learned over the course of a school year or career and provide more of a snapshot of what they can regurgitate in one sitting rather than how they might use the knowledge they have acquired.

“These tests prove how well you take tests, not what you learn,” said 8th grader Gavin MacCartney. “Teachers will teach toward tests, so there will be less learning.Not everyone can be good at science or math. I’m not saying that science and math are not important, but to change the school because of test scores is to strip it of what makes it so great. The focus on science and math would take away from what this school is about.”

MacCartney has helped set up da Vinci’s student union to fight the changes. Prior to its establishment, only Portland’s high schools have had student unions, and the students involved in them have led the fight against the PPS push to make standardized tests the determinant of students’ knowledge.

No student or parent is declaring that math and science should not be taught at da Vinci. But the question is one of how one goes about improving students’ skills at these subjects–an issue almost entirely different from improving standardized test scores.

Under Locke’s proposal, Core will be reduced by about 26 minutes each day and Core teachers say they won’t have time for the community building activities they use or time for silent reading. Silent reading is a time when teachers rotate around the room having meaningful individual conferences with students. Teachers say that this is often the only time they have to do this. 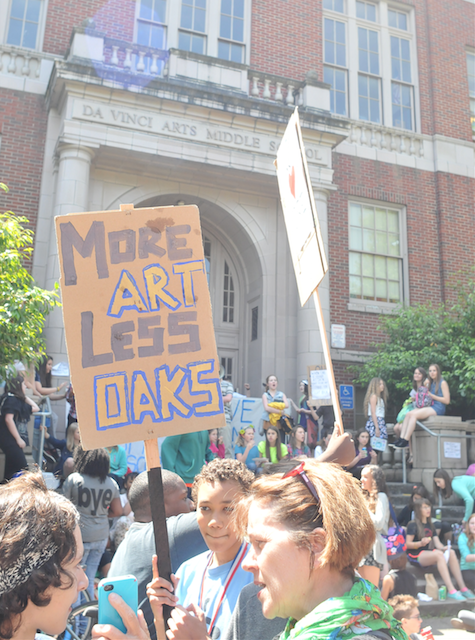 A survey asking members of the da Vinci community “Which of the following statements best describes your feelings that the current Core structure fosters community at da Vinci” found that of the possible responses “agree,” “disagree,” and “unknown,” over 90% chose “agree.” Despite this, Locke has chosen to make these changes based solely on standardized test data. He has not sought input from teachers, parents, or students, providing an interesting study in the democratic values that schools are supposed to pass on to students and the top-down values that go hand-in-glove with a standardized testing regimen imposed by administrators. In response, at least 45 da Vinci parents have pledged to have their children opt-out of standardized testing next year. If a school has less than a 95% participation rate, then they drop down one level on the state report card.

The mandate from Locke is perplexing for many reasons. For one, there is no evidence that these changes will change test scores. Furthermore, the Oregon Assessment of Knowledge and Skills (OAKS)–the standardized tests upon which Locke is making a decision—will no longer be used after this school year. OAKS will be replaced by Common Core standards which unlike OAKS, will not allow students to substitute a work sample for the standardized test. During numerous rallies over the past two years, students in Portland’s schools have spoken out about how Common Core will, because of its more stringent reliance on standardized tests, prove more devastating to their education than OAKS.

There are alternatives to improving student math and science skills that do not require a change in scheduling. For example, PPS has provided math support staff to schools, including da Vinci, for students who need extra help.

There is the larger question about the purpose of an education. If schools are supposed to produce workers for a corporate dominated society, where people are just widgets valued for their ability to do what they are told, standardized testing makes complete sense. But that is not what many da Vinci parents value. At a May 27 Parent Teacher Student Association (PTSA) meeting, Yeigh said school administrators told parents their children were failing, an assessment based on the OAKS scores.

The difference between a holistic education and a form of learning that is judged by performance on standardized tests is crucial. The latter promotes corporate culture where conformity and the ability to do what you are told are held in high esteem. The former teaches the values that are at the heart of a society that rests on democratic institutions, and requires much more than filling in a bubble with a pencil to determine success.

As an example, Yeigh talked about how her son’s frustration when he first started at da Vinci because during play the teacher, who valued fairness over winning would change up teams when it became clear one was dominating the other.

Soon a young woman with scoliosis entered his class. She had been ridiculed at her former school because she spent much time in her wheelchair and her mother described her as hating herself. One lunchtime at da Vinci the students were playing ultimate frisbee and the young woman wanted to join in. Ultimate frisbee generally entails running, but since she could not, the game was amended to put her in the center of the field. She was able to take part in much of the action and, according to Yeigh’s son, played well enough that she was a primary reason the teams needed to be shuffled due to her side winning so handily.

The kicker to the story is that no teacher was present on the field–the students themselves made the alteration to include the young woman. Yeigh worries that the time Locke wants to take from Core–time that could be devoted to such lessons that can never be measured through a standardized test–will be a heavy loss indeed

“They did this on their own because of the lessons they learned from their Core teacher,” Yeigh said. Core is like your family. The leader of your family is showing you how to act, and they carried this out when that leader was not around. No one made them do that. As a parent, that’s what I want my children to do when I’m not around. That’s what is important to me. That girl is now accepted at school because of a community of adults and children who helped figure that out.”