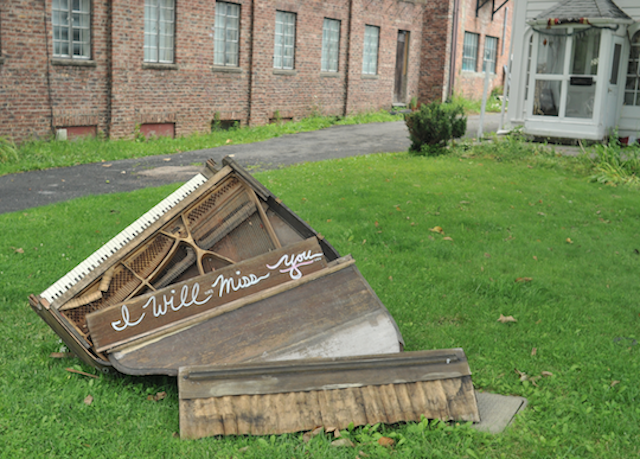 Every so often, when mentioning that I write for this publication, I get asked whatever happened to the Occupy Movement. The question often confuses me because it implies a singularity where I see linearity or even a sort of feedback loop that links past with present and constantly informs future, however unpredictable. To my mind Occupy was about a lot of people suddenly seeing a problem and wanting to do something about it getting it on with a lot of people who already saw problems and had been working on crafting solutions before people began taking over parks and other public spaces. Surely many of the people in poverty and without housing who made up some of the occupants of Portland’s Lownsdale and Chapman Squares had long known the injustice of a system valuing markets over people. And certainly people of color–who in many Occupy sites, including Portland, were told their concerns regarding race were secondary to issues of class–all too well understood the inequities that had begun to engulf the largely white middle class.

When it was over, so to speak–when police forces destroyed encampments and beat and arrested people–some folks called it a day. That should have come as no surprise. In a history that is often written as a narrative extolling individualism and singular moments that result in gains made as if through–pardon the expression–an invisible hand, the singular moment had fizzled and for those who bought into the dominant narrative, there was nothing more to be done but go back to what they were doing in August, 2011. The corporate media told them they had failed, even if those newspapers and television shows never got a handle on what the people of Occupy were doing.

But many also discovered that this narrative was a lie, particularly in light of Occupy providing services–food, shelter, and medical care–that the state was failing to provide for those who most desperately needed them. At least judging from the increase in people working with activist groups in this city, as well as the emergence of new ones, the number of folks who understood this was substantial. They had found other people who felt the same things they felt, and in Occupy those people were working with other like-minded people to do something about it. After Occupy, they plugged into groups and got involved in the work that sets the substrate from which those singular moments, including Occupy, spring.

Recently I traveled to the East Coast to visit family and attend a wedding. My dad, 89, was looking and sounding great. An FDR Democrat, he has long wondered what went wrong, and while the New Deal did not go far enough–some might convincingly argue that it kept capitalism on life support, and we are now, once again, paying for keeping it alive–it did help him and his family make it through the Great Depression. He realizes it did not help all people, such as people of color who were left out of many programs, and has never expressed anything but support for people working to correct those injustices. Occupy pleased him because people were so obviously doing something, just as they were when he was growing up, and whenever we talked on the phone during those heady days, he wanted to know what was going on. He still does because he has lived enough history to know these things don’t die, save in their coverage in the corporate media.

This perhaps doesn’t seem like much. Give the man a break. Two months ago he nearly died from a diverticular bleed, and two months before that he fractured a vertebrae.

The wedding was in Vermont. Along the way I picked up my better 99%, and traveling through New Hampshire we saw a crowd of 15 people picketing outside a McDonald’s demanding a living wage. It was about 10 AM, and while the gas station next to the restaurant was crowded, as gas stations at interstate will often be, the McDonald’s was empty, as McDonald’s restaurants at interstate exits will rarely be. The fight for a living wage for fast food workers has gone nationwide. Not just in cities, but in more rural areas such as that one at the intersection of I-93 and I-89, people who had never exercised their power in a sector of the economy that was putatively unorganizable, are organizing.

As we arrived in Underhill, a very small town where vegetable stands rely on the honor system, we saw some of the tallest mountains in the Eastern States. Not much compared with Mt. Hood, but nonetheless, formidable enough to leave the climbing to others. In the shadow of one of them, two of our Friends were married. The ceremony was quaint, even pastoral. It could have passed as an enactment of The Band’s lovely song “The River Hymn.” The gathered sang forth the soon-to-be-wed couple. Friends Deborah and Aeryca stood under a tent, one that if I heard correctly was traditionally left open on two sides, symbolizing that with this union, both families of the married are welcome. The tent was, however, fully open, welcoming all.

Ten years ago, this could not have been. Then, except for in Massachusetts, marriage was legally considered to be only between a man and a woman. It was a wedge issue in the 2004 election and perhaps played a roll in George W. Bush’s reelection. I normally don’t take pleasure in other people’s suffering, but I would be lying if I said it did not bring a smile to my face when recently Tony Perkins of Focus on the Family stated that because of the legalizing of marriage for all couples that has spread across the country–due to the hard work so many people, including Deborah and Aeryca, put into this fight–he felt his life had been a failure. (Not to fear: Perkins does not take failure lying down, and his hatred of everything outside his very small closet of what is good, proper, and American remains well-stoked.)

It was a beautiful time and place with two beautiful people vowing to do what I have always known them to do: love, respect, cherish, and do all those other things that shine a light so bright that it can pierce the thickest darkness. I think we all deserve the best. Every so often, such as on that Saturday afternoon, I think Deborah and Aeryca deserve a little more. Particularly because they would argue that everyone else does too.

Woodstock, the upstate New York art colony which gave name to the three day festival that was held up the road on Max Yasgur’s farm due to townspeople’s worries that their tiny community would be overrun by hordes of fun seekers and the like–good call, by the way–is on the road back to New Jersey. It, like just about anywhere in the Catskill Mountains, is a nice place to get a sandwich, and I figured since I had once met Levon Helm and another time had gotten kicked off of his property–in a very kind fashion, I should note–I felt I should pay my respects to a man whose music has meant and continues to mean so much to me. His gravesite is simple and has many drumsticks left by fans and Friends. His complement, bassist Rick Danko, rests nearby. They, like many, are too soon gone, but in the sadness of passing, I am thankful for the wonders of recording. 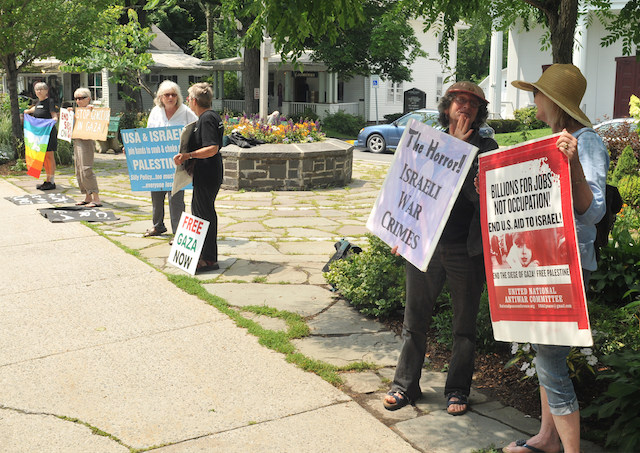 We ate in a place across from the town square–or triangle as it is. On the sidewalk abutting Route 212, a crowd of about 10 people had gathered to protest Israel’s murderous attack on the people of Gaza. A woman there informed me that the weekend prior had seen 42 people, a substantial number in a town so small, but that most of them had gone to New York City this weekend for the big rally there.  I told her of the large rallies that were going on in Portland, and she was pleased that she stood in solidarity with people on the other side of the country, separated by 3,500 miles, bound by cause.

Kenneth Churchill, a man long involved in rights for houseless people, was also there. He told me he had been in that fight for over 20 years. His piercing baby blue eyes gave an aura of intensity that no doubt exists, but was not apparent while we talked. He has been campaigning for every county to have an area–5-8 acres on the fringes of Woodstock in this case–“on which homeless people could set up tents without being considered trespassers” because “being forced to live without shelter causes the natural consequence of unnatural death.” He was impressed when I told about Right 2 Dream Too and the housing defense community’s work, particularly in the case of Alicia Jackson El.

Then it was back to New Jersey for one more day with my dad and my brother and his family. We left for the airport at 4 AM, making sure to pet the three dogs and two cats on the way out. Soon we were back in Portland. Home. Where just like on my travels, one can see many people fighting for that amorphous term, a better world.

One great thing about the Occupy Movement was that it broke through the isolation that seems to cripple so many people from getting involved. The myth of individualism teaches that groups of people getting together–outside of corporate structures–stands in opposition to the story of the country. This is ridiculous, of course. No greater justice has ever been achieved solely by an individual. Occupy showed many people who had never considered this before that they could find people who thought as they thought and could work with them to achieve things that seemed impossible.

This is not to say that what I saw while traveling these recent days–and what I see every day in some respect in Portland–was due to the Occupy Movement. These fights for dignity, respect, and justice existed before 2011, and they have taken on different wrinkles since then. They are where many people who were involved in Occupy moved after the encampments were razed. If anything, the problem was choosing among the myriad of causes for which one wanted to advocate and fight.

So what happened to Occupy?