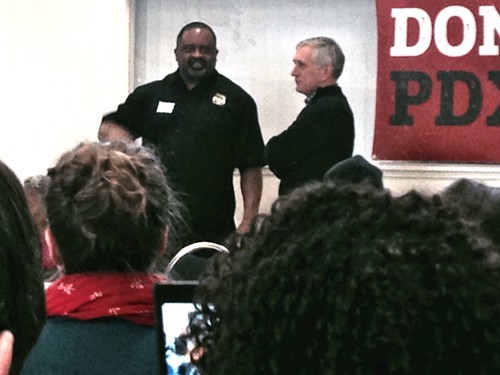 Shocking the Portland political establishment, Mayor Charlie Hales announced today his resignation, effective immediately. Hales was expected to run for reelection in 2016, but citing his “frustration with certain elements of city governance, particularly the lack of effectiveness in dealing with the police and people without housing,” he has decided to drop out of electoral politics. He now intends to lend his support to various groups fighting to reform or abolish current systems of policing, such as Black Lives Matter Portland and Don’t Shoot Portland, as well as those “legitimately” working to solve houselessness.

“We have serious problems in this city–in the whole country actually–and our politicians are not doing anything to solve them,” said Hales at this morning’s press conference, held at the corner of NE 6th and Halsey, just a few feet from where Keaton Otis was executed by the Portland Police on May 12, 2010. “How many times will the police get to murder and terrorize people of color and people suffering from mental crises before they are held accountable?”

Hales pointed to the 9 bullet holes in the wall of the building. “C’mon, these cops opened fire 32 times, and the young man was also tased. Had he done anything? No. Was he a threat? No. Was he a young Black person? Yes. For the too manyeth time, yes. How is it that none of the officers have been held accountable? You’d have to be the mayor of Crazytown not to find something wrong with that. As of this morning, that mayor has resigned.”

Hales was asked what led to his sudden decision.

“There are many reasons. For one, an honest reckoning of this state’s history–a great summary of which is given in Walidah Imarisha’s Why Aren’t There More Black People in Oregon? presentation, which I recently attended–shows a direct institutionally racist line from Oregon’s creation as a white-only utopia to today’s racist institutions, such as the Portland police, and frankly, the City government that I am now leaving behind.” 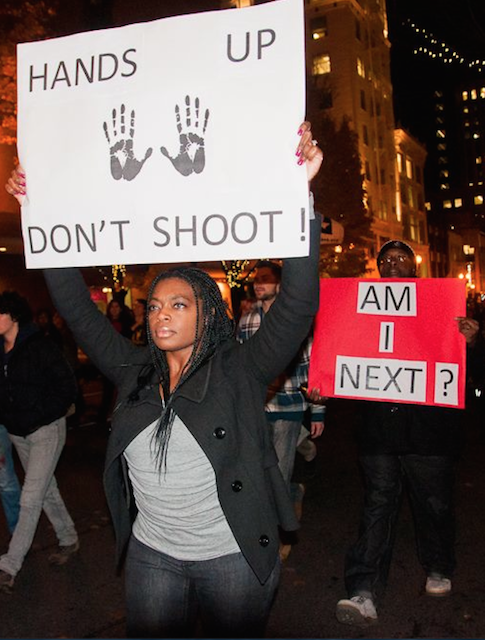 “When when you see all the people gathering in the streets decrying police violence, it’s hard to keep ignoring reality. Well, it’s easy to do–we do it all the time, and so do you most of you in the corporate media, accepting the idea that it is the work of a few bad apples, or even buying whatever excuses police officials like Daryl Turner make.  Seriously, what’s up with that man?  I know it’s his job, but some satirist in this city had it right when he wrote about how the guy acts like he and the police are some sort of divinely created group, just doing the good lord’s work.  These police, just like their progenitors–the slave patrols prior to the Civil War–exist for one purpose, and it is not to serve and protect us.  It is to serve and protect the status quo and those who benefit from it.  They do this by brutalizing, and yes, even murdering those people–traditionally people of color and poor people–who might rise up against this capitalist system that grinds them into the ground. It is a systemic problem, not an individual one. God’s work? Why not just make the police dress like Roman centurions?”

“I just got tired of it,” Hales continued. “How many years do people like Jo Ann Hardesty and Doctor Reverend Leroy Haynes have to keep fighting this ridiculous battle just to have people of color treated with decency and respect? More than they should, a lot due to people like me who sat on the council and pretended everything was fine, that police just have difficult jobs. It’s really like a parent making excuses for a wayward 5 year old, and then making the same excuses when that child becomes a sociopathic adult. For fuck’s sake, I reinstated a Nazi lover to the police force.”

The Black Lives Matter Movement and Don’t Shoot PDX have been leading the charge against police violence in Portland since Michael Brown was murdered by Officer Darren Wilson in Ferguson, Missouri. Hales said he was impressed with the leadership of the groups. “How many groups that should be led by people of color are actually led by people of color? Not many. Too often, white people–particularly white men–try to take over the groups, saying they know better. It’s soft-pedal racism; another way of saying Black lives don’t matter. But these groups are being led by Black people–often young Black people–who have shown more courage than most of us will ever know. How many of you reporters, if you knew police and security forces, and vigilantes, were gunning down one journalist every 28 hours–as they are Black people–would so boldly resist and rebel?”

Asked how he would lend his services to these groups, Hales replied, “In whatever way they ask me to. They are the ones who should be deciding the direction these groups take. My job is to help in whatever ways they ask me to to help dismantle and destroy the white supremacy that is at the heart of the police institution, as well as the country itself.”

Hales also plans to devote his time toward houselessness. He noted that, despite many promises, little progress has been made in dealing with this critical issue. “We talk about this all the time, but we do nothing. That’s not quite true. Commissioner Saltzman fined Right 2 Dream Too, the rest area for people without housing, to the tune of $20,000 because it was in violation of a camping ordinance. Camping. Think about that. He was saying that people without housing are camping when they finally have a safe place to stay for the night. What kind of cruel fool would come up with that idea?”

“Remember that hearing when R2DToo was going to move under the Broadway Bridge?” Hales asked in reference to the council session in which it was expected the council would sign off on the move, but later balked due to pressure from Pearl District residents and developers. “You had all those evil freaks from the Pearl District come out and lie about and vilify these people who are so vulnerable. Did you hear some of the things those assholes said? That guy Tequila was right when he testified that they should have been ashamed of themselves. My God, they’d be first in line to drive in the nails if Jesus came back today. And the Buddha for good measure. Of course, Homer Williams would find a way to make a buck off it. Prick.”

“I’m not one to speak, though. I felt the pressure of the Portland Business Alliance (PBA) and kowtowed before them. I kept telling you in the media I had no idea that the police were sweeping houseless camps around the city, stealing people’s possessions, including blankets and medications. I had them do that in the middle of winter when the night temperatures were getting into single digits.  People died because of that. Seriously: my actions killed people. I think only the traitorous Denis Theriault called me out on my bullshit. Any reasonable society would have at least forced me out of office then and there. I guess the liberals in the city were trying to keep it weird. They probably would have reelected me too.  They watch too much Portlandia.”

“They really need to put a bird on it,” he said, flipping his middle finger in the direction of downtown.

While in office, Hales– like nearly all city politicians–backed houselessness solutions which actually were business solutions that might coincidentally have helped some people without housing. “If I had a dollar for every time I said that crap about how we want to solve houselessness, I could have bought the US Bank Tower and turned it into apartments for people without housing. Most of us aside from Fritzy didn’t give a rat’s ass about helping houseless people. What we wanted was to give some money to developers like Williams to build a place that would allow them to make a ton of money and would also provide shelter for a few people who lack housing. The real solution is easy. We have so many empty spaces, whether in office buildings, condominium complexes, empty buildings, and so on. We need to take them and turn them over to people without housing. You cannot put a price on life, despite what the PBA says.”

Hales then turned and placed his fingers in the marks of the bullet holes in the side of the building behind him.  “We must stop being Doubting Thomases,” he said.

After the press conference Hales quickly walked off. A few blocks later, perhaps when Hales thought he had finally achieved enough distance between him and the cameras, he gave some money to panhandlers. “I’m sorry,” he told them, “for that awful thing I said about you in my recent interview with the Oregonian. It was cruel and I should never have said it.”