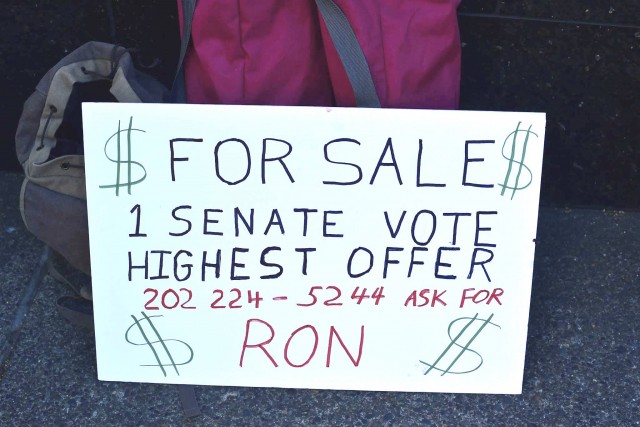 The good news is that Senator Ron Wyden keeps backtracking on his support for Fast Track legislation that would let the Congress abdicate its constitutionally mandated authority over trade and give that power to President Obama. The bad news is that he is backtracking further toward the multinational corporations that support erroneously named free trade agreements (FTA) such as the Trans Pacific Partnership (TPP).

Yesterday, along with 59 other senators, voted to invoke cloture on Fast Track, which will likely pave the way for its passage today. Wyden’s vote is not surprising. Despite all the evidence showing that FTAs are harmful to workers, the environment, and democracy, Wyden has always advocated for them. The TPP, which if passed will be composed of 12 countries in the Pacific Rim that produce 40% of the world’s gross domestic product, will dwarf all trade agreements that have preceded it.

Fast Track would make passage of the TPP and other FTAs easier by limiting time for debating trade legislation and not allowing for amendments.

On June 22 over 50 people gathered outside Wyden’s Lloyd Center office demanding he vote against Fast Track, and if not that, then against the TPP. Many carried signs that in one way or another noted that Wyden was selling out the people of Oregon for corporate interests.

Like FTAs before it, the TPP enshrines corporate profits as more important than the welfare of people. For example, prior to the rally, a couple of people were talking about the provision found in FTAs such as the North American and Central American Free Trade Agreements (NAFTA and CAFTA, respectively)–that allows corporations to sue governments that pass laws that impinge upon their future profits. One of them mentioned the law passed in Jackson County that banned growing genetically modified organisms and how a company like Monsanto, using the TPP, could bypass the democratic will of the citizens of Jackson County and sue the county in a private court with no connection to US laws, much less those of Jackson County. 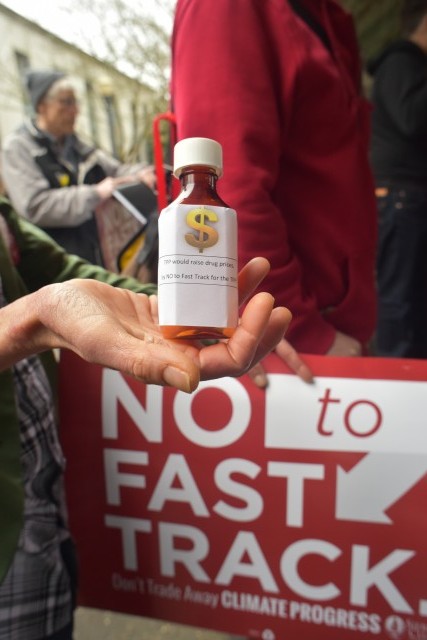 That anti-democratic provision stands in sharp contrast to the more genuine form of it seen at the various actions over the past few years that have educated people about the TPP and sought to thwart its passage.  “We’re exercising democracy by standing in front of our senator’s office and telling him to stand up for the welfare of the people of Oregon,” Rob Sisk, President of Service Employees International Union Local 503, told the crowd.

A few years ago, when Wyden was chair of the Senate Finance Committee, he hoped to push through Fast Track legislation, but there was too much public pushback. Wyden then made overtures about something called Smart Track, which was just Fast Track with a different name, but too much public pressure made sure it didn’t get beyond the drawing board.

Smart Track, as well as Wyden’s support for the TPP, was supposedly going to be based on his desire for transparency in the negotiation of FTAs. The TPP has for quite a few years now been negotiated in secret by trade and corporate representatives. There has been nearly zero input from environmental and labor groups and others whose lives will be hurt by the TPP, such as those who need certain medicines to survive that the TPP will make more difficult for them to obtain. But it will mean massive profits for the corporations that are literally writing the legislation.

So whose interests is Wyden representing?

“Senator Wyden has an interest: corporate interest,” said Sisk. “They own the power and wealth in this country, so that is where his ear is turned. But his back is to the people of Oregon.”

Among the more egregious of those interests are those of coal, gas, and oil companies. According to Elizabeth Swager of the Oregon Fair Trade Campaign, instead of keeping his promise “to fight for the strongest environmental protections ever,” Wyden has decided to fast track a trade agreement that would give these companies “new tools to challenge future environmental laws.” Swager also noted that US negotiators insisted the term “climate change” be stripped from TPP, and that the House of Representatives “just added language preventing even future trade agreements under future administrations from considering climate solutions in trade agreements.”

Those rules clearly do not represent the interests of people. Rather, they are a betrayal of them.

After the 2014 elections, in which the Republicans took control of the Senate, Wyden was out as Finance Committee chair. But he still clamored for transparency in negotiating FTAs. However, the only transparency has come from Wikileaks, and with good reason. If people knew what was in the TPP, they would realize it is not about trade, but expanding and consolidating corporate power and profit.

Swager said, “Senator Wyden promised to fight for transparency. He said Oregonians deserved the right to know what’s being proposed in our names in real time, that we deserved the right to participate in the formative stages of negotiations. Instead, he’s signed off on a plan that grants hundreds of corporate lobbyists from companies like Walmart and Chevron and Cargill access to the negotiating proposals, but we don’t get to see them until after the negotiations are over and changes are all but impossible.”

There are still a few strings to be played out. First is the Fast Track vote. Considering the vote for cloture–60 votes are required–it is fair to assume Fast Track will pass the Senate. However, there is also Trade Adjustment Assistance (TAA) that needs to be authorized. TAA sets aside money to help reeducate and retrain those workers who qualify for it after losing their jobs due to the results of FTAs. TAA is an important piece of legislation, and it is opposed by Republicans.  In a strange but strategically sound twist, two weeks ago, Democrats in the House of Representatives used this to put the brakes on Fast Track for a few moments by voting with Republicans, resulting in TAA not passing. 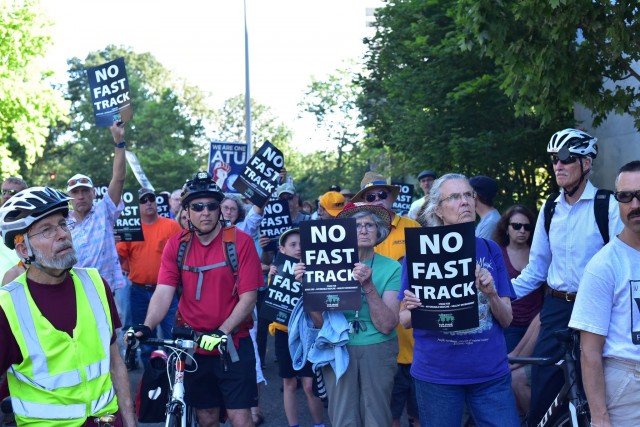 But the House quickly took another vote, passing Fast Track without TAA (supported by Oregon Democrats Earl Blumenauer, Suzanne Bonamici, and Kurt Schrader). This was the same Fast Track bill that will likely pass the Senate and then head to Obama’s desk for his signature.

Will the TAA pass in the Senate and House? It seems Republicans in the Senate are willing to let it pass as part of the price of passing Fast Track, but that may not be true in the House. Then again, it may not matter. Obama will have his Fast Track, and that is all that seems to matter to him, Wyden, and the other Democrats who have walked lockstep with Republicans on this issue.

At the rally, Ted Gleichman of the Oregon Sierra Club noted that Oregonians no longer have the right members of Congress. In particular, he called out Blumenauer, Bonamici, Schrader, and Wyden for supporting Fast Track and the TPP, which would only exacerbate what he outlined as the environmental, economic, and social crises facing people today “in a way that only helps the 1%.” He urged people that they needed to “re-member” all of their seats when they come up for election next year.

The next step, it seems, is stopping the TPP itself. Supporters of the TPP understand there is not that much time to pass it because of the looming 2016 elections. Wyden, as well as Blumenauer, Bonamici, and Schrader are up for reelection, and of course, there is a presidential contest.

The fight against the TPP has been going on for a long time because of the work of many people fostering solidarity between various groups of people supporting labor rights, environmental standards, immigrant rights, democracy, access to cheap medications, and numerous other important~ issues. It would be wrong to say that the task of stopping the TPP is going to be easy. The fight over Fast Track is showing that. But at the least that fight is quite a bit easier because of this hard work. The architects of the TPP thought it would sail through when negotiations began in 2010, but there has been so much resistance that 5 years later there is still no TPP.

Want to get involved in stopping the Trans Pacific Partnership and holding Oregon’s members of Congress accountable for their votes? Visit the Oregon Fair Trade Campaign’s website at: http://www.citizenstrade.org/ctc/oregon/.