Early 2014 saw a marked upsurge in the number of mothers and children fleeing violence in Central America. Troubles with family, gangs and drug cartels (to name a few) in El Salvador, Honduras and Guatemala has pushed these families to seek asylum in the United States–the country ultimately responsible for much of their distress.

The violence from which they are seeking relief has deep roots in various US interventions in the region. From the Dirty Wars of the 1980s, to the drug war, to the 2009 coup in Costa Rica, the US has consistently supported governments and policies that have time and again predictably proven detrimental–and sometimes deadly–to the people it claims it is trying to help. US actions in the region have always been about expanding its own power and influence, with little to no regard as to how those actions affect the people living there. The result of over 30 years of US intervention has been destabilized governments, with gangs and drug cartels stepping in to fill the void.

With that history, one might believe that these mothers and children would be welcomed into the US with open arms as some recompense for damage done. But as has been seen over the past 15 years, there has been no such reception. Under President Obama, over 2 million immigrants have been deported, and on any given day there are 34,000 people in immigration prison, as required by law. These mothers and children have been placed in jails, euphemistically called family detention centers.

Along with this oppression of immigrants–which more honestly is the oppression of immigrants with brown skin–has come a strong movement against it. Simply put, people do not like seeing families torn apart. It’s why in the mid-2000s Immigration and Customs Enforcement (ICE) changed its strategy from massive raids that were so clearly breaking up families and communities to claiming–falsely–that it was only targeting criminals.

On June 16 at St. Michael and All Angels Church, 30 people watched a documentary about the family jails into which these mothers and children have been shunted, as well as how people have been organizing and fighting to see that they receive better treatment and a fair hearing as they apply for asylum. Titled No Sanctuary: Big Business and Family Detention (directed by Matthew Gossage; produced by Grassroots Leadership), the 30 minute film gives a history of recent family detention–a long history and the largest imprisonment in the US since that of Japanese and Japanese Americans during World War II–and shows the struggles faced by the mothers and children, as well as lawyers and activists fighting for justice. 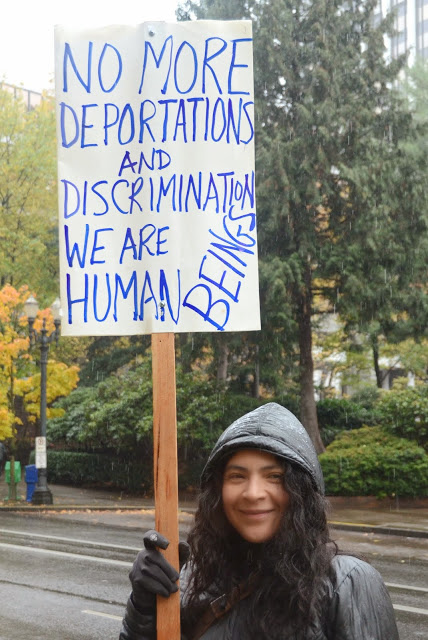 Those mothers and children have been treated exceptionally cruelly. In June 2014, the US opened a makeshift immigrant jail in Artesia, New Mexico that could hold 672 prisoners. The purpose of Artesia–and the three immigrant jails that have opened since–was not to provide safe shelter as these people sought asylum, but instead used to deport them as quickly as possible with no regard to due process.

Soon the Obama Administration was asking for almost $900 million for 6,300 new beds for detained families. Last July, Jeh Johnson, the Secretary of the Department of Homeland Security (DHS) appeared before the Senate Committee on Appropriations to testify that the funds would support “an aggressive deterrence strategy focused on the removal and repatriation of recent border crossers.” Three weeks earlier, Johnson had issued a memo in which he referred to this strategy as “detain and deter,” that is, put people fleeing horrific violence in jail and keep them there for as short a time possible before deporting them.

The money was not given, but the statement had been delivered: Don’t bother coming to the US, you can’t stay. It is almost fantastical to think that a mother who is willing to leave behind her home and everything she knows would heed these words and, in fact, the persistent immigration wave proves that these families are more strongly motivated to risk hostile conditions in the US than endure the horrific brutality they face at home.

Deter and detain was struck down in court, so DHS adapted and began saying these families needed to be jailed as a means of keeping them together. In jail these families are not guaranteed counsel, and it is particularly difficult to obtain a lawyer during detention. Without an attorney, it is often impossible to advocate for release or to adequately prepare for a court case. The average immigration court case takes 550 days before a judge renders a decision. But in Artesia, cases were being decided in an average of 17 days. Bail, if granted at all, was set extraordinarily high.

Fortunately, when word got out, immigrant rights lawyers, law students, paralegals, and assistants–including some from Portland’s Immigrant Law Group and Lewis and Clark Law School– began descending upon Artesia. By the time the prison was shut down on December 15. immigrant rights lawyers had helped its prisoners achieve over an 85% pass rate for their Credible Fear Interviews (CFI), a screening test that that determines if a person has significant standing to receive an asylum hearing. (Prior to lawyers’ arrival at Artesia, the passage rate was just 37%).

On the downside, private companies whose shareholders have an interest in the expansion of the prison system opened family prisons to replaced Artesia. Two of them–one in Dilley, Texas and the other, the reopened T. Don Hutto prison–are run by Corrections Corporation of America (CCA), the largest private prison corporation in the world. GEO Group runs the other family jail, the Karnes County Residential Center, also in Texas. Combined, all three prisons can hold about 3,500 people. 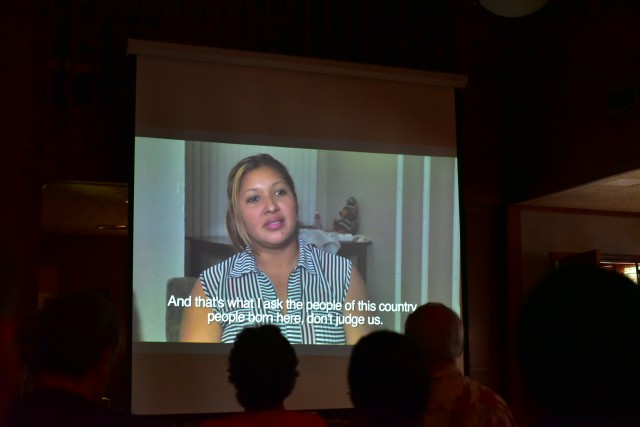 A still shot from _No Sanctuary: Big Business and Family Detention_, the film directed by Matthew Gossage and produced by Grassroots Leadership. Photo by Pete Shaw.

Prisons–public and private–are not child care facilities. And prisons in the United States exist to punish, not reform, criminals. These mothers and children–who are running away from being the victims of crime–are being placed in an environment not designed for them, and one not up to international standards. According to a report from the United Nations Refugee Agency, “All appropriate alternative care arrangements should be considered in the case of children accompanying their parents, not least because of the well-documented deleterious effects of detention on children’s well-being, including on their physical and mental development.”

In No Sanctuary, viewers see hardly used playrooms–the children spend most of their time in their cells, although they do get outside for the 8 or 9 times a day they have roll call. They are not happy and their mothers are clearly distressed, as one would expect any mother to be under such conditions.

Advocates for these mothers and children have been pushing for pre-asylum hearing Alternatives to Detention (ATD) similar to those often used in during pre-trial periods in the US criminal justice system. These include being released on supervision, bail, or recognizance.

These alternatives are not only better for the families, but also for US taxpayers. According to Human Rights First, ATD’s daily cost ranges from 17 cents to $17 per person, while prisons eat up about $164 a day per person. Furthermore, 99% of people in these ATDs, appear for their final hearing, thus putting to rest nearly all worries that asylum seekers run off if not imprisoned.

Still, even these ATDs have some private prison imprimatur upon them. One of them, Intensive Supervision Appearance Program (ISAP) II, is run through a contract with GEO Group.

There are, however, community-based alternatives that currently are not funded by the government. According to the American Civil Liberties Union, these community support programs “provide case management and referrals to legal and social services providers for non-detained individuals. Studies have found that such support helps people understand their legal obligations and improves court appearance rates and compliance with final case outcomes, while minimizing the damage to their mental and physical health and the disruption to their families and communities caused by institutional detention.” 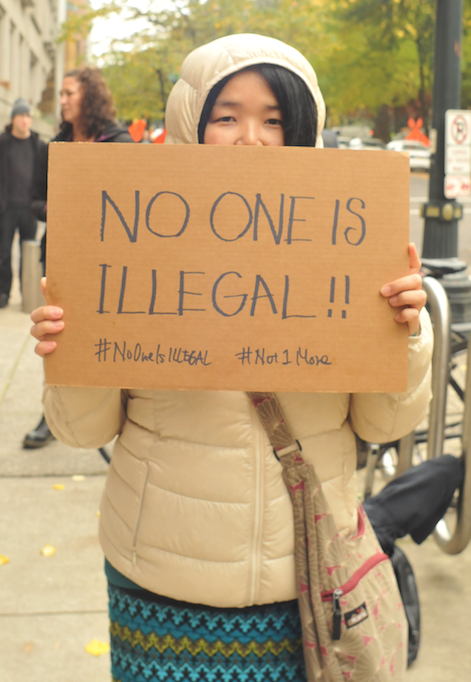 Advocacy and resistance–which has included at least two hunger strikes in Karnes–appear to be working. After the film, students from Lewis and Clark Law School, talked about their experiences at the prison and the effects they have seen from activism both inside and outside the jails.

Take bail as an example. As part of the deter and detain strategy, no or very high bail–$20,000, which may as well be $10 million–was offered. Now judges have begun to lower bonds, and according to the law students, more and more immigrants are using the minimum bond. Without both bond and ATD, it is incredibly difficult to prepare for an asylum hearing which includes a 300-page application, research, and interface with lawyers.

On June 24 the Obama Administration announced it would seek to reduce the long-term detentions of these mothers and children. Those families with relatives in the US who sponsor them will now be offered bond when they apply for asylum. “I have reached the conclusion that we must make substantial changes in our detention practices with respect to families with children,” Johnson stated. “In short, once a family has established eligibility for asylum or other relief under our laws, long-term detention is an inefficient use of our resources and should be discontinued.”

Johnson announced that he had approved a plan “to offer release with an appropriate monetary bond or other condition of release to families at residential centers who are successful in stating a case of credible or reasonable fear of persecution in their home countries. Further, (ICE) Director Saldaña has also presented me with criteria for establishing a family’s bond amount at a level that is reasonable and realistic, taking into account ability to pay, while also encompassing risk of flight and public safety.”

Other reforms include “reviewing the cases of any families detained beyond 90 days to evaluate whether detention during the pendency of their immigration case is still appropriate” with priority being given to “the review of the cases of families who have been in these residential centers the longest,” and discontinuing the invocation of “general deterrence as a factor in custody determinations in all cases involving families.”

Karen McMahon of Immigrant Law Group described the issue of family detention being at a tipping point. With this latest announcement from Johnson, it is clear the tip has begun, a testament to the power of organizing and resistance. But it is not complete. Over 130 members of congress have sent letters to President Obama asking him to end–not reform–family detention. In Oregon’s delegation, only Representative Blumenauer and Senator Wyden have signed on so far.

“Pressure to end family detention is mounting and has already garnered small victories but we cannot stop until the detention centers have been closed,” said McMahon. “Oregonians must ask their congresspeople to speak up and tell the President that we won’t stand for the inhumane and unjust treatment of asylum seekers. We do not support locking up mothers and children–for any amount of time–who have fled their homes to ask for protection in the United States. Our country is better than that.”

Want to get involved?

This work costs money.  If possible, make a donation at www.caraprobono.org.

To screen the film No Sanctuary: Big Business and Family Detention go to: http://grassrootsleadership.org/host-screening-no-sanctuary.