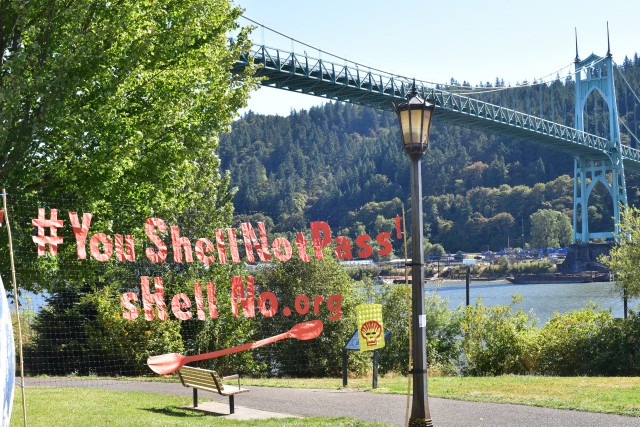 A flotilla of kayaks and motorcraft took the Willamette River at 2:30 AM this morning to prevent Shell Oil from sending the icebreaking boat Fennica from Portland to the Chukchi Sea in the Arctic where it would help the petroleum company explore for oil. The boat is in Portland for repairs, and is also carrying an important piece of equipment necessary for capping a well in case of a blowout.

Organized by various local groups such as Portland vs. Shell, Portland Rising Tide, and the Climate Action Coalition, as well as Idle No More, over 200 people gathered–including over 50 on the river–to keep the Fennica moored.

The protest and rally come as the impacts of climate change are being clearly seen throughout the western United States, as well as the rest of the world. California, as well as much of Oregon are suffering terrible drought. The rivers in Oregon have heated up enough that huge numbers of salmon have been dying off, including upward of 50% of sockeye. Despite the propaganda of the petroleum industry, climate scientists have clearly shown that climate change is fueled by fossil fuel consumption–reason alone to halt oil expansion. 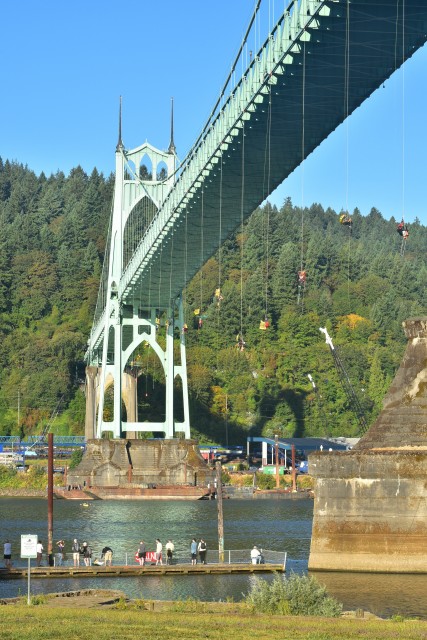 Greenpeace activists dangle from the St. John’s Bridge in an effort to keep Shell Oil from drilling in the Arctic.

Despite this, the Bureau of Ocean Energy Management gave Shell conditional approval to explore in the Arctic in May.

Drilling in the Arctic presents its own problems. The Bureau of Ocean Energy Management of the Department of the Interior states there is a 75% chance of a major oil spill (a spill of over 1,000 barrels) in the Chukchi Sea over the next 77 years.

In addition to the action on the water, 13 members of Greenpeace rappelled from the St. John’s Bridge to a height that would prevent the icebreaker from passing. They expressed their intention to stay there for at least a few days or until extracted. According to a Greenpeace blog post, “The climbers have enough supplies to last several days, and are prepared to stay in Shell’s way as long as possible.”

On Tuesday night as kayakers made preparations for their action, there was little nervousness to be found. People understood the possible dangers, including risk of arrest. To them, the issue was clear: Shell had to be stopped, and if President Obama was not going to take action, then they would. And while there has been some movement toward a political solution with Oregon’s Senator Jeff Merkley introducing a bill to stop Arctic drilling, so far only six senators have jumped on board.

“We are living on the precipice,” said Antonio Zamora, who has been active in fighting Arctic drilling, and was readying to take to the river. 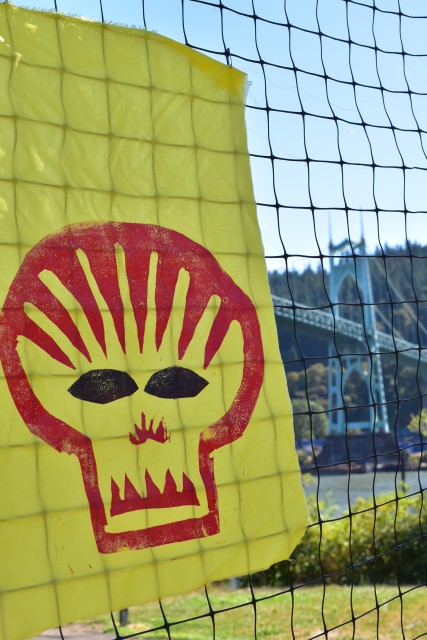 Wednesday morning found a group of about 50 “kayaktivists” and supporters gathered in Cathedral Park, getting some rest and planning their next move.

“Who here thinks that we kicked some ass?” asked Michael Gaskill. “We are effectively keeping this icebreaker from getting to the Arctic. I feel so inspired right now.” The loose, jovial crowd clearly agreed.

When Gaskill asked how many people were willing to be arrested in order to keep the icebreaker from leaving Portland, nearly everyone raised a hand. They also expressed solidarity in protecting the Greenpeace activists suspended under the bridge.

As of press time the departure of the Fennica –first reported as 10 AM and then pushed back to 2 PM–appears hung up by the protest, proving, for now, that Shell’s Arctic drilling is not set in stone, and the action is not the “stunt” NBC news declared it to be. Winter is looming in the Arctic, and if the Fennica is delayed long enough, Shell will miss its chance to drill before the Arctic ice closes in again.

Special thanks to Erick Crash for his help on this article.

Want to get involved? There is a celly to get updates on how to keep Shell from drilling in the Arctic. Dial 23559 and text “@shellnopdx”.

Come down to Cathedral Park and help out. Even if you do not want to go out on the river, people could use food, drink, and kayaks.