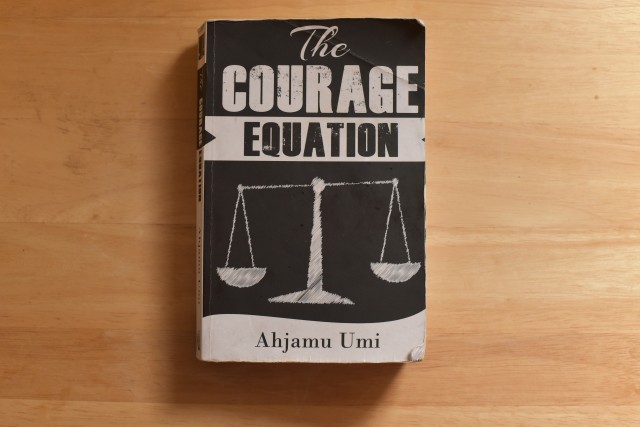 Frederick Douglass once stated that power concedes nothing without a struggle, and history certainly bears that out. The struggle to wrest power away from those who hoard it in vast disproportion is a story that is given short shrift in US history textbooks, the preferred narrative being a combination of the myth of rugged individualism and equal opportunity that creates a singular society free of any sort of divisions.

If those divisions may have once existed, the country has learned from its mistakes–we are constantly reminded–such that we now live in a “post-racism America.” It is a United States where one Black person is killed every 28 hours by police and vigilantes, where Michael Brown has become a household name, and where “I Can’t Breathe” has a meaning of horrible specificity. Black Lives Matter? Not yet.

So the problem persists and thus the struggle to surmount it. But how shall we overcome? How should historic victims of terrorism–particularly that of the state or given the state’s imprimatur–defend themselves? And how should those of us who oppose–yet benefit–from that terrorism work to get rid of it?

Ahjamu Umi poses some answers to these questions in his novel The Courage Equation, which he released earlier this year. Umi, who is my friend, is an organizer and activist, and he is also a member of the All-African People’s Revolutionary Party (A-APRP). He is a stalwart fighter for human rights from a Pan-African perspective, although he might well say that this description is redundant. The Courage Equation is in many ways an extension of his activism.

Umi’s plot revolves around Boahinmaa Omawale (formerly Ashley Summers), a white Oregonian who has returned to her former home after establishing a school for ideological training in Accra, Ghana, dedicated to helping create a unified socialist Africa. Her husband, Adisa, is in charge of relocating some 800 Black people from Los Angeles to Central Oregon as part of a diversity project. The Patriotic Front (PF), a group of neo-Nazis with connections within the local police, has been terrorizing Central Oregon’s newest citizens with many Black children disappearing without a trace.

Boahinmaa has a history with the PF. Three years earlier her friend, Shelly, had infiltrated the group and uncovered a plan of violence. Adisa, trained in military tactics and already wanting to fight back, became further emboldened, but Boahinmaa–then Ashley–thought it would be better to go the police. She told a detective about Shelly’s findings. That detective was the founder and leader of the Patriotic Front, and with a few of its members, tracked down Shelly, raping and murdering her.

After a spell of self-destructive behavior, Boahinmaa has regained much of her balance and is now ready to fight. Protests and marches alone are clearly not going to solve this problem. At best, those tactics without self-defense may result in reforms that will still allow terrorist groups like the PF and the police who are in cahoots with them to continue festering. At one time Boahinmaa felt “a violent solution was not a solution at all, no matter how much we suffered because of the Neo-Nazis.” But after her experience with the police, and with the terror against Black people in Central Oregon continuing unabated save for numerous Black people having come to the town to provide support and form an armed militia that keeps the PF at bay for a short time, Boahinmaa concludes there can be no alternative. These are the decisions people must make when a state founded upon white supremacy ferociously represses any challenge to its authority and effectively countenances terrorist white supremacist groups such as the PF doing its work.

Long time allies join Boahinmaa and Adisa, and after a period of training, they begin fighting back, killing some of the higher-ups in the PF. But the leader of the PF, Dan Sands, remains at large, having fled to Mississippi. The remainder of the book is largely a thriller as this group, particularly Boahinmaa, search for Sands in order to mete out justice. There are twists and turns along the way, including one character, Margaret, a PF member who is part of a failed assassination attempt against Boahinmaa in Accra who later embraces the goals of the A-APRP. 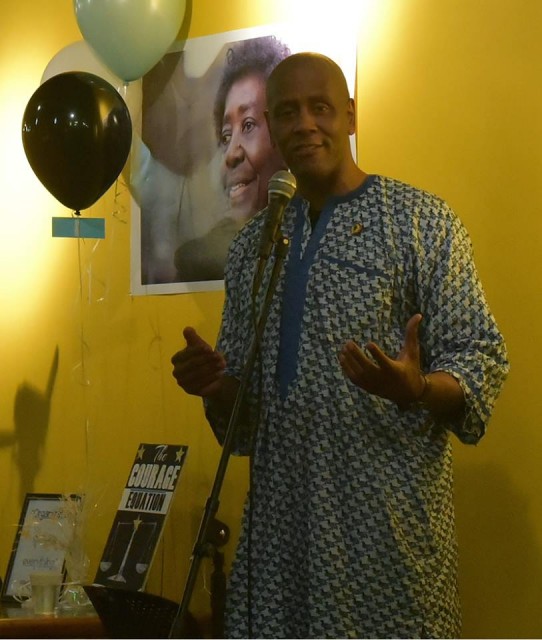 Ahjamu Umi at the February book release celebration for “The Courage Equation.”

The story is gripping and well paced. Intense action scenes easily transition to meditative moments, and the narrative moves pretty seamlessly. Even without its political statements, which include gender issues, patriarchy, and the responsibility white people have to destroy white supremacy, this would be an exciting tale. But at a time when much of the country remains in denial of its misogyny and its attendant rape culture, and when every day brings another report of police profiling, brutalizing, and sometimes murdering people of color while white supremacists feel their rights are being violated because the Confederate flag is under attack, those political pronouncements have heightened resonance.

There are some flaws. The prose at times becomes too didactic in explaining the politics of the A-APRP. This is unnecessary as Umi at other times conveys those points far more powerfully through his characters’ thoughts and deeds. The secondary character of Margaret could be fleshed out better and her conversion from a white supremacist to a supporter of the A-APRP seems too easy and too quick, especially for such a pivotal character. Similarly, Dan Sands, as well as Lou Rallig–a politically powerful racist who takes a liking to Boahinmaa and has knowledge of Sands’ whereabouts in Mississippi–feel incomplete. We know the type of people they are, but how they got to be that way remains in the dark beyond a few slight references that seem more coincidental than meaningful.

These are academic considerations, however, and if the development of those contingent characters feels lacking, it is only because in Umi’s hands Boahinmaa’s evolution is so rich. I once heard Umi say that when women talk about women’s issues, he finds it best to shut up and listen because they know best. Fittingly, Umi does not impose on Boahinmaa. The character develops organicly. She is not perfect: she is a work in progress, grappling with demons and issues ranging from the personal to the worldly. But she demands respect for her capacity to act in her own agency, and to deal with the consequences of those actions. When Adisa takes her to task for not formulating his idea of a good plan, showing a lack of trust in her, Boahinmaa rebukes him, saying her work has brought them very close to Sands. “In fact, I’ve behaved as any conscious soldier should act on this type of mission, and my work is the reason we will know, very soon, where Dan Sands is. I’m not going to apologize to you or anyone else for that. I’m also not going to let you treat me like I’m ill-responsible.”

This is not the first time Adisa has had “several disrespectful and sexist interactions” with Boahinmaa, and when she calls him on this, he apologizes and notes that he is not perfect. Boahinmaa replies, “It’s not about perfection. It’s about respect. You don’t have to be perfect to recognize that I deserve more respect than I’ve received from you.”

Likewise, other strong women appear. Le Ann and Cynthia assert themselves within the Oregon strike group. Margaret holds her own as she confronts her past. And an elderly maid, Doris, who otherwise might be stereotyped as feeble shows a wisdom and dignified resolve born from years of struggle. They and other strong women work together to achieve their goal. And they understand full well that their goal–killing Dan Sands–is punishable both by law and vigilante vengeance. Those laws, however, have been crafted by those who benefit from and uphold white supremacy, and it is those laws that allow groups like the PF to operate with impunity.

At a forum in March that Umi moderated titled Ferguson is Everywhere, one of the panelists, Walidah Imarisha, noted that if white people are really principled on the issue of non-violence, they should recognize “the functioning of this American system is the most violent process ever seen in history” and be committed to stopping it. Part of that system are white supremacist groups such as the Ku Klux Klan who despite a legacy of terrorism function quite freely, while groups like the Black Panther Party who had a far more rational and reasonable understanding of self-defense than the Klan has ever embraced literally found themselves in the crosshairs of the US government.

And so Umi’s book presents some uncomfortable questions to those who engage transformative liberation movements. The foremost of these are how far people are willing to go to defend themselves and how far allies are willing go to defend those who are subject to terrorism because of the color of their skin. Umi is not calling for aggressive violence, such as that used by terrorist white supremacist groups.  This is about people defending themselves against that terrorism. As Umi notes, “Malcolm X said extreme circumstances require extreme responses. Perpetrators of state sanctioned or supported violence against oppressed people cannot be shocked when people decide to organize and defend themselves.”

Many people–I among them–claim to eschew violence. But at least with myself, that is probably not true. For example, if someone was hurting my wife, I would suffer no moral dilemma about doing whatever I could to stop that. But where do we draw lines beyond the personal? And why is it not personal when Black people are being systematically terrorized by police, quasi-police, and white supremacist groups? After all, terrorist white supremacist groups regard those who work with Black people for greater justice as race traitors and just as worthy of their wrath.

I still do not feel comfortable with the idea of taking up violence against others beyond self-defense in the face of imminent danger. But after reading Umi’s book, I find myself less comfortable with how I have defined what dangers qualify as imminent.

Ahjamu Umi’s The Courage Equation is available at Powell’s City of Books and as well may be ordered at other bookstores.