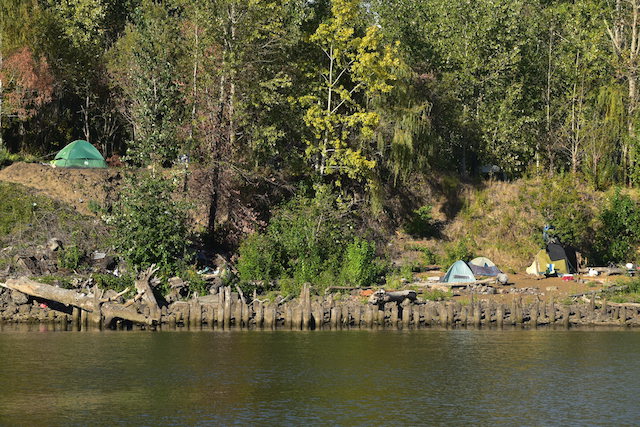 Anne Christopher of the Environmental Protection Agency (EPA) and I have a few things in common. We are both from New Jersey, and thereby, as the joke would have it, we both are intimately knowledgeable about toxic waste. Now, 3500 miles away from our roots, we are again sharing a close connection to toxins as we stand on the bow of the Willamette Star, heading north on the boat’s namesake, toward the Columbia River where we will be shown the poisonous areas of the river, as well as hear about EPA and Oregon Department of Environmental Quality (DEQ) efforts at cleanup.

While I am interested in the work they are doing, both for the sake of the river and the surrounding lands, as well as because my father used to work for the EPA, I am here because Ibrahim Mubarak, one of the founders of Right 2 Dream Too (R2DToo), the rest area for people without housing, invited me. On a day so beautiful as this one, with the temperature in the low 70s, the sky a brilliant blue punctuated by puffy clouds, and a slight breeze blowing, a free boat ride has proven irresistible.

Prior to boarding, I am offered a series of handouts, one of which shows a map of the Portland Harbor Superfund Site. Between the Willamette Star dock near the new Tilikum Crossing, and the Fremont Bridge, there are few notations on the map; however just north of the Fremont, there are 14 sites listed as “high priority,” 12 as “medium priority,” and 15 as “low priority.”

The poisons, according to the Lower Willamette Group, are mainly four types: PCBs (polychlorinated biphenyls), dioxin, pesticides–particularly DDT and its related breakdown products, and PAHs (polycyclic aromatic hydrocarbons). At some point, someone from DEQ also mentions mercury and petrol hydrocarbons. Though I am not 100% sure what all these chemical are, I am confident I would rather not ingest any of them.

During the recitation, I sing to myself the opening lines of The Kinks’ “Waterloo Sunset.” Dirty old river, must you keep rolling, flowing into the night?

But for now, this is is beautiful Portland–or at least a beautiful facade. Passing under the bridges, which I have never done before, is wonderful. The buildings, old and new, form a nice backdrop to the river. Even the US Bank Tower, whose nickname shall not be used out of respect to Bob Dylan and The Band, is pretty. I’ve walked, biked, and driven by all these, but from the river, I am seeing most of it anew.

The landscape changes. There is the dry-dock that recently held the Shell icebreaker that was delayed for nearly two days by the Portland and Greenpeace activists’ blockade. Over there is a ship-building facility. We encounter sites where it’s fairly obvious that bad things are being emitted, such as Exxon-Mobil (high priority) and Owens-Corning Fiberglass (medium priority). Then there the places that are just ugly. Big piles of rusted scrap metal near the Oregon Steel Mills site, or was that Schnitzer Steel? 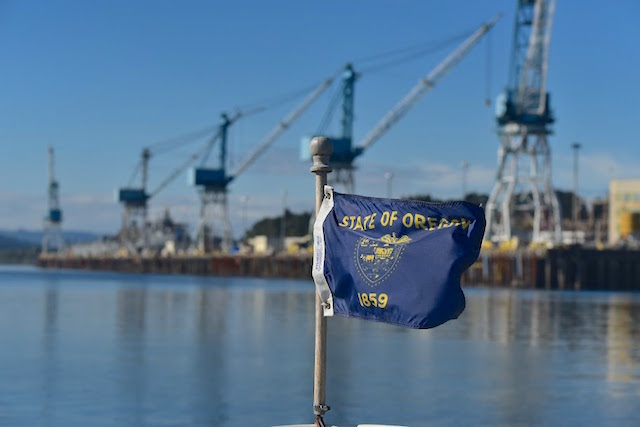 Up here the river is a place of industry, and it is that industry that has polluted the area.

There are also people here. Along the sides of the river are encampments, presumably people without housing. They are the reason Mubarak and the other people associated with R2DToo and R2S are on this boat. Mubarak has been working to educate people without housing, such as those we see camped out, about the dangers posed by the Willamette River. Alanna Conley of the EPA mentions how Mubarak has brought forth to her the voices of the people along the river, and while the EPA does not specifically craft policy regarding people without housing, she notes that all public input must be considered. That public input can be made now, but it will be really important starting early next year when cleanup policy–how people are informed of work, who gets jobs, and how people get training for those jobs, just to name a few–is cobbled together.

For now, a little knowledge could go a long way. A handout from the Oregon Health Authority (OHA) says that tests show high PCB levels in carp, bass, and catfish–resident fish of the harbor. Their recommendations are startling. Women of childbearing age–between 18 and 45–should not eat these fish. Healthy women beyond childbearing age and healthy adult males should have “no more than one 8-ounce meal per month.” OHA says that PCBs are “highly persistent chemicals that can build up in the food chain.” That is, they stick around a long time, starting with animals that eat food in the sediment, get eaten by smaller fish, who are then eaten by larger fish. Thus, the larger resident fish tend to have the most contamination of all in the cycle. 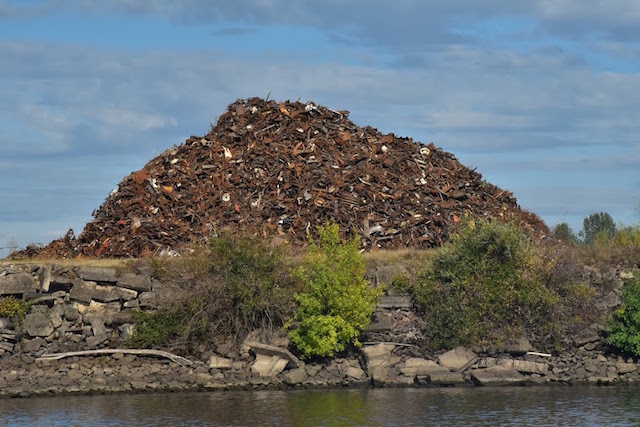 However, the OHA says there are no restrictions on non-resident fish such as salmon and steelhead. I note to myself that I will avoid any fish caught up here between the Fremont Bridge and Sauvie Island, while recognizing that the people encamped on the banks, who I am told eat fish from the river, don’t always have that choice.

The folks from the EPA and DEQ talk about how those toxins are not in the water itself–although they are not asking anybody if they want to take a dip–but rather in the sediment, both at the bottom of the river, as well as on its banks. I hear numerous people mention how some people without housing grow food in that soil on the side of river.

When we pull into Willamette Cove on our way back, a man named Dwight Leslie, whom I think works for the DEQ, talks about the history of the place. It had a dry-dock that was heavily used during both World Wars and the Korean conflict. There were also timber related industries, including lumber and plywood mills, and barrel manufacturing. Those industries dried up by the late 1960s and left behind heavy metals, diesel fuel, PCBs, and dioxins in the soil in most of the cove. According to a DEQ fact sheet “some of these contaminants have been identified as unacceptable risks to users of the property.” 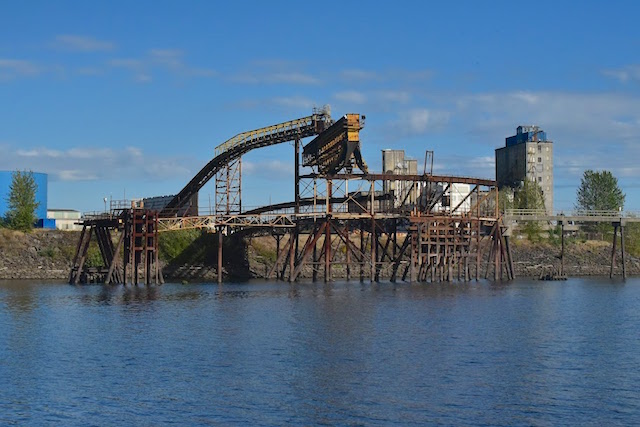 Dan Hafley of the DEQ, who is managing the cleanup here, then starts talking about the work that needs to be done to mitigate the damage. About 20 feet inland from the shore are plastic orange fences, marking the high point of toxic pollution. In November, much of that dirt–about 5,000 cubic yards–will be removed, put in trucks, and taken to the Wasco County Landfill. It is, as with most of the dirt on the shores of this portion of the river, dangerous stuff.

Earlier, Leslie had mentioned the signs around the cove warning of the perils of the poisons, yet right there in front of us are some tents, people, and their pets. It strikes me as no small irony that they must feel this is a place where they are less likely to be rousted by the police, though in settling here they will face much greater unseen dangers.

Hafley registers concern about people without housing setting up shelter in these toxic areas. He says that making skin contact with contaminated soil, inhaling contaminated dust, or ingesting contaminated food–that is, taking poison into the body–should be “avoided at all costs.” Interestingly, another handout from the OHA says “the levels of chemicals found in the water, dirt and sediment do not pose a health risk for recreational users, including children.” Clearly, the people we are seeing in the cove are not recreational users. 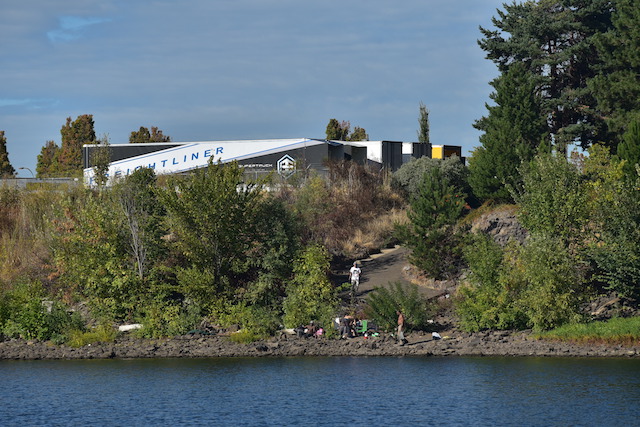 Ten years ago Portland and Multnomah County set forth a plan to end houselessness. It is no surprise that it failed. What is shocking is that it failed so badly–or for the cynics, perhaps succeeded so grandly–that some people without housing feel the need to sleep in areas that almost without doubt will severely shorten their lives. I feel angry that our leaders constantly make excuses for the corporations that so foul the air, earth, and water–giving them chance after chance and dollar after dollar, despite every shred of evidence that shows they will continue to pollute–and so few chances to real living people like the ones who have set up camp in Willamette Cove. These people are not responsible for despoiling the river and have committed no horrific environmental crime but there will be few funds allocated for their welfare.

All the same, I am honored to be in the presence of these good people from Right 2 Dream Too who continue fighting not only for themselves, but for all people without housing whom the leaders and much of the business community of Portland have treated little better than these companies have treated our river.

As we head back toward the dock, the sun is getting low. There is a glow, what the photographers call the golden hour. It is almost beautiful enough to forget the horrible implications of the past couple of hours. There is a question and answer session. Someone asks Christopher and Conley if any funds for the river cleanup are being set aside for relocating people and assisting people who get sick from the toxic stew. They are not sure and suggest people check with the City to see if they have something available.

The prospect distresses me.