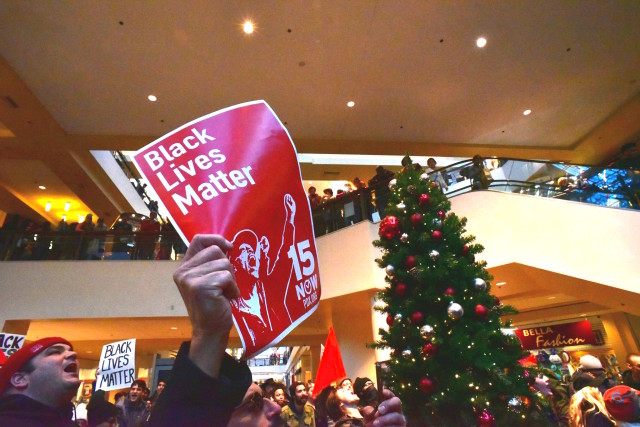 Over 300 supporters of Don’t Shoot Portland and the Black Lives Matter movement gathered in Holladay Park on Friday November 27, making demands ranging from police reform to the abolition of capitalism that has created a system where Black lives do not matter. The rally also included a boisterous march through nearby streets that occasionally backed up traffic and culminated inside the Lloyd Mall.

“We know that we live in a society that pushes a consciousness that says you don’t matter,” said Teressa Raiford of Don’t Shoot Portland. “How dare we accept the opportunity to let our children be handed this shit? To be embarrassed to say Black lives matter.”

The event came two days after the one year anniversary of a grand jury refusing to indict Ferguson, Missouri police officer Darren Wilson for murdering Michael Brown on August 9, 2014. Racist messages on the social media site Yik Yak aimed at Black Lewis and Clark College students and an attack by 3 white men on a Black student at the school gave the rally added tension. So too did the recent finding that the Oregon Department of Justice was spying on the Black Lives Matter movement in Oregon. Earlier in the week Portland police officer John Hurlman had posted a belittling message on Twitter reading “Black Lives Matter is planning to protest at Lloyd Center on black Friday. Oh joy, stuck late again at work to babysit these fools.” 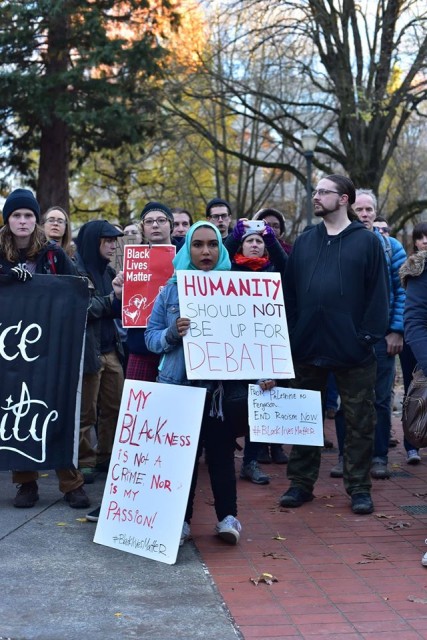 The most obvious specter hanging over the rally was the Chicago Police Department’s (CPD) murder of Laquan McDonald on October 20, 2014. McDonald was shot 16 times, and Officer James Van Dyke has been charged with first-degree murder. Dashboard camera footage of McDonald’s murder finally was released earlier in the week–400 days after McDonald was killed–showing that police lied about the circumstances surrounding McDonald’s murder, relying on the all too usual story that the officer shot to protect himself. The footage was released only because Cook County judge Franklin Valderrama ordered it, and it can hardly be a coincidence that Van Dyke was finally indicted the same day its horrific images were made public.

“We understand this is a very real land of danger,” said Alyssa Pagan of Don’t Shoot Portland.

That sentiment has clearly been brought into the public eye  by high profile cases such as McDonald and Freddie Gray, and lesser known but equally beloved lives like Michael Lee Marshall and Chandra Weaver.  As of November 30, at least 1,083 people in the US have been killed by police in 2015–an an average of more than 3 people a day. It’s a number that is impossible to escape.

“Right now Black people are being slaughtered,” Magic told the crowd. “We’re being mowed down. Our civil rights are being trampled. That’s why we say Black lives matter.”

Coinciding with Black Friday–the so-called busiest shopping day of the year–the rally highlighted various alliances, including with labor justice groups such as $15 Now, pointing to a solidarity that demands systemic change over reform; that demands a system that values people’s lives over bottom lines.

“Capitalism is a system that is inherently based on profit–on profit before people,” said emcee Lamarra Haynes. “The system is rotten to its core. I don’t know about you, but I am going to help tear the fucking shit down.”

The crowd boisterously agreed with Haynes, shouting, “What do we want? Revolution! When do we want it? Now!”

But this day was hardly about shouting slogans. Speakers put forth analysis of how capitalism works to create the oppression of many for the reward of a few. Haynes, for example, addressed the issue of why there was a dearth of Black people at the rally. Holladay Park is located, she explained, at the far end of what was once Portland’s Black community, but because of redlining, other forms of discrimination and outright land grabs (Memorial Coliseum, for example, destroyed numerous homes and Black owned businesses) have forced many Black people to leave their homes. Many of those people, scattered wide from a common place, would have to devote much time and effort to get to the rally and, furthermore, many of them work in low wage jobs, such as retail, that required them to work on this day.

“It keeps getting back to capitalism,” said Haynes. “If you keep getting 75 cents per white man dollar, this happens.”

Andrea Latrice, an organizer with Portland Jobs with Justice, echoed Haynes’ words. “Black people and capitalism do not mix. They are like oil and water. This country is built on my getting paid 75 cents for every dollar white men make.”

“I do not want this for my children,” said Jamila, who was attending her first protest. “Money should not rule people. We all want to be a community. To live, to support, to make it in this life.”

Pagan, after leading a call and response with the crowd featuring 14 names of Black people murdered by the police, reminded the crowd that all of them “were from impoverished neighborhoods.” She made clear the difference between poor and impoverished, noting that the latter is imposed. The economic inequality and injustice experienced by Black people and other people of color is no accident, and neither is the state sanctioned violence of the police that has always existed to keep down people who might otherwise rise up and try to overthrow the capitalist system.

Saying “capitalism requires that most people live in poverty,” Pagan told the crowd that the $15 Now campaign, which is seeking to raise Oregon’s minimum wage to $15 an hour, was “working on purpose with Black Lives Matter.” 15 Now Oregon has been present at numerous Black Lives Matter movement events. 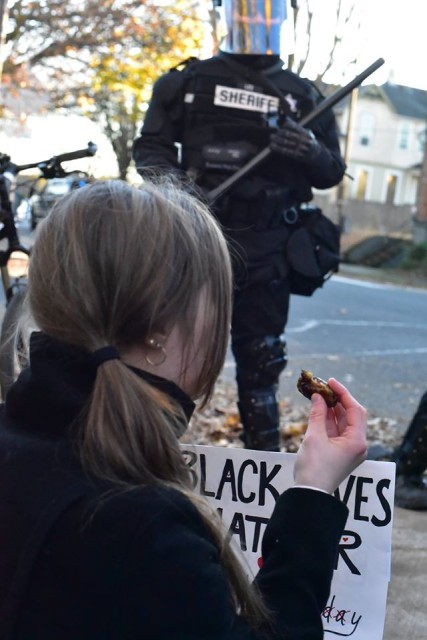 “It’s no accident police are beating and killing young Black people because they are on the street, marginalized by low wages,” said Jamie Partridge, an organizer with 15 Now Oregon. He then talked about how the Democrats–supposedly the party of working people–despite holding both houses of the Oregon legislature and the governorship, had not delivered a minimum wage raise. Thus, Partridge and other organizers have been gathering signatures for a 2016 ballot initiative.

Partridge found the initiative route fitting. He noted how the greatest gains for workers have come when they have taken matters into their own hands, particularly using the strike. The current minimum wage fight, he noted, started when 200 fast food workers–without any union protection–walked off the job, demanding a higher wage. Similarly, the Black Lives Matter movement has seen its various groups promoting numerous tactics, ranging from working inside with legislative bodies to engaging in demonstrations and acts of civil disobedience designed to force change from the outside.

Following the rally, the crowd took to the streets–shadowed by police on bicycles–heading west on Multnomah, then up Martin Luther King, Jr. Boulevard. The march then suddenly turned around and it appeared as if people were heading for the Broadway Bridge. At Williams and Tillamook, marchers were confronted by about 15 police in riot gear, apparently intent on keeping the bridge open. Most people parked themselves on Williams, where a sitoff occurred for a few minutes, until protesters commenced their return to Holladay Park.

There, Raiford noted that Michael Brown’s body had lain in the street in Ferguson for four hours before being moved, and that the rally and march was supposed to last that long. However, just nearing 4 PM, the activists had been at it only 3 hours. Raiford then urged people to go into the mall, to continue the rally “because we are trying to stop a murder.”

The crowd paraded through the first and second floors of the mall, chanting slogans such as, “Black Lives Matter, not black Friday!” Many of the workers, including security guards, seemed interested in the action. Eventually, most of the rallyers gathered on the second level bridge over the ice rink, raising their hands in 4 minutes of silence for Michael Brown and all victims of police violence. Quite a few of shoppers also observed the vigil, after which the protesters exited the mall. 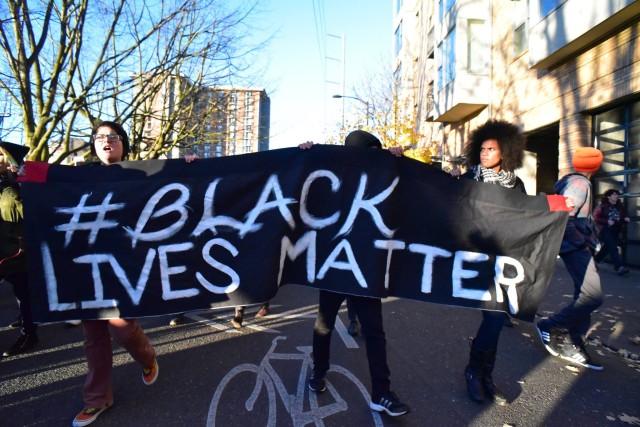 Since Michael Brown’s death, organizations associated with the Black Lives Matter movement have sprouted across the country. Groups such as Don’t Shoot Portland (which organized the rally) and Black Lives Matter Portland, led by young Black people, have brought together and worked with a wide swathe of people demanding change, even as reactionary forces that benefit from the status quo decry these courageous activists as divisive in their efforts toward crafting economic and social justice. They are galvanizing people, not merely to talk about how shameful these injustices and indignities are, but to take an active role in dismantling the institutions that uphold those abuses.

“I’m sickened by what I’m seeing in my society,” said Susan Anglada Barkley, who was Haynes’ Advanced Placement English teacher at Franklin High School. “We must be inimitable, ferocious, and united in our demand for change. They will say this movement is polarizing. We are here to say hate is polarizing. Murder is polarizing. Lies are polarizing.”