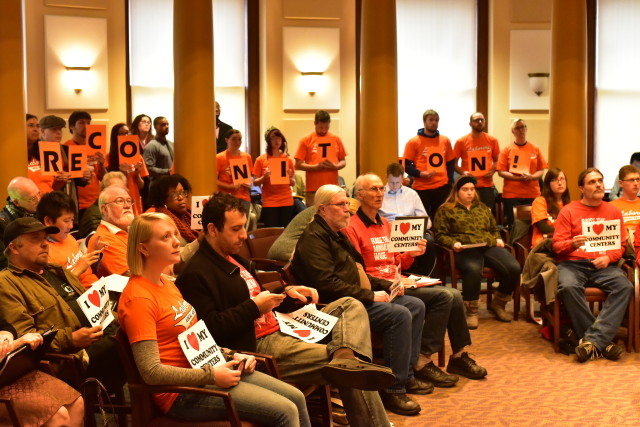 A petition signed by over 350 Recreation employees  was presented the Portland City Council on December 2, asking for a $15 an hour minimum wage, benefits, and more opportunity for year-round jobs. “I’ve seen excellent employees struggle with low wages and a lack of access to full time work,” said William Zeigler, a frontline staff member at Mt. Scott Community Center. “These staff members kept our community centers running even if it meant they weren’t making enough to live or had to work multiple jobs. Many great employees who had a real future with the City have left due to low wages and a lack of access to full-time work.”

At an October 21 “working families town hall” held at the SEIU Local 49 hall, Mayor Charlie Hales stated he would push the City council to voluntarily recognize Parks and Recreation workers as unionized workers: if they want to join the union–Laborers Local 483–then the City will recognize them as union employees.  Now Recreation workers are trying to hold Hales to his word. If placed in an ordinance, voluntary recognition would mean that the City would be a willing partner in negotiations over living wages, benefits, and other workplace protections. Erica Askin, Business Manager for Laborers Local 483, estimates that 600 to 900 Parks and Recreation employees would be affected, depending upon how their work is arranged.

Back in February, the council approved a resolution updating the City’s Fair Wage Policy, and on May 13 approved the actual amending of the policy, setting $15 an hour minimum wage for all full-time City workers as well as over 150 janitors, security guards, parking attendants, concessions workers, and other who work for companies that contract with the City. However, it left out over 1,800 part-time workers, most employed by Parks and Rec, which is overseen by Commissioner Amanda Fritz.

As a result, numerous “casual” Recreation workers still find themselves struggling with poverty wages. Portland has increasingly relied on casual workers to do the same duties as permanent employees. Unfathomably, their wage is based not on the work they do–which is the same as full-time employees–but on their status as part-time workers. Unlike those permanent employees, casual employees have no job security, and they receive significantly lower wages than their full-time counterparts. They are also limited in the number of hours they can work in a year.

Sarah Kowaleski, who has worked part-time at the Multnomah Arts Center for over 5 years, told the council how her work includes “booking important life events for my community, processing need-based scholarships, and connecting the public to social services in a multi-purpose building,” yet because she does not receive a living wage, she not only performs this work of connecting the public with social services, but also needs them herself.

“I have years of service to the City, and years of empty cupboards,” she said.

Kowaleski had given moving testimony regarding her difficulties making ends meet at the February council meeting–a problem hardly uncommon for casual Recreation workers–but last week she told the commissioners she was speaking “on behalf of hundreds of Rec workers–my colleagues who teach classes for our children, ensure pool and water safety, and support elders.” She noted how many Recreation staff have worked part-time for “9, 10, even 24 years, often without benefits and a living wage, job security, or basic workplace protections” and that “there are still hundreds of Rec workers struggling with poverty wages under this city’s employment.”

According to Laborers Local 483, Recreation part-time workers “typically earn $11 an hour.”  According to the Massachusetts Institute of Technology’s Living Wage Calculator, a person living in Multnomah County would need to make $11.25 an hour to cover basic living expenses. For a two adult-two child household, a living wage rises to $15.26 an hour. Both living wages assume full-time employment, 2080 hours a year.

Zeigler, who has been a casual employee for eight years at Portland’s community centers and outdoor pools, told the commissioners about his particular struggles to make ends meet. “I, like so many others, do not make enough to afford my own housing or transportation,” he said. “I also do not receive benefits–an overwhelming expense, especially as a person with a physical disability. I have spent my life in and out of medical debt and seen the stress it can put on families and households.” 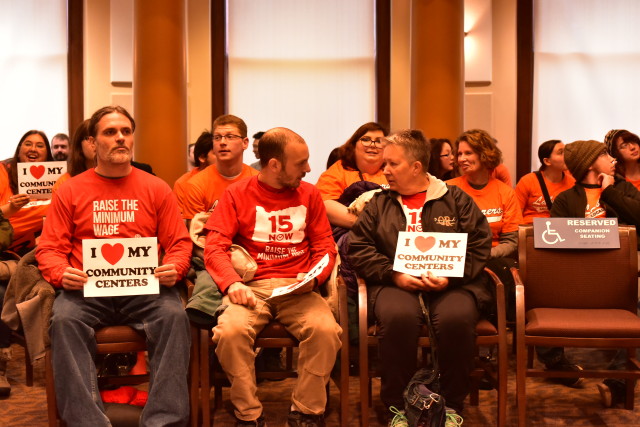 Voluntarily recognizing Recreation workers as unionized, Zeigler told the council, would open up “an avenue that could change the lives of potentially hundred of Recreation employees, the largest group of low-wage workers employed by the City of Portland. By using the democratic process of voluntary recognition, Rec staff will have the opportunity to gain access to benefits, living wages, and union protection. Staff will also be more likely to afford rent–something I have not always been able to do–and they will also be more likely to provide for their families.”

Kowaleski noted how the disparity of wages and benefits received by part-time workers was felt by the same groups of people who always seem to bear the brunt of inequality. “Portland is becoming more stratified by race and class, and the city government is no exception,” she said. “As we strive to implement equity in city services and internally, it gives me pause to know that casual workers who face low-wages are 20% more likely to be women like myself and 10% more likely to be people of color. In a city with the fastest growing rents in the country, we are also prone to the most displacement.”

State Senator Michael Dembrow and State Representative Lew Frederick attended the council meeting, supporting the Recreation workers. “We expect our public agencies to be role models for how to be good employers,” said Dembrow. “Recreation staff have been struggling for too long with low wages, no benefits, unpredictable schedules, and no workplace protections. These workers are doing what’s brave and right to join together for a union. Every employer, including the City of Portland, should recognize workers’ desires to better their lives and the lives of their families.”

Kowaleski asked the council to voluntarily recognize Recreation workers as unionized by December 16.