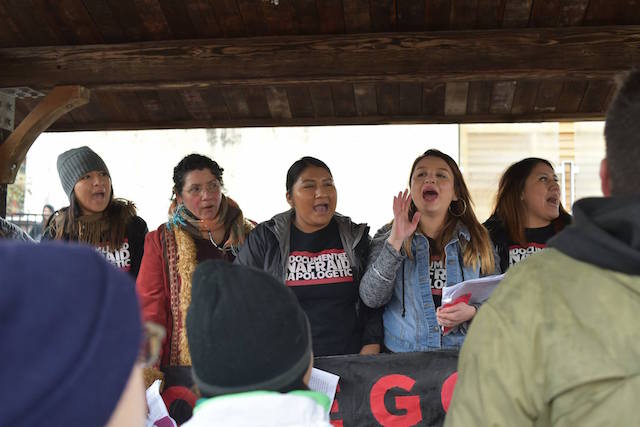 When a politician says he is going to do awful things, it is worth believing him. And when that politician is a bully like Donald Trump who seemingly possesses no moral compass, it is reasonable to be afraid. Therefore, it should have come as no surprise when his administration authorized the Immigration and Customs Enforcement Agency (ICE) to start rounding immigrants up with no regard to the hierarchy of priority that, at least in theory, had formed the basis of the Obama Administration’s immigration enforcement.

Immigrant communities already had reason to be scared. The presidency of George W. Bush saw numerous deportations, and President Obama’s administration oversaw a much greater number of people–over 2.5 million–ejected from the country. In theory, during the Obama years, ICE was supposed to focus on people without documentation who were criminal threats, but in reality the large majority of those arrested and deported were guilty of crimes amounting to little more than traffic violations. They were no threat to national security.

Now Donald Trump has more or less declared all 12 million people without documentation in the country a threat to national security, and, as his press secretary Sean Spicer has said, he has taken the shackles off ICE. According to Steven Choi, Executive Director of the New York Immigration Coalition, the result could be the expulsion of 25 million people from the US. 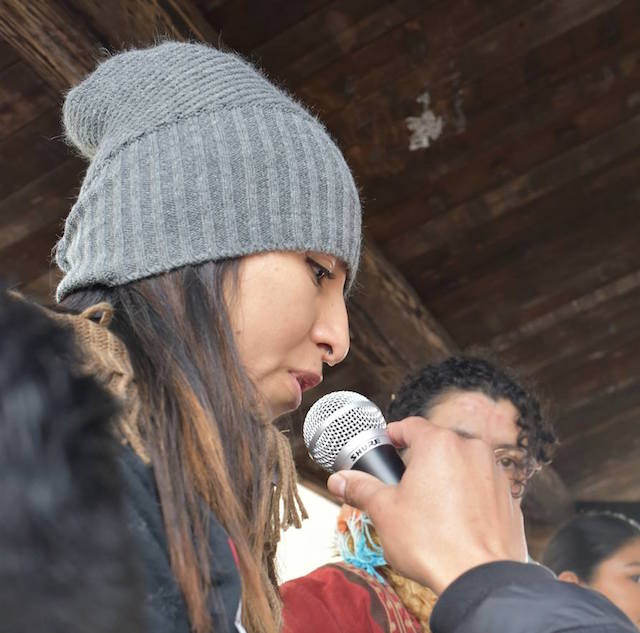 The 600 arrests ICE made in early February show that trepidation is well-founded. At a press conference last week at Augustana Lutheran Church where various faith and justice groups talked about the New Sanctuary Movement and the need to protect people under threat from the Trump Administration, Romeo Sosa of VOZ estimated that he had received between 50 and 75 calls alerting him to ICE agents snatching people off the streets, yet only two of those calls proved true.

This is not to say that the hysteria is misplaced: the fact of those 600 arrests makes that clear. If deported, they, their families, and their communities–our communities–will face dire consequences. that will rip holes which may never be mended. Children will be left motherless and fatherless. The impact will be devastating.

But if there is fear, there is also courage.

On February 27 a crowd of about 200 people gathered only a few feet away from the ICE jail in southeast Portland. Many of them were without documentation, boldly opposing Trump and ICE by “coming out of the shadows,” telling their stories to the crowd. Students, parents, organizers, mentors, feminists, sisters, sons, daughters, and other manner of descriptors, they all declared themselves undocumented, unafraid, and unapologetic. As well, many in the crowd had come to stand in solidarity with their community members who lacked documentation. Beholding their courage and defiance was exhilarating.

That fortitude is nothing new. On May Day 2006, tens of thousands of people without documentation took to the streets in cities throughout the country as a response to the draconian immigration bill proposed by Republican representative James Sensenbrenner. I remember that day, standing by the Schnitzer concert hall, watching this massive, congested throng pass by for at least a half hour. Since then, numerous times I have witnessed people without documentation protesting in front of the ICE prison, as well as at the County Building, demanding the Multnomah County Sheriff’s Office stop working with ICE. 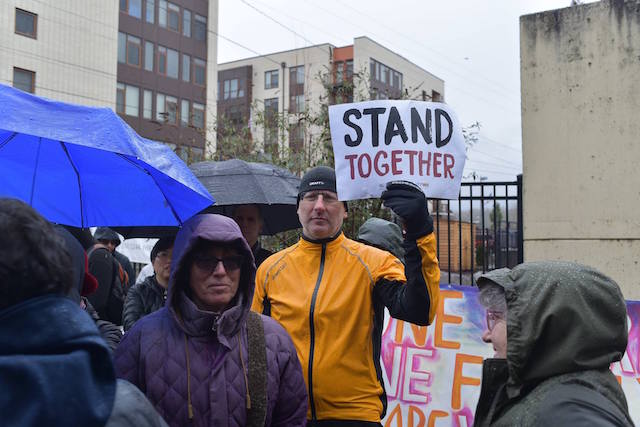 “For so many years,” said Jaime Guzman of the Momentum Alliance, which organized the event, “there’s been such an attack on our communities–our undocumented community, or immigrant community, our refugee community. For the last couple of years we’ve been attacked, but also we want to show ICE that we’re not gonna be afraid of them. That as a community we’re gonna continue to fight back.”

There are many ways of fighting back. One of them is by reclaiming humanity. The raids under the Bush and Obama Administrations underscored the essential dehumanization that is at the heart of US immigration policy, and Trump’s anti-immigrant rhetoric that was a pillar of his campaign and actions have exacerbated that fundamental barbarism. The people without documentation speaking at Monday’s rally rejected these brutal fantasies and demanded they be recognized as people whose dignity and rights to life, liberty, and the pursuit of happiness will not be denied.

“I am an alien to those who believe I should not exist in their so-called ‘land,’” Petrona Dominguez told the crowd. I am unwanted to a society who thinks it’s okay to hurt, to break, and to crush people like me. I am human, just like you.”

Sooly Vazquez said, “I am a human being, yet people don’t see it that way when they know I lack a social security number. They dehumanize me, they refer to me as illegal, alien, criminal.”

If there is a lack humanity in the US, it is in people and policies that craft the conditions that compel people to leave their homes and then persecute them for that choice. Indeed, most of the enforcement of US immigration policy ignores the effects of so-called free trade agreements such as NAFTA and CAFTA which allow for the free flow of capital but not labor, making it impossible for many people to provide for their families or pass on the possibility of a better life to their children. It ignores the predictable instability created by such economic arrangements and a foreign policy designed to uphold economic interests, often at the expense of human rights. It is a formative story of nearly all immigrants.

Carmen Guernica, who has “lived in this area for 13 years” and is a grandmother to two US citizens, said, “Like many others, I left behind a place that offered no promises or work, which only offered insecurity and poverty. As a woman seeking the safety and the future of my daughter, I came here. I wanted to give my child the best of education and the opportunity I didn’t have.”

“I am from a family,” Dominguez said. “A family of immigrants who risked their lives and worked extremely hard to survive. Who left everything they knew in hope of a better life, in hope of a dream–a simple dream in which their daughter and her siblings would have the opportunity to succeed.”

Contrary to propaganda long fostered by ICE, and put into overdrive by Donald Trump when he kicked off his Republican campaign for president by declaring all Mexican’s rapists, the vast majority of immigrants are not committing rape and murder, they are not terrorists, and they are not part of drug cartels. They often are doing their best not to be noticed by law enforcement, much less commit crimes that would quickly result in their arrest and deportation.

Staying under the radar has never been easy. Jhoana Monroy learned early on that “we were living in secret; we were living in fear.” That lesson hit home when “years ago, my father woke up and went to work without knowing that he would never see us again. He was approached by ICE at work and taken away. His only crime was wanting to provide for his family.” A few years later, Monroy’s older brother was detained for driving without a license, leaving him “unable to see his family even though he had a child who wondered where daddy was.”

Deporting people like Monroy does nothing for national security. But it certainly creates even more insecurity and instability in immigrant families and communities. Monroy described what it was like when her father was taken away. “I remember the sobs of my mom, my brother, and I. The room had a sensation of darkness, gloom, and sadness as she tried to nurture us back to life with her touch. None of that worked because we all knew a big piece of our hearts had been ripped from us.” 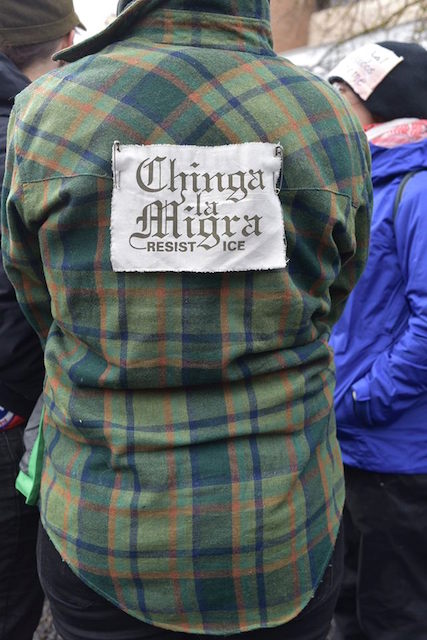 “What brings us here today in front of the immigration office is not just our story,” said Luna Flores. “It is the story of thousands of families being separated. It is the horror of seeing the lives of children destroyed and marked forever when their parents do not return to pick them up from school because ICE took them, and it will take a long time for them to understand why their mom no longer comforts them before bed.”

Over the past few years, actions that called attention to ICE have often proved effective, sometimes resulting in the release of detainees. It remains to be seen if under the Trump Administration ICE remains sensitive to the public awareness, but Guzman expressed confidence that it would. After the crowd was asked to face the ICE prison and shout, “Undocumented, unafraid!” a couple of the officers in the building who had been watching through windows moved out of sight.

That community includes people with documentation who pledged to stand up with those without it. They too had a message for Trump and ICE. Facing the jail, they repeatedly shouted, “We have their backs!”

Courage comes in many forms, most of them far more subtle and less recognized than those one might see in a Hollywood blockbuster. Sometimes the simple act of standing in the face of your oppressor and fearlessly sharing your life story is as bold an act as anyone can make. For those people without documentation who are once again unabashedly coming out of the shadows, that fortitude may well prove contagious, and it will doubtlessly help keep families and communities more intact. Faced with injustice, they are staring back, unflinchingly.

“We belong here just like everybody else,” said Dominguez, “and regardless, we will always fight back.”

For more information on how you can get involved in organizing and fighting for immigrant justice, visit the Momentum Alliance’s webpage at: https://www.momentumalliance.org.

There are numerous other groups also organizing and fighting for immigrant justice.  Many of them are part of the Portland Immigrant Rights Coalition whose Facebook page is at: https://www.facebook.com/pdximmigrantrights/?ref=page_internal.