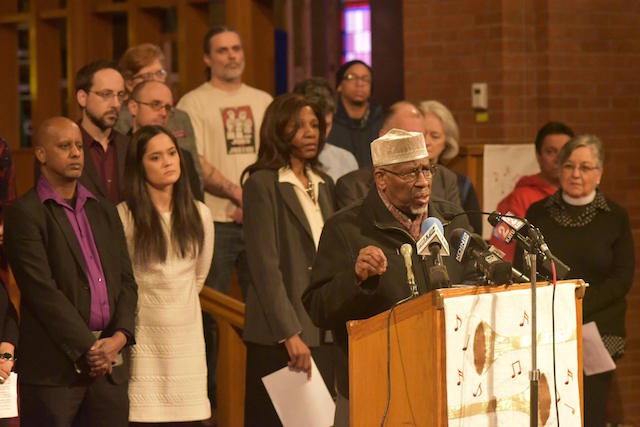 Imam Mohammed Najieb of the Muslim Community Center of Portland

After Immigration and Customs Enforcement (ICE) tried to take him into custody in 2014, Francisco Aguirre made a desperate phone call. Thirty minutes later a car arrived at his home, and soon Aguirre found himself taking sanctuary in Augustana Lutheran Church in Northeast Portland. He would remain there for 81 days, and wherever he went–to deal with immigration bureaucracy or to court, for example–he was accompanied by a large group of supporters. Aguirre became a prominent face of the New Sanctuary Movement which was formed in the wake of the wholesale immigration raids of the George W. Bush Administration and grew as President Obama’s Administration saw an even greater increase of people without documentation being torn from their families and communities, detained, and deported. The purpose of the movement is to provide a haven for immigrants, making sure they and their families were protected and kept whole.

Prior to the recent presidential election, about 400 faith communities throughout the US had declared themselves sanctuaries for people without documentation being pursued and persecuted by ICE. Since Donald Trump came to power, that number has doubled. In less than five weeks, Trump and his Republican Administration have tried to ban people from seven Muslim countries from entering the US and have promised to amp up the war on immigrants, perhaps to fulfill Trump’s campaign promise to deport the estimated 12 million people without documentation who live in the US. Over the past two weeks, more than 600 people have been detained by ICE. The horrifying and disgusting racist rhetoric of Trump’s campaign is now becoming policy.

On Friday February 24, representatives from over 15 faith congregations and justice organizations held a press conference at Augustana Lutheran Church to make known their intention to protect and stand with immigrants facing deportations. Attended by 100 defenders of immigrants and immigrant rights, it was as much a statement of support of bedrock religious principles as it was a unified voice against the bigotry, racism, and xenophobia at the heart of Trump’s policies. It was a clarion call to resistance. 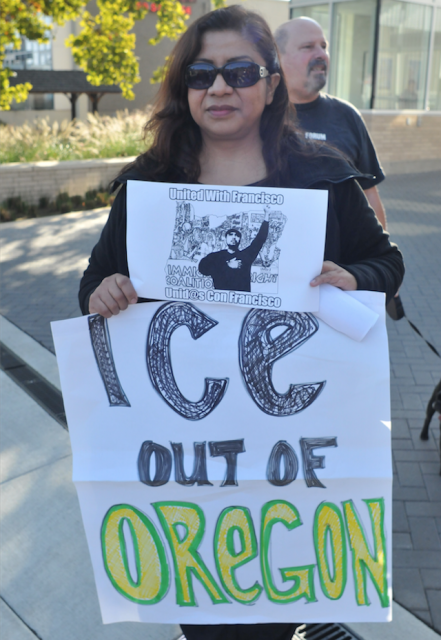 Aguirre knows all too well what it means to live in fear. Beyond the 81 days he spent in Augustana Lutheran, he had been pursued by the Department of Justice for nearly 21 months as it sought to prosecute him on an illegal re-entry charge. Aguirre arrived in the US from El Salvador in 1995, fleeing violence that was largely a consequence of US foreign and economic policies, particularly the Dirty Wars of the 1980s in which the US supported brutal regimes and paramilitaries in Guatemala and Nicaragua, as well as in Aguirre’s El Salvador. Later policies resulted in destabilized legitimate governments, and where these governments have no power, they have been replaced by the rule of drug cartels and others using unaccountable violence to achieve their ends. As Aguirre noted at Friday’s press conference, if he were returned to El Salvador, he would be as good as dead.

This is no exaggeration. Aguirre’s son Moises too was in the US without documentation. Between the stress of seeing his father’s struggle as well as worrying about going to prison for his own illegal re-entry, Moises returned to El Salvador. He was murdered there on February 2, 2016.

Undocumented immigrants fear being deported. They fear their families being torn apart. If, for example, a mother is deported, who can replace her? What will happen to her children? Such fears lead to people taking drastic steps to keep from being apprehended by ICE.

Olga Gerberg works with Familias en Accion and serves on the Sandy City Council. She has seen how families are responding to the threat of arrest and deportation. “They are not able to go to the food bank,” said Gerberg, “and they are not able to eat because they are afraid of going out, and they do not want to take the risk of being separated or deported from their loved ones. Many are afraid to go to a doctor’s appointment or to go on a walk with their children at the park.”

Andrea Williams of Causa pointed to how dire circumstances have become for immigrants. “The memos issued by the Department of Homeland Security earlier this week,” she said, “make virtually every undocumented immigrant a priority for deportation. It doesn’t matter if you’ve been in this country for decades, if you have children who are US citizens, or if you’ve been an outstanding community member. The memo sends a clear message that ICE has the power to target anyone, and that they’re working to get the resources to do just that. It is truly a terrifying moment for so many immigrant families.”

That trepidation is well-grounded. On February 2, Oregon governor Kate Brown signed an executive order making Oregon a sanctuary state. The extent of that sanctuary, however, depends upon a willingness of those with power to live up to it. Last week, the Portland Tribune recently uncovered evidence showing sheriff’s deputies in the Multnomah County Sheriff’s Office sharing information with ICE to help deport people without documentation even as local law enforcement agencies in Oregon are banned from helping ICE deport people who have not been convicted of a crime.

“I’m calling all Oregon law enforcement agencies to abide by Oregon laws, to follow their leadership’s directions, to insure that there be safety for all,” said Kayse Jama of Unite Oregon.

Imam Mohammad Najieb of the Muslim Community Center of Portland noted that the uneasiness and fear of immigrants and immigrant communities was part of a larger feeling of insecurity throughout the country. Najieb said that he embraced Islam “some forty-odd years ago, which I believe is my right. And there are certain rights that we are guaranteed, and this is something that I believe is very important because if we don’t look at the fact that there are rights that are guaranteed to all of us, then if we disregard that, then the rights of any one of us can be refused or violated.” 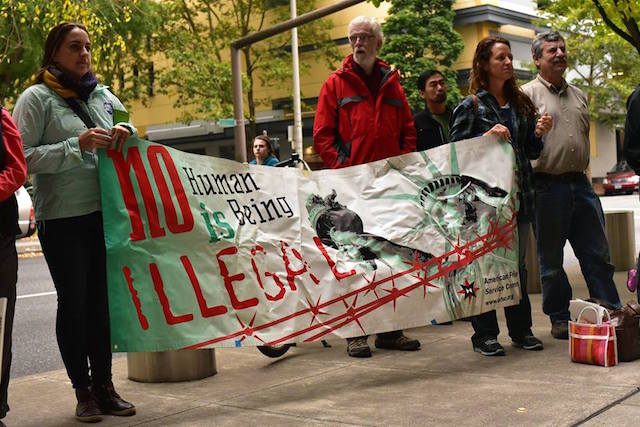 Najieb urged people to organize and “engage ourselves so that we put in power those kinds of Americans who believe in America for all Americans and not just a few particular Americans.”

“I think it is an obligation,” he continued, “upon all of us as Americans to stand for the principles America was founded upon–that’s freedom, justice, and equality for all.”

Jo Ann Hardesty, president of the Portland NAACP, pushed further Najieb’s call to engagement. “I want you to know we cannot depend on elected leaders to save us. We cannot depend on the courts to save us. The only people you can absolutely be sure will be on the front line will be your neighbors, your faith congregation, your community partners. This is not the time to be a silent supporter. This is not the time to be sitting back in the comfort of your home saying, ‘I’m with those people on the street.’ This is the time for you, Oregonians, to be loud, to be visible, to be on the street, to be in your elected leaders’ offices, to be demanding equality for everyone.”

The New Sanctuary Movement derives from the Sanctuary Movement of the 1980s which provided respite for people fleeing the brutality of Central America’s US supported Dirty Wars. Those escaping that violence found it difficult to attain asylum in the United States, and thus over 500 religious congregations in the country committed themselves to providing shelter and other necessities such as food and clothing, as well as legal advice, to refugees from Central America. It saved many lives. According to Knutson, to date 16 congregations in 9 major US cities have offered sanctuary to people without documentation being persecuted by ICE.

Rae Anne LaFrenz of the Interfaith Movement for Immigrant Justice explains, “All of our members, all of our supporters, and all of their families are here right now to say, ‘We will provide radical resistance to everything we’re hearing right now, and our faith traditions tell us that we will provide actual, physical sanctuary. We will also provide other forms of accompaniment. That’s what we do. We show up. We are here because we’re in prevention and protection mode now, folks. It’s a whole different ballgame now.” 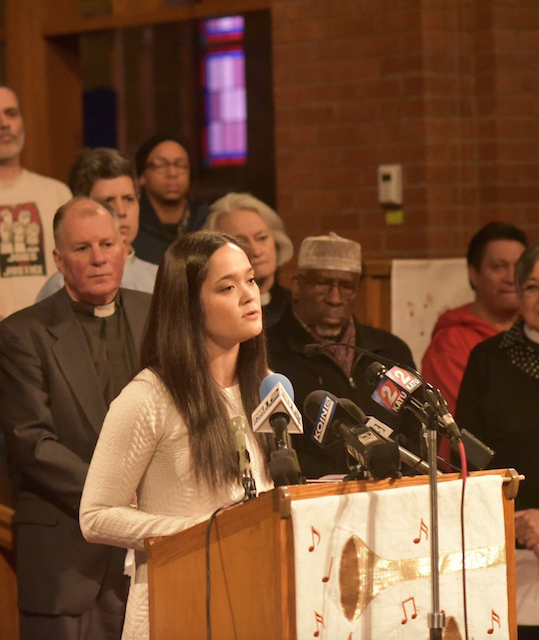 LaFrenz may be right that it now is a “whole different ballgame,” but it is also a moment that bears similarity to other times when people of faith and conscience have stood up for justice. Shari Raider of Havurah Shalom connected that timeless call for justice to the ancient texts and history that guide her and her congregation today. “We know these executive orders to be unjust,” she stated. “And as Jews, we understand them to be in conflict with our values, both from the perspective of Torah which teaches us to welcome the stranger, and personal facts that many of our own family histories include stories of immigration. We are here to listen, learn, and yes, to act. To be part of a sanctuary movement in Oregon is to stand in solidarity with our immigrant brothers and sisters, and with all communities feeling under threat by this administration. We know what it means when borders are closed, when fingers are pointed, and we say never again.”

People do not simply leave their homes and communities on whim. They must be compelled. Free trade agreements such as NAFTA forced many Mexicans to leave their homes because they no longer could provide for their families. Refugees have often come to the US fleeing the murderous results of our foreign policy. As Linda Jaramillo of the Ecumenical Ministries of Oregon said, “As a nation we first must confess that human migration is a global crisis to which we have contributed. And we must confess that US immigration policies are based on racism and xenophobia.”

Which leads to the age old question: which side are you on? Reverend Doctor LeRoy Haynes of the Albina Ministerial Alliance, who has fought for a more just world for over half a century, made clear just what the sides are.

And with the same steely resolve, they also make plans for a more just world because they know that is what must follow.

“I know this struggle is real,” said Kayse Jama, Executive Director of Unite Oregon. “I know other families of people will be suffering for the next years. But one thing I will assure you: we will be victorious. What we need to do now and think about is, when the dust settles, what kind of society–what kind of community do we want to build? We have to put that seed in the ground right now. The decision on how we want to build our country and the direction we want to take our country is not up to Donald Trump and Donald Trump’s administration. It’s up to us as a community, as Oregonians, as Americans.”