“We will always see ourselves as a sanctuary city and we will continue to be welcome to everyone,” said Ted Wheeler after he was elected mayor. His words were given official imprimatur in late March when the City Council declared Portland a sanctuary city. It was a symbolic gesture, if only because state law already prohibits cities from helping to enforce federal immigration laws. Regarding the declaration, Wheeler stated, “The City of Portland will remain a welcoming, safe place for all people.”

Words are easy. Actions are another story. Like most politicians, Wheeler is a person of words. And when it comes to Portland’s sanctuary city status, that is all he is.

The Immigration and Customs Enforcement Agency (ICE) has been snatching people off the streets and from their homes throughout the country. This is nothing germane to the Republican Trump Administration: Democratic president Barack Obama oversaw the deportation of more than 3 million people without documentation.

Under Trump, the deportations certainly have a much more obvious racist overtone. After all, he began his campaign by labeling all Mexicans rapists, later backing that one up to say that some of them were probably okay. His attitude has seeped through and provided nutrients to white supremacists whose values have formed the backbone of the United States since the ink dried on the Declaration of Independence. It is always just a scratch below the surface, but Trump has provided the sunlight, water, and fertilizer for it to once again bloom brightly. Most politicians prefer to use dog whistles and soft pedals. Not surprisingly, Trump–with all due respect to Dave Edmunds–is as subtle as a flying mallet. ICE is just one of this country’s institutions that is used to enforce white supremacy, in particular, against immigrants without documentation. Those immigrants are understood not to be white.

Wheeler’s response to all this has been a lot of bromide, which makes complete sense as a political calculation for someone who putatively has eyes on the governorship of this state. Wheeler is doubtlessly charting the path he thinks can lead him to Mahonia Hall, which means placating the largely Democratic voters of Portland and other pockets of liberalism such as Eugene, while not running too far afoul of the outlying areas that lean more conservative.

At some point people need to realize that politicians do not care about people. They care about power. That leaves creating real sanctuary up to The People. During the afternoon of Wednesday October 11, outside the ICE prison on SW Macadam, a group of over 50 protesters with the group End Deportations Now didn’t just speak about sanctuary, they took action to demand their city actually provide it.

Romeo Sosa of the VOZ Workers’ Rights Education Project spoke about the almighty chasm between Wheeler and Council’s words and actions. “Supposedly Portland is a sanctuary city. Where is the sanctuary here? Inside, there are a lot of people who are Oregonians. They’re fathers, mothers, sons who are in jail right now, who are separated from their families. And we don’t want to allow that, that ICE separates their families here.”

“Sanctuary is much more than a vote,” said Reverend Mark Knutson of Augustana Lutheran Church, a sanctuary church for 22 years. “You have to have intentional action behind it. So Portland, to the City leaders, we commend you for saying we’re a sanctuary city, but it’s more than non-compliance. In order to be a sanctuary, it means the safety of all your citizens, whether we have documentation or not because in God’s eyes documentation means nothing.”

Like many past actions outside the ICE prison, there were the requisite banners and chants. One moment people were shouting their support for people without documentation–not just those who had been taken in and imprisoned, readied for deportation, but for all of the estimated 11 million immigrants who have made their way to this country as a direct result of US foreign and economic policies that compel them to leave their homes so they can provide food, shelter, and safety for themselves and their families.

The next moment, five of them, emblazoned with the words “stop the deportations,” were bound together by their arms, with duct tape and some indeterminate material underneath, in a human chain strung across the driveway of the ICE prison. Behind them, slightly obscured by the prison gates, was a bus bound for a Tacoma prison for immigrants without documentation, known officially and euphemistically as the Northwest Detention Center, a private, for-profit prison run by The GEO Group on behalf of ICE.

A half hour later, at about 2:30, three Department of Homeland Security (DHS) police showed up. They were soon followed by some Portland Police, and by 3:30 at least 10 police officers, both local and federal, were on site. Liaisons from the protesters were talking with police. One of the Portland police, Officer McConnell, was negotiating with the liaisons, trying to figure out how they could arrive at a solution that would, by his standards, be classified as “win-win.”

That phrase, win-win, to be sure is a common one. But in the context of this rally, it also portrayed a huge systemic problem. The idea, by McConnell’s standard, would be to come to a solution that would let the police remove the people composing the human chain without having to arrest them, or at least avoid creating a bigger scene, as quite a few media crews were on hand covering the event.

Apparently, McConnell’s plan hadn’t factored in the people snatched by ICE and placed in the prison, some of them on their way to the jail in Tacoma. It did not seem to occur to him that for the protesters, the idea of winning would at the least–for this moment–require the GEO prison bus to stay put. Absolutely missing was the overarching point of the action, which according to Peter Parks, one of the links of the human chain, was to “get ICE the hell out of Portland and make it a true sanctuary city.”

The Portland Police were clearly working with the DHS. They were not violating state law because they were not helping enforce immigration law, but in helping DHS, they were certainly helping ICE’s mission, which is the exact opposite of providing sanctuary. Wheeler heads the police bureau, and he apparently has no problem with the Portland Police aiding ICE’s mandate to uphold white supremacy. That would require action–courageous action–on his part.

When it eventually became clear that the folks in the human chain had no intention of moving until the GEO prison bus released its prisoners, the police moved in. To cut through the material binding the five links of the human chain together–material they assumed was metal chain or pipe–the police said they were going to use some sort of power saw, and thus it was necessary to protect the members of the human chain. They placed hoods over their heads, and headphones over their ears. In the end, there were no chains or pipes, so something more like garden pruners was used to unlink the human chain. Still, the visual was horrific, a gross tableau of sensory deprivation. 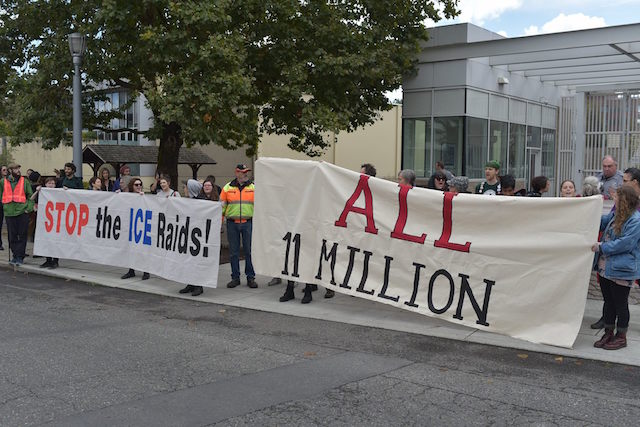 That bizarre sight, however, was tiny in comparison to what the estimated 11 million people without documentation in this country go through every day.  And more importantly, despite much of the focus of the media, the point of the action was not the plight of the protesters. It was those 11 million people who are daily under attack. On Thursday, Parks posted a comment on Facebook reading, “I have to say that none of this was about us (the protesters). It was about the people in the bus who were invisible. Even the bus was invisible to much of the media because it never came through the gate, but was there. Second, the hood and earmuffs were not at all a concern to me. I realize now the visual effect that had on observers and people who see us in pictures, but for me it was not scary at all. I was told step-by-step by the police what they were doing. They were protecting my head and hearing from the sawing of whatever was under the duct tape (chains, wire, who knows what…). So, yes, weird stuff by the police, but not as terrifying as what is done to Black people being arrested for similar actions. We have our own analysis of police (I am abolitionist), but feel this is not the action to put front and center. Our action called very plainly for ending deportations. It was about the people on that bus and all the people being detained and deported.”

Those 11 million people are our friends, neighbors, and community members. They sit beside us in houses of worship. Their children attend our children’s schools. They work beside us. They have similar dreams and aspirations.

Many of them are frightened that they will end up on that GEO bus, perhaps never again to see their families, friends, co-workers, fellow worshippers, and all other manner of community members with whom they have woven their lives.

Those of us who are privileged enough not to have such worries–including those who operate in a world based on political calculations–have a moral obligation to stand in solidarity with ICE’s potential victims and do what we can to stop ICE from shredding that fabric. It’s not about words. It’s about action.

“We can’t afford to sit around as our communities continue to be terrorized,” said labor organizer Amina Rahman, one of the members of the human chain, and a first generation Bengali American. “ICE is a white supremacist institution that enforces who can be in these lands, and they have no authority to do so. This is stolen, colonized land. A lot of folks that ICE terrorizes are actually indigenous to these lands. They have no authority to do so. Deportation is inhumane, which is why we’re here for all 11 million people. Migration is a right and we’re not gonna sit by as our communities are deported, as families are ripped apart.”