Photo by Portland Committee for Human Rights in the Philippines

Over 100 human rights activists and leaders from dozens of cities across the US came together at Saint Luke’s Episcopal Church in Vancouver, Washington, on December 9 to launch a national campaign against President Rodrigo Duterte’s “fascist dictatorship in the Philippines” and form the US chapter of the International Coalition for Human Rights in the Philippines (ICHRP-US). The group has vowed to “defend human rights and end all forms of US military aid and support for fascism in the Philippines” and to strengthen their efforts to “stop the killings and end all forms of fascist attacks against the Filipino people.”

Since taking office in June, 2016, Duterte has promulgated a war on drugs. Given the broad scope of the drug war and the longtime impunity for Philippine police and military, an exact number of killings is difficult to determine. However, according to Philippine Human Rights Organizations, in its first year, Duterte’s drug war resulted in the deaths of at least 13,000 suspected drug users and dealers. Despite the mass scale of the killings, Human Rights Watch found that “government claims that the deaths of suspected drug users and dealers were lawful were blatant falsehoods,” noting that “interviews with witnesses and victims’ relatives and analysis of police records expose a pattern of unlawful police conduct designed to paint a veneer of legality over extrajudicial executions that may amount to crimes against humanity.”

The killings under Duterte arise in the context of a civil war in the Philippines. Since 1969, the revolutionary alliance of the Communist Party of the Philippines, the New People’s Army, and the National Democratic Front of the Philippines (CPP-NPA-NDF) have taken up arms with demands of land reform, redistribution of wealth, and national sovereignty. Like many of his predecessors, Duterte has taken to tagging activists opposing his policies as members of the CPP-NPA-NDF alliance, using the civil war as an excuse to kill anyone with any progressive demands. 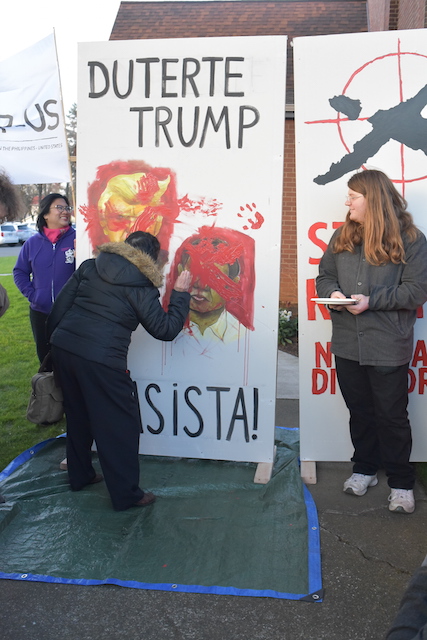 In November, Duterte cancelled peace talks with the CPP-NPA-NDF, quashing negotiations for social and economic reforms that would address the roots of the armed conflict. Duterte has used the civil war to further advance the interests of Philippine and foreign elite, giving full support to the Philippine military to bomb civilian areas, and even branding progressive groups as terrorists in support of the revolutionary movement’s armed wing, the New People’s Army.

For over a century, the Philippines have played an important role in US foreign policy. From its first moves toward colonization of the land and its people in the late 1800s to President Barack Obama’s “Pacific pivot,” the US has used the Philippines as a military stronghold. More recently, the US has seen it as an important part of its attempt to hold on to regional economic hegemony in the face of a surging China which has its own interests in the region. In particular, in April of 2014, Obama and Philippine President Benigno Aquino III, signed a ten year Enhanced Defense Cooperation Agreement which allowed the US to increase its military presence in the Philippines.

There was something of a shift in June, 2016 when Duterte succeeded Aquino, with Duterte making his own pivot, placing greater emphasis, at least rhetorically, on pursuing an independent foreign policy. But in November, Duterte met with Donald Trump, who had already expressed support for Duterte’s spurious drug war. According to a leaked transcript obtained by the Washington Post, in a phone call on April 29, Trump told Duterte, “I just wanted to congratulate you because I am hearing of the unbelievable job on the drug problem. Many countries have the problem, we have the problem, but what a great job you are doing, and I just wanted to call and tell you that.”

Following his meeting with Duterte, Trump, who has often boasted about his determination to tear down President Barack Obama’s legacy, seemed to align himself with Obama in his view of the Philippines’ role in US foreign policy when he stated, “It is a strategic location, the most strategic location. And, if you look at it, it’s called the most prime piece of real estate from a military standpoint.”

Trump’s comments are reflected in Senate Bill 1055, titled the Philippines Human Rights Accountability and Counternarcotics Act of 2017. While the bill prohibits the export of “defense articles or services, or issuing licenses for export of any item controlled by the United States for law enforcement, riot control, or related purposes, for use by the Philippine National Police or associated entities,” it makes exceptions for “the exportation of defense articles or the provision of training for maritime law enforcement, criminal justice programs, human rights training, or counter-terrorism programs for such police.” Furthermore, the bill allows the president, after giving notice to Congress, to waive the bill’s restrictions if it is “in the US national interest.”

Problematic as the bill is, ICHRP considers it a step in the right direction and will continue its advocacy in relation to Senate Bill 1055, pushing the US to end its funding of the drug war in the Philippines.

Oregon Senator Jeff Merkley, a sponsor of Senate Bill 1055, expressed support for the people of the Philippines against Duterte’s violence. In a personal statement read by one of his staff members at St. Luke’s, Merkley stated, “Know that your voices are not in isolation: I have joined Senate colleagues in demanding that President Duterte stop his campaign of murder…As a member of the Senate Foreign Relations Committee, I will continue to push for demonstrated improvements in President Duterte’s human rights record and an end to extrajudicial killings.” 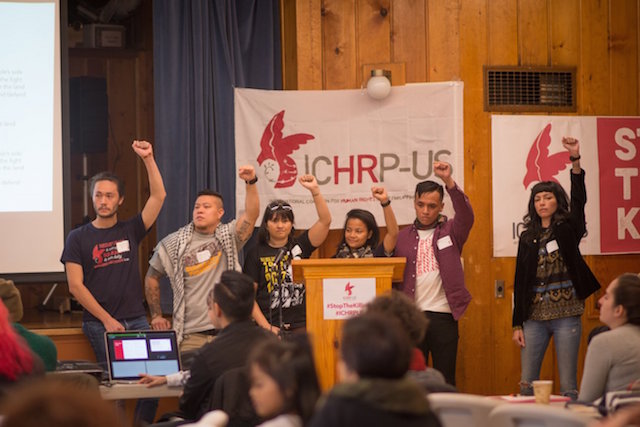 Photo by Portland Committee for Human Rights in the Philippines

However, the group believes the bill does not address the root problems of the Philippines. Given the context of the civil war of the Philippines, ICHRP organizers are against all forms of US military aid to the Philippines, especially that which is funding the Armed Forces of the Philippines in the ongoing civil war. Rhondelei Gabuat, Deputy Coordinator for the Pacific Northwest Chapter of ICHPRP, stated, “While we commend the bill’s call to end the drug war, we further call for a policy of de-escalation of military aid and training as this perpetuates human rights violations through militarization and war. We believe a human-centered, demilitarized approach to a lasting peace answers the aspirations of Filipinos and US citizens tired of endless wars.”

Portland may not have the highest concentration of Filipinos among large US cities, but that hasn’t quieted the voices of Portland Area Filipinos, who have garnered a broad solidarity network in the Pacific Northwest Chapter of the ICHRP, the largest chapter in the country. Tighearnan Lee, Solidarity Officer of Portland Committee for Human Rights in the Philippines was recently on a international solidarity mission to Marawi, a Muslim majority city in Southern Philippines. Marawi has been a war zone since reported ISIS activity in the area, which Duterte has also used to further militarize the whole region under a declaration of martial law.

“During our mission, we heard the cries of indigenous people, women and children, that the war against the people must be stopped,” said Lee. “As people in the US who recently protested Trump’s visit with Duterte in November, we see how the struggle between the Filipino people and people in the US is bound. As fascism heightens, we must link with the Filipino people so we can wage our campaign for peace and justice together.”

Since the initial imposition of military rule across Mindanao in May, 400,000 people have been forcibly evacuated from their homes. Martial law was limited by the constitution to 60 days, but a five-month extension was issued in July, 2017, followed by an additional one-year extension just granted in mid-December. Duterte’s martial law has drawn widespread criticism from non-governmental organizations and advocates citing cases of the enforced disappearance, torture, harassment, and murder of civilians active in human rights advocacy.

Nikki, Chairperson of Portland Committee for Human Rights in the Philippines, gave witness to the current conditions of the people in the midst of the war during her recent solidarity mission in Marawi. “Upon my return to Portland,” she said, “every time I hear Christmas bells, I can only think of the jingle of bullet shells at my feet whenever I would visit the destroyed homes of Marawi citizens. Whenever I am stuck in traffic, I can only think of the 25 times we had to stop due to military stops under Duterte’s martial law.”

The circumstances Nikki described, and the persistence of Filipinos in Portland like her who speak out, has garnered the support of church people and human rights advocates, propelling the rapidly expanding solidarity movement in Portland.

The newly formed ICHRP-US concluded its debut with a rally that included supporters applying red paint–some by hand, others by brush–to a mural of Trump and Duterte. The paint signified the spilled blood of the many thousands of Filipinos murdered with the support of US tax dollars.

Multiple public markers in Portland depict the historically colonial and unequal relationship between the US and the Philippines. Northwest Luzon Street is named after the northern area of the Philippines from where Portland’s Lewis and Clark Exposition of 1905 displayed indigenous Filipinos in a racist show of US power while the US continued its colonial expansion after the Philippine-American war. Downtown Portland also hosts a statue of Theodore Roosevelt, under whose presidency, after numerous atrocities committed by the invading US military, the war came to a diplomatic end.

In a city like Portland where the Filipino story is often whitewashed, but where the voices of the Filipino people are strong, the call of the ICHRP-US was clearest in one of the banners flying in the conference hall at St. Luke’s. It read, “Resistance is our right. Solidarity is our duty.”

Drew Elizarde-Miller is Regional Coordinator for the Pacific Northwest Chapter of ICHRP. He says, “Since Duterte took office in 2016, his so-called war on drugs has in reality been a war on the poor, continuing widespread displacement, and seeking to squash resistance. Every time US tax dollars go to the training of Philippine police and military, our dollars go to the perpetuation of the war on the poor. As ICHRP members across the US, we will continue to raise our concerns in the streets and in the offices of our legislators until there is justice.”

Want to get involved in the fight for human rights in the Philippines? Check out the ICHRP’s Facebook page at: https://www.facebook.com/ICHRPhilippines/