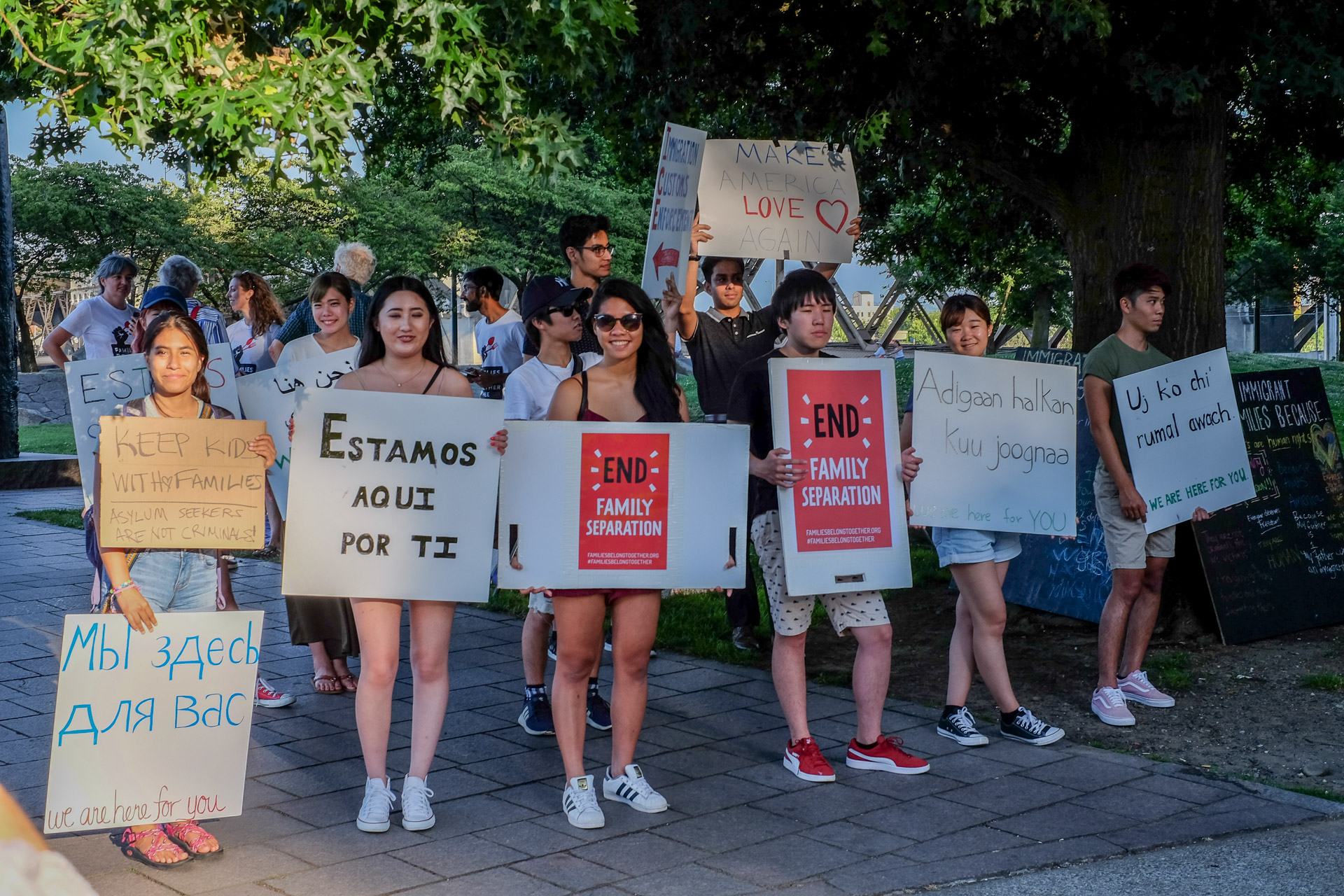 This Summer, Portland kicked off a nationwide series of protests against Republican Donald Trump’s orders that tore apart families at the Mexico-US border. Responding to the horrific sight of children being separated from their relatives and incarcerated, large numbers of people around the country followed Portland’s lead in occupying Immigration and Customs Enforcement Agency (ICE) offices and prisons, demanding the abolition of the agency that for well over a decade spanning Republican and Democratic Administrations has terrorized immigrant families and communities.

Family separation is not new history. African slaves and their children, considered nothing more than commodities, were sold at auction to the highest bidder. The US government took away the children of the indigenous population. When Japanese people and US citizens of Japanese descent were forcibly incarcerated during World War II, they too saw their families torn apart. Echoes of these separations remain today in the various child protective services that do little to deal with the problems that create the terrible conditions children and their families often endure. It is woven into our national fabric.

During the Obama administration, the response to refugee mothers and children from Central America was to place them in isolated prisons, attempting to fast-track their deportations. Immigrant rights attorneys, such as those at Portland’s Immigrant Law Group, were part of a team that did noble work in visiting these jails and making sure that at least some of the imprisoned were given their legally required due process.

With Trump’s stepped up attacks, large numbers who never before have been engaged in activism have come out to protest these abuses. For these people, clearly Trump has crossed a line that many are not willing to ignore. At the same time, white supremacists have been emboldened by the racist rhetoric and policies of Trump and the Republican party which he leads. 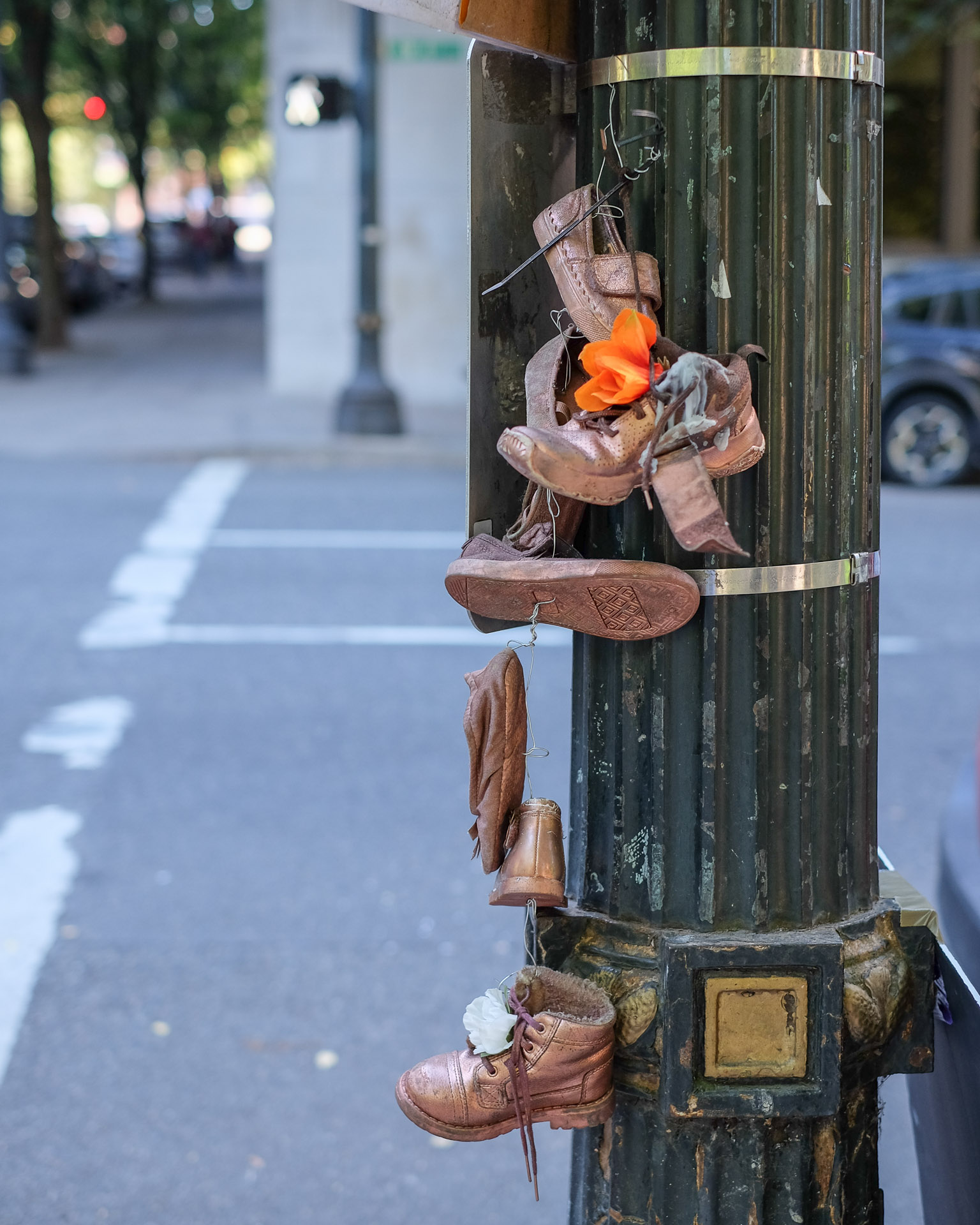 Now, White supremacist groups such as Oregonians for Immigration Reform (OFIR) have placed a ballot measure in the upcoming November election that would rescind Oregon’s status as a sanctuary state. Measure 105 would allow police forces statewide effectively to function as deputies for the Immigration and Customs Enforcement (ICE), authorizing them to enforce federal immigration laws.

In response, the immigrant justice community has been organizing to get out the vote to defeat the ballot measure. At a rally on Sunday September 16 hosted by Socialist Alternative Portland and Portland Jobs with Justice at Terry Schrunk Plaza, supporters of immigrant rights and immigrant justice urged Oregonians to defeat Measure 105.

“People of color will be threatened if Measure 105 passes, and this scares me,” said Ban Appetite, a member of Socialist Alternative whose grandparents and father both came to the United States without documentation. “Measure 105 will open the doors to further racial profiling here in your home state, Oregon. This is happening right here in a state where my family and I moved because we had the impression that Oregon was a state that accepted people like me, that accepted diversity–a progressive state. If Measure 105 passes, the poor treatment of immigrants and people of color will continue, including innocent children being locked up, innocent children being detained against their will, and being separated from their families.” 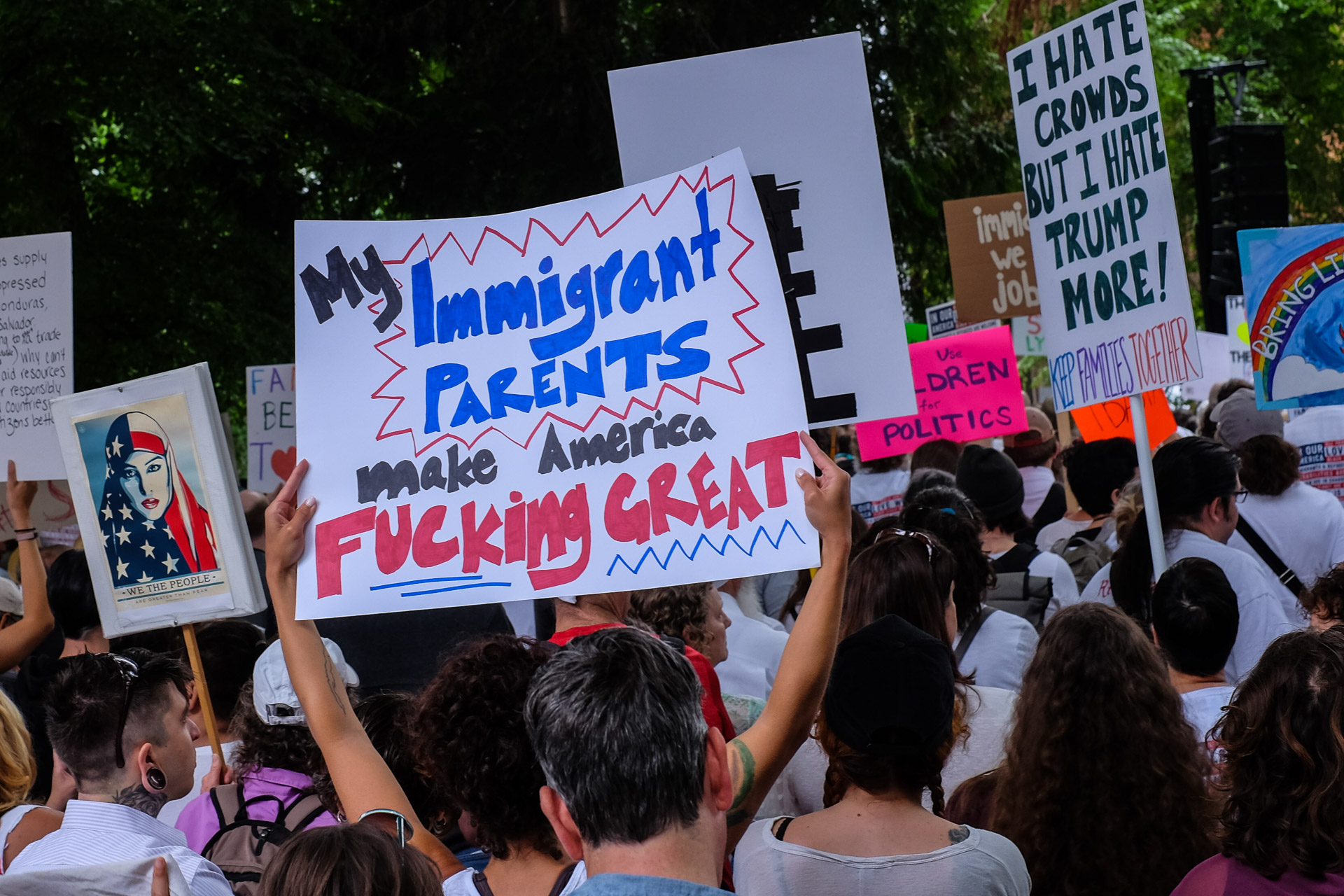 Appetite added that Measure 105 “is not only an attack on immigrants, but it is also an attack on people of color,” and would allow police to “racially profile individuals who are assumed to be immigrants by demanding documentation.”

Contrary to what anti-immigrant hate groups like OFIR might claim, immigration is hardly a clear cut legal issue. Some immigrants are refugees, fleeing violence in their homelands that in many instances is directly linked to US foreign and economic policy. Countries such as El Salvador and Guatemala, whose people were forced to endure the Dirty Wars of the 1980s and 1990s, were headed by murderous governments supported by the US. At the time, official propaganda was that the US was stopping the spread of communism, offering up false narratives such as Ronald Reagan’s ludicrous statement that communist forces were only a few days march from invading the US.

History, however, seems to reflect that US opposition came in response to the attempts of other nations to create governments that reflected the interests of their own people rather than those of US capitalism. The benefits US consumers often receive that depend on the US imposing capitalism upon those countries–cheap labor, cheap goods, and as well, cheap labor when people migrate to the US–is often ignored.

This was not the case at Sunday’s rally, as speakers highlighted the importance of bringing forth the reality of US imperialism and how its dreadful effects push people to leave their homes. “Crossing the border is not a crime. Fleeing danger that has been created by our imperialistic war mongering country is not a crime,” said  Olivia Pace, who emceed the rally. “We need to absolutely continually challenge the question of borders, challenge the question of whether there needs to be some kind of penalization for immigrants crossing the border. There doesn’t. We need to unequivocally always say that people fleeing their countries to be here need to be accepted and taken in without question…we need to fight the imperialistic violent policies that have caused them to have to flee their home in the first place.”

“Do we really live in a sanctuary state now?” Rosemary asked the crowd. “In a sanctuary state where undocumented people live in perpetual fear of being detained? When we have 100 of our community members locked away in a detention center just a little ways away from here? When immigrants can be hyper-exploited by their employers and denied basic services? Are vulnerable communities really safe when cops protect literal neo-Nazis and attack protesters?”

Anthony Bencivengo of Portland Tenants United made a clear connection between the plight and persecution of refugees and migrants and local issues such as the rent crisis. “The forces of colonialist capitalism which divide our world with nations and borders are the same forces that break up our communities by making housing a privately owned commodity to be sold to the highest bidder. The struggle for tenant rights and for the city to be affordable to everyone are inextricably connected to the struggle for rights for immigrants and refugees. For the tenant class to win victories collectively against landlords, we need to be able to work together across lines or race, gender, and nationality. And we can only do that if immigrants tenants are safe to organize without fear of retaliation or harassment.”

As an example, Bencivengo talked about the Holgate Manor Tenants Union which recently launched the largest rent strike in Oregon’s history. For over 40 years, Holgate Manor been a community of immigrants and refugees, but that community has been threatened since the apartment complex was sold to a California landlord, Fred Kleinbub. The Newsom family, who owned and administered Holgate Manor prior to Kleinbub and who, according to its tenants valued them as something more than simply an ATM, told the Holgate Manor community that Kleinbub had given his word to keep things as they were. This has proven false, with Kleinbub raising rents by 9.9%, a tenth of a percent below the threshold that would kick in the city law requiring him to pay for tenant moving expenses. Meanwhile, Kleinbub has engaged in what Bencivengo described as subjecting tenants to “over six months of noisy, dangerous, and purely cosmetic remodeling while refusing to address unsafe electric wiring and mold and vermin infestations.”

The fight for tenants’ rights is directly linked to immigrant rights. “This type of organizing,” Bencivengo stated, “is only possible when immigrants feel safe. When undocumented tenants are afraid to ask for repairs for fear that the landlord will report them to ICE. Or too nervous to challenge an unjust eviction in court because they’re worried that an agent could be waiting for them. Or they don’t feel that they can even go to a public protest because they’re worried that if they’re arrested by local police, they could be deported. If all of that is happening, it’s a lot harder to build these kinds of movements. That gives landlords more power over all of us, and it makes all of us less safe.”

Defeating Measure 105, it seems does not seem to go far enough for the organizers and the audience at the rally, who stressed that it is not enough to make Oregon a sanctuary state. It is not enough to get rid of ICE, only to replace it with another government agency that would replicate ICE’s mission under a different guise. The rally made clear that all resistance must be both national and local. Like the other speakers, Rosemary urged people to organize against Measure 105, and then organize immigrants as part of a larger project of organizing all working people.

“Capitalist politicians want to blame the failures of their broken system on some form of other, be it people of color, poor people, or undocumented people. They want to deflect and divide us, and say to the rest of the working class, ‘It’s those people’s fault your struggling. If we just oppress them more, you and your family will do better.’ But are we taking the bait? We know that all working class people have the same interest. The only us versus them in this system, when it comes winning health care, free college, good paying jobs, and an end to war is all of us, regular people–documented and undocumented alike–versus them, the ruling class that hordes the wealth and denies us our basic human needs. The only way we’re going to win is through solidarity and saying an injury to one is an injury to all.”

Pace also exhorted people to go further, to create a world without borders and the injustices that lie around them. The key, she said, was not viewing immigration as a legal issue, but both a moral and economic one based on the reality of the devastating effects of US foreign and economic policies.

“If we fight this battle on the basis of legality,” Pace said, “then we’ve already lost. Crossing the border is not a crime. Fleeing danger that has been created by our imperialistic war mongering country is not a crime. We need to absolutely continually challenge the question of borders, challenge the question of whether there needs to be some kind of penalization for immigrants crossing the border. There doesn’t. We need unequivocally always say that people fleeing their countries to be here need to be accepted and taken in without question. We need to challenge that liberal notion that we just need a better pathway to citizenship. No. We need to be taking in people who are fleeing danger, always. And we need to fight the imperialistic violent policies that have caused them to have to flee their home in the first place.”

The rally was followed by a short march around downtown. Sundays in downtown Portland are slow. The streets were nearly empty. It would have been an understandably desultory affair, 50 people marching through what could have been accurately described as a dead zone. But everyone was marching a keen jaunt with a bounce in their steps. The Unpresidented Brass Band, featuring a couple of saxophonists, two trumpeters, and some drummers and percussionists, gave a decidedly vibrant backbeat to the affair. Their spritely New Orleans sound, a combination of Preservation Hall and an incessantly infectious rhythm, turned downtown buildings into soundwalls, and made the cavernous surroundings feel downright homely.

It was an audible reminder that there is a moral component of this fight that asks people to welcome the stranger. That is particularly imperative when those strangers come to the proverbial and literal shores of the country that has pushed them to leave their homes. That is justice.