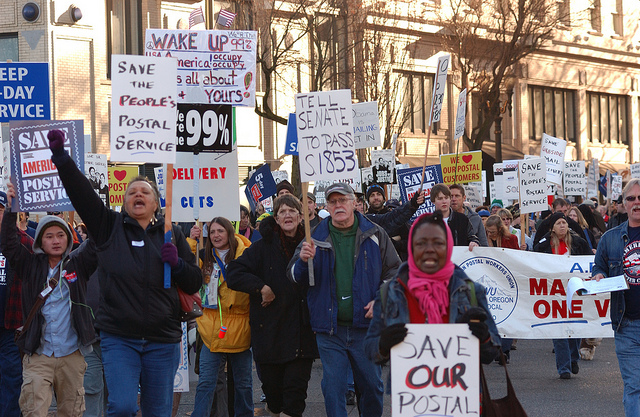 Former and current Portland-area postal workers turned out for a rally at Pioneer Square this past Sunday, January 8, to get the message out that there are some bad changes are coming to America in the form of House Res. 2309 & Senate Bill 1789.

Jamie Partridge, a retired postal worker at the rally pointed out, “We want to raise public awareness and build a movement to knock Congress off stupid, ‘cause it is stuck on stupid. […] The purpose of all this activity is to bust the unions and destroy well paying jobs. The Postal Service is the largest unionized industry in the U.S.” When asked what he saw as the Occupy movement doing for the postal worker’s unions, Partridge responded: “shaking things up and pointing the finger at the real problem in the U.S., and helping turn people out, bringing a fight-back spirit to this struggle to save the Postal Service.” He added that Occupy is “injecting a sense of hope and courage in the union movement”.

In Oregon, the only mail processing facilities to stay open would be Portland and Medford. Salem, Eugene, Bend, Pendleton would all be slated for closure, he added.

As Patty Olson, Director of Legislation for the Portland’s office of the American Postal Workers Union, points out, “it’s not just rural delivery – from processing, to window service, to driving, and delivery of first class mail, it all goes from a 1-2 day delivery to 3-4 days. The impact of this is people who get their medication through the mail, people who rely upon checks, this all gets impacted, and the burden will be felt most by low-income and the elderly.”

The rally, attended by 350 people, kicked-off at 1:50 with a group singing of “This Land is Your Land”. Jim Cook, President of NALC Local 82, took the stage and gave a rousing speech, closing with, “they call us snail mail, they haven’t seen nothing yet”. A series of speakers then took turns, Omar Gonzales of the American Postal Worker’s Union, Marco Mejia with Jobs with Justice, Jessica Campbell of the Rural Organizing Project and Chris Lopez, who represented 12 neighborhood associations.

Scott Murahashi, President and Assistant State Steward with the Oregon Rural Letter Carrier’s Association gave a rousing address demanding that Isa, “get the pre-funding off our back,” and “we are not paid for with taxpayer dollars, we can take care of our selves.” Pre-funding refers to the mandate that the USPS come up with 75 years worth of health care premiums over a 10 year period. 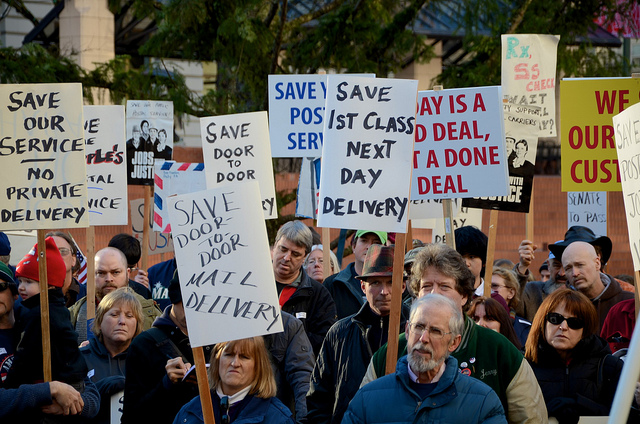 Most Occupiers are unused to marching down the sidewalk with a police escort. This march had a distinctly different feel as it left Pioneer Square; it was short, very civil, law abiding, with only one small fight between two dogs.

Talking up nearly two and a half blocks, the march slowly made its way down the Morrison St. sidewalk with Occupiers taking up the rear. At Morrison and Forth the march turned the corner and took to the streets with a chorus of Occupiers chanting “Whose streets? Our streets!” At the front of the march, the Union organizers chanted “Hey, hey, ho, ho, union busting’s got to go.” Once in the street, the march compressed its size down to only one block, making traffic congestion not much of an issue at all.

At Burnside the march turned West, finally out of the canyon of buildings along Fourth, and the sun broke from behind Big Pink, leaving everyone to feel the warmth on their faces as we headed toward Broadway. By time we neared Broadway another count was completed, estimating the crowd at 500. 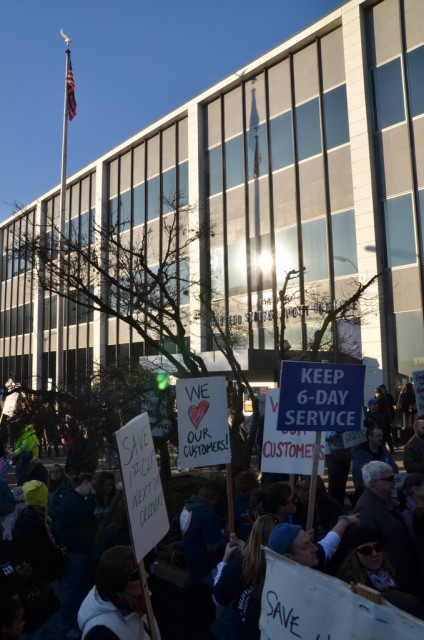 We entered the Post Office block at 2:55; Jamie Partridge began singing a union song accompanied by the three drummers doing backup. With the P.A. system already in place, a series of speakers took the mike. Ken Wilson, a letter carrier with the Oak Grove Station gave a rousing speech ending with a chant of “2309 No, 1789 No”. Patty Olson gave some moving words: “We the people own the Postal Service”. Jim Cook & Jamie Partridge brought the rally to an end with a member of the Faith Community ending it all on a prayer.