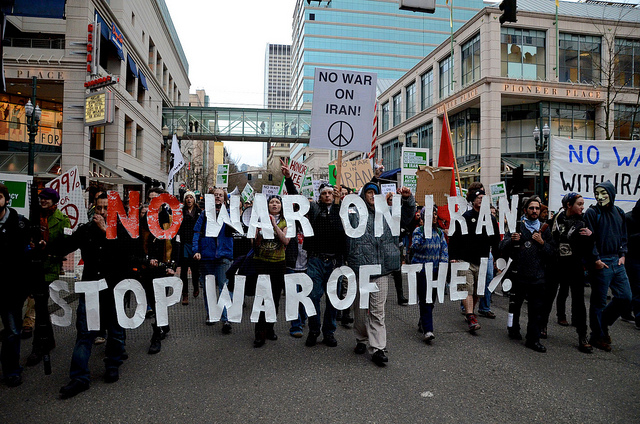 On February 12th, Occupy Portland and allies came together to protest the next war, before it even started.

The event was billed as “March and Rally to Stop the War of the 1%”. In recent months the rhetoric of aggression towards Iran by the United States has stepped up, with military exercises forming the fist-pounding bravado of a nation that wishes war, no matter the cost. In a disturbing similarity to the outright lies that have pushed public opinion to back wards in the past, rumors of nuclear machinations in Iran are put forward with little evidence. And even now, mysterious bombings of Iranian nuclear scientists take place within Iran without a declaration of war.

The organizers and attendees of the march today know better. They know that wars are perpetrated by the rich to serve the rich. They are meant to further the bickering interests of nation-states, and to cut social services so that those funds can be funneled to the military and industrial interests that profit from the expenditures of lives and resources.

This event provided a crucial opportunity for those who can see through the bellicose charade to meet each other face to face, and to rally. While the media at large might buy unquestioningly into the lies being sold to the American people, many will not be fooled. The speakers at the rally and the participants in the march know well that war is never inevitable, and it is the leaders of countries that through the working people into wars, and history always presents alternative opinions.

Said in a statement released by the organizers of the march:

We believe that any problem can be resolved in a peaceful way, and we are against any future conflict against the nation of Iran. We want peace on our planet, not war and no more false flags. The people of Iran and America do not deserve to be used as tools for the benefit of the 1%. We the people of the world will lose in this war and nobody will win from any side, except the very few people who are orchestrating this insane war. We want to prevent any invasion to Iran and we want to make it clear to President Obama and the government that we don’t want any war with Iran. Going to war with Iran means more tax money will be invested in the war, that in education or health care. Going to war with Iran means the possibility of future bigger events and possibly war with other nations such as Russia, China, and Pakistan. For the future of the human civilization and our mother earth, let’s stop this madness and make our voice heard. Peace will come when all come together as one. 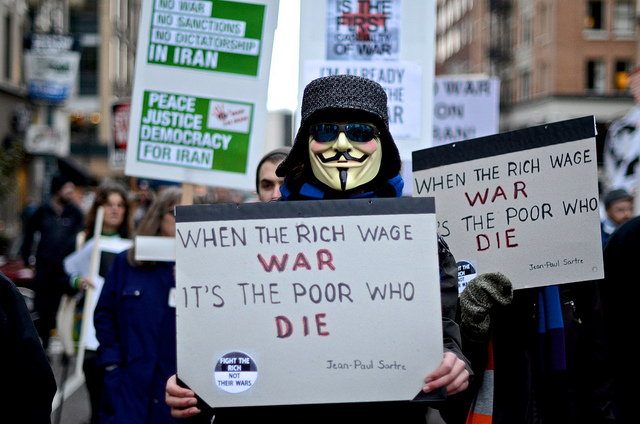