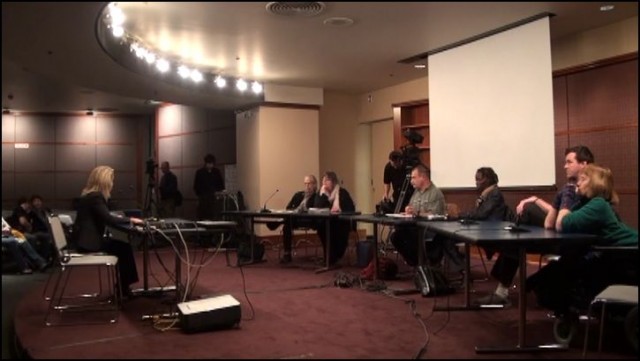 The final public meeting to hear testimony on proposed amendments to the Portland City Charter was held Wednesday, February 22, in the Auditorium of the Portland Building. On Wednesday, February 29, from 6-9 pm in City Hall, the commission will vote to determine whether amendments to the city charter, outlawing the herding of humans like cattle and spraying them with chemicals like bugs, will be included in the primary ballot, referred to the City Council, or turned down completely. This was the last chance for people to sway the commission face to face.

As a representative of www.opdxlive.org, I was there to stream the hearing and give video testimony gathered by opdxlive streamers of equine and chemical misuse. When I started writing this article I was going to go all florid about how I was moved by the oral testimony. “Write about the times you cried”, they said. Then I looked at the tape again and realized anything I could write would be superfluous and self-serving. And not as good.

This transcript is far from complete, the hearing went over time, and is excerpted shamelessly for greatest emotional impact. The quotes are not edited; they are just not the complete testimony. All emphasis is that of the speaker.

“My experience with being at non-violent events is that the horses, under the pretense of being used for crowd control, are actually being used primarily to smash into protesters who the police decide are in the street for some arbitrary amount of time and they have grown fed up with us specifically in the street. That is when they give the command for the horses to swing around and they swing their rears around and they all coordinate as you saw in the video and knock us down, knock us apart.”

“I’m also opposed on the merits of the proposal. I have volunteered for the PPB for over 16 years as a volunteer police officer and I have learned that the mounted patrol actually has the effect of reducing tension in both normal police and crowd control situations that I personally observed. I also recognize it’s not a perfect world. The officers follow the orders that are given to them by their superiors and elected officials. The horses are extremely well-trained for these situations and are a safe and practical way to manage these difficult situations. I had the opportunity in this last year, I was the first volunteer officer given the opportunity to do this, to train on the mounted patrol and I was extremely surprised and happy to see the professionalism of the training staff and the officers in this process. The subcommittee did not study the different facets related to the horses and crowd control and as a result I feel it would be inattentive for the commission to send this language to the voters. Also, I have personally trained on the use of pepper spray and have felt its effects and while uncomfortable, if properly used, it too is an excellent non-lethal tool for officers to use.”

Aaron Colter, resident of SE Portland, testified about his personal experience with crowd control including this incident that occurred during the Police Brutality march on February 6:

“The worst thing that I saw was when police chased a young man into Ladd’s Addition, tackling him and starting to beat him while they arrested him. Immediately horseback officers surrounded the individual being arrested and the officers arresting him so that people like myself and the photographer for the Oregonian couldn’t see how they were arresting this individual who seemed to be in quite a lot of pain from what we could hear, of course not see. I would urge the charter commission to bring this to the voters because ultimately the people who want to feel safe should want to decide how their police force keeps them safe. I understand that there should be more expert testimony and I thank the people from the Portland Business Alliance and the Citizens Crime Commission for bringing up those topics but again the reason that I would like to see this presented to the voters is because we are the people living in the city and we should be able to decide what the police use to keep us safe.” 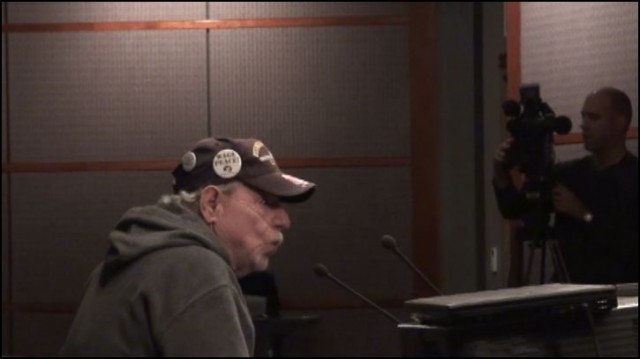 “I love the police, I want you there if some asshole comes running at me. . .There is a place for pepper spray. As a member of the gang violence task force I want to tell you I’m not going out there without it, I carry it myself.

I was on the front line with Elizabeth who was the gal who got pepper sprayed in her mouth. I was on the front line when that happened and I saw that with my own eyes. She had her hands down. Now Elizabeth has got a mouth on her and she was yelling and screaming and saying all kinds of ridiculous things but that’s okay. She had her hands down and she was on the sidewalk, in fact I have it photographed. About a row back a police person, a cop, just pulled his pepper spray out and got her right in the mouth. I was shocked. I was angry. I was all sorts of things, because I’m down there as a grandmother, protesting peacefully and I have a right to do that against the social injustices in this country.”

“I’ve forced myself to overcome my fear and go to some marches, primarily permitted ones, but my primary interest is gardening and Occupy is heavily involved in gardening, urban homesteading, bringing food to the community. When the media comes to those types of events they sit in their car for 20 minutes and when they see we’re not going to get arrested refuses to cover us.”

“I appreciate everyone who came out for free to testify tonight.”

Sean Kealiher, the high school student who was repeatedly punched by an officer during the Police Brutality march on February 6th, introduced himself as a political activist:

“I want to ask a rhetorical question real quick, regarding pepper spray for use in crowd control: Why is it that in a war zone and this is stated from the Geneva act, that chemical warfare is banned such as mustard gas, pepper spray, mace and tear gas yet you can use it on innocent peaceful protesting civilians? So just answer that to yourself real quick…. All right, I hope you gave a good answer to yourself.”

“I’ve worked with kids, especially in the Oregon Children’s Intensive Behavioral Program. I get hit, kicked, spit upon on a daily basis. If I ever raised my hand to one of those children I would be fired and in jail. Yet an officer can punch my son in the face for civil disobedience just because he doesn’t like what he has to say? What if I treated my own child like that, heaven forbid he said something I didn’t like, and I punched him in the face? I would be in jail. There is no accountability. I shouldn’t have to worry if my son attends a peaceful protest that he isn’t going to be trampled by an animal or sprayed with a chemical weapon?”

“People have talked about this being taking tools away from police officers but these are not tools, they are weapons. And they are used as weapons; they are not used to de-escalate. The lady (from the Citizens Crime Commission) mentioned that they are used only on violent protesters or riots. If anyone has seen the media recently they wouldn’t believe that’s accurate. If you look at the 50 most popular pictures of 2011 three of them are peaceful protesters being pepper sprayed, one sitting down, one a ninety year lady, one on the streets of Portland for airing their grievances to the government in peaceful protest, so that argument holds no weight.”

Joe Walsh testifying as a representative for Individuals for Justice and The Oregon Progressive Party:

“If those horses fell on one of those people that night we could have had a manslaughter problem on our hands. You have this great opportunity in this commission with 15 voters, essentially people outside of city hall, the citizens of Portland would decide. How great is that? You being part of this wonderful commission would stand tall and say, “I did that. I protected those horses and the human beings who come in contact with them.” It is a fantastic opportunity!”

“The spraying? Any human being that has a soul would stop it. Without a doubt I know there is someone on the commission, someone in Portland, or someone who is going to testify that we need that element of a weapon because if we don’t have it we have to go up (escalate the violence). I know someone’s going to say that and they’re wrong. You had all the police there (eviction night) that you needed by about a factor of 5. You needed the police surely but you didn’t need everybody from every city around the area! We are not violent people, and we all should be involved in this Occupy movement in some level. My hope is you’ll stand tall. My hope is you will not allow the City Council to kill this issue. This is not going to die. It’s not going to die. It’s already out. We will fight this tooth and nail until we win and we can smile.”

You can still submit telephone testimony or videos to the commission until they vote. Get contact information from the Commission’s web site: http://www.portlandonline.com/chartercommission/

The stream of this video can be found in the library of www.opdxlive.org.