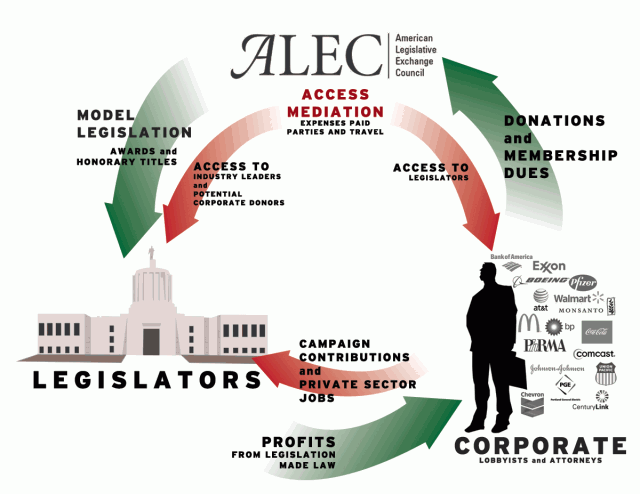 Today Portlanders join concerned citizens, students, and Occupiers in over seventy cities across the nation to target corporations and legislators involved in the American Legislative Exchange Council (ALEC). The largest corporations in America, including ExxonMobil, Bank of America, BP, Monsanto, Pfizer, and Walmart use ALEC to funnel donations to legislators and craft bills benefiting their membership over the well-being of ordinary people. Responding to a national call from Occupy Portland, this is the Occupy Movement’s largest coordinated action this year, confronting ALEC corporations in the cities in which they do business throughout the nation.

“ALEC writes legislation focused on amassing more profit for the wealthiest 1% at the expense of our communities. We took action today to challenge this destructive organization and to empower communities rather than corporations,” said Kari Koch of Portland Action Lab.

Portlanders will gather at 11:30 AM at SW Naito and Ankeny before marching and making stops at nonviolent actions organized by some 15 social justice, environmental, and anti-capitalist groups. Many long-standing community groups, working under the banner “Portland Action Lab,” assisted in organizing the day, including Rising Tide, the Animal Defense League, We Are Oregon, Jobs with Justice, the Portland Central American Solidarity Committee. All of the actions targeted corporations involved with the American Legislative Exchange Council.

ALEC is comprised of state and federal government legislators and many of America’s biggest corporations. In ALEC task-forces and committees, lobbyists work directly with legislators to draft and advance cookie-cutter “model” bills that serve the interests of the corporations rather than people. According to ALEC’s figures, nearly 10% of state laws originate from their efforts. Wisconsin Act 10, attacking public employee unions, mirrors ALEC’s anti-union agenda and was introduced by Governor Scott Walker, an ALEC member from 1993-2002. Arizona’s widely criticized anti-immigrant legislation (SB1070) also has roots in ALEC model legislation.

“The decisions affecting our communities should be made democratically, not through a corrupt system that hides the influence of the very corporations that benefit at our expense. ALEC is representative of a failed system in which profit and greed are dominant over everything else,” said Nicholas Caleb of Occupy Portland.

The corporations, which run our government, place profit over people, self-interest over justice, and domination over equality. Corporations do not seek consent to extract wealth and power from the people and the Earth. Foreclosure, hunger, climate change, unemployment, lack of health care, biodiversity loss, xenophobia/immigrant detention, animal exploitation, prison population growth and so many other issues that are facing us are not unrelated problems. They are connected.

These problems stem from the dominant culture’s obsession with profit, individual maximization, consumption and greed, which corporations only take to their logical and frightening conclusion. These tenets reinforce other intersecting systems of oppression: race, gender, sexuality, class and domination over nature. These interconnections can be seen in how women and people of color are the most drastically and disproportionately effected by societies ills. We cannot work from a narrow economic perspective alone.

We are one of a multitude of global movements taking direct action against oppression, marginalization, poverty, violence and domination and for a more just and sustainable world. We take direct action as a means of obstructing practices we protest and reclaiming our agency in creating the world we live in. Direct action manifests in many ways such as sit-ins, strikes, blockades, boycotts, banner drops, culture jamming, and performance. The roots of direct action are deep and range from Susan B. Anthony and Martin Luther King Jr. to Rachel Corrie and Tim DeChristopher. Our social fabric is woven with direct action from the Boston Tea Party, to the Silent Sentinels’ pickets for women’s suffrage, the NW timber workers strike of 1935, SNCC sit-ins and the Freedom Rides, the occupation of Alcatraz, actions against nuclear power and weapons, the forest defense movement and the shutdown of the WTO in Seattle. Direct action is a tool for building a new foundation based upon cooperation, mutual aid, and social as well as ecologically connected community.

Together, through action, we will create a new future.

Stay up to the minute on Twitter using #F29 and follow @F29pdx. Updates on actions throughout the day are available via liveblogging on the shutdownthecorporations.org national website.