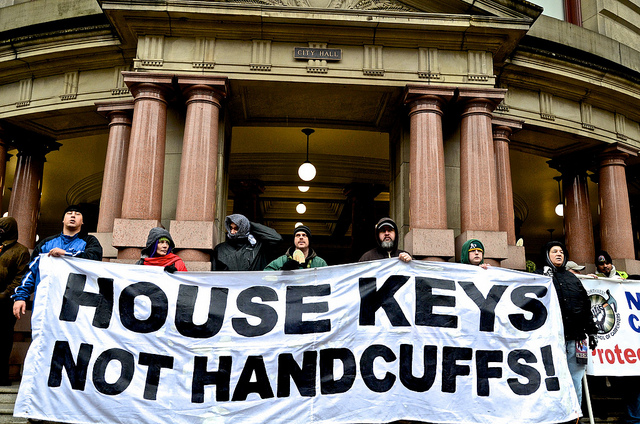 Occupy Portland’s Committee to End Homelessness is holding a meeting at the First United Methodist Church, 1838 SW Jefferson St, on March 21st from 3 to 5 pm. The meeting is open to the public, who are invited to bring ideas about how to solve Portland’s homelessness problem. The city is currently in year seven of the “Ten Year Plan To End Homelessness,” with startlingly few results to show for its supposed efforts.

In late December 2004, the City of Portland and Multnomah County released their Ten Year Plan to End Homelessness. Information about the current progress on the Ten Year Plan is sparsely available from the Portland Housing Bureau’s website. The last available report on the plan is from 2010, wherein the city claims the following victories: “[In 2010, the city] Moved 2,272 households from homelessness to permanent housing… at least 150 families received emergency shelter and assistance … [and] 1,112 individuals secured employment.” Prior years’ reports highlight other similarly underwhelming victories against homelessness. The 2010 report does not detail the number of people who entered homelessness in 2010, nor does it address the systemic causes of homelessness in Portland or identify solutions to provide immediate relief for the city’s estimated 5,000 homeless individuals.

If this is an issue you feel strongly about, the Committee asks that you come lend your voice.