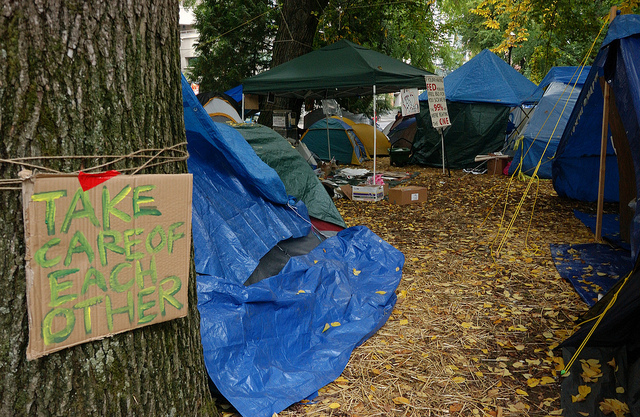 Jeremy O’Leary frequently works with the City of Portland as a volunteer on emergency preparedness, community resilience and long term sustainability issues. He is a permaculture designer, on the steering committee for PREP, chair of CNRG and has completed the Train the Trainer program for the Community Emergency Response Teams.

In response to the insightful Portland Mercury article “The First Four Minutes: A Timeline of Portland’s Upcoming Cataclysmic Quake”, I have a couple of suggestions on how to better prepare for the First Four Minutes, how to respond in the hours and days afterward and how we can make the recovery phase more then just gathering the pieces.

In my opinion, Emergency Preparedness, Community Resilience and Sustainability are the same thing, on different timelines. This is where Portland’s green scene can tremendously improve how we respond in the wake of a disaster as big as a Cascadia Subduction Zone Earthquake. If there was anything we learned from the disaster caused by Hurricane Katrina is that we cannot safely sit back and wait for rescue. The sheer size of the disaster overwhelms official emergency response capacity. As was illustrated by books like Paradise Built in Hell, we will need to work with what we have and figure how to make it serve our needs. That being said, there is plenty that we can do now to improve quality of life, reduce long term costs and make community disaster response effective/useful. I’d argue that we will never actually ready for the Big One, it’s a question of to what degree we are prepared.

Having very well-insulated houses, rain water catchment systems, bicycles, vegetable gardens, fruit & nut trees, greenhouses, alternative energy… are all, or could be extremely effective in the recovery phase after a disaster. The wrinkle is that we need to be thinking through all of these in the context of a disaster. The problem of sorts is we don’t have teachable moments very often here in Portland. Many of my friends, when asked about what they do when the power goes out, get out their laptop and watch a movie.

In addition to all of the pre-emergency sustainability steps, plus some emergency response training, having community centers is tantamount. A place where people can gather to figure out who is and isn’t home at the time and start checking on the nearby houses, apartments or office buildings. Schools could serve nicely as community centers, assuming the building is actually still mostly assembled. There are a few underfunded programs for seismically upgrading school buildings, but it also important for these buildings to be reasonably functional. If there are solar PV panels mounted on the roof, they could be very helpful in at least charging cell phones (assuming the towers are powered + vertical), the batteries for HAM radios, radios and hopefully lighting.

School kitchens and large cafeterias will be critical for feeding people if/when the power is out for an extended period. A really big detail that is painfully glossed over in conversations about emergency preparedness is the number of people who don’t have enough food in the house for tonight, let alone for the three days that emergency managers recommend.

There are three efforts that are very much of note that should be mentioned.