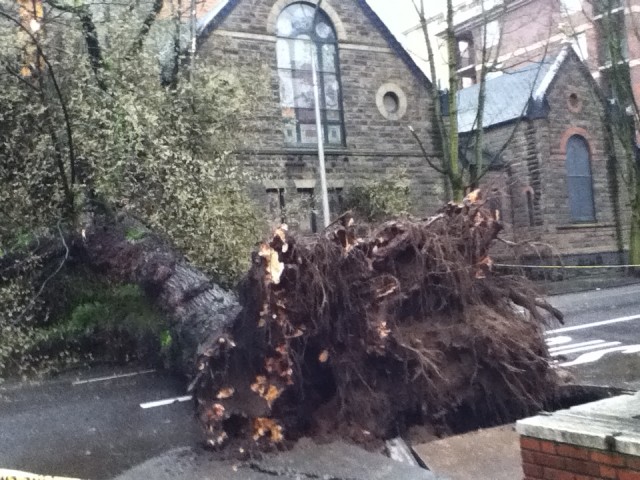 Portland, OR — A century-old Elm tree uprooted itself in protest during the evening rush hour, blocking the entirety of SW Jefferson Street.  The tree was quoted in mid-fall, saying,

“Occupy Portland has inspired me to carry out this act of civil disobedience to raise awareness of the current climate crisis and the everyday things we all do to make it worse — such as driving. We all need to re-evaluate our habits and request that our governments do the same to reach definitive agreements at the Rio+20 conference on sustainable development this June.”

Its last words were followed shortly by a loud thud.

According to the Oregonian, “Police set up roadblocks at Southwest Jefferson and Broadway to keep the area clear of traffic, but traffic was backed up for several blocks.”  However, the Oregonian failed to mention the motives behind this dramatic uprooting.

Said The Lorax, spokesperson for the Elm,

“It’s come down to pulling stunts like this
To raise awareness about the global climate crisis
And even then,
The corporate-owned mainstream media neglects to cover the actual story
And that’s a big worry.”

Worldwide, motor vehicles currently emit well over 900 million metric tons of CO2 each year, with the United States responsible for nearly half of the world’s automotive carbon dioxide.

Occupy Portland is planning a series of environment-related events for the month of April, starting off with a Tour of Portland’s Worst Environmental Offenders this Saturday, and culminating in Earth Day celebrations.

This nonviolent direct-action was not approved nor endorsed by Occupy Portland, however members agree that it was carried out in #solidarity with the goals of the movement.