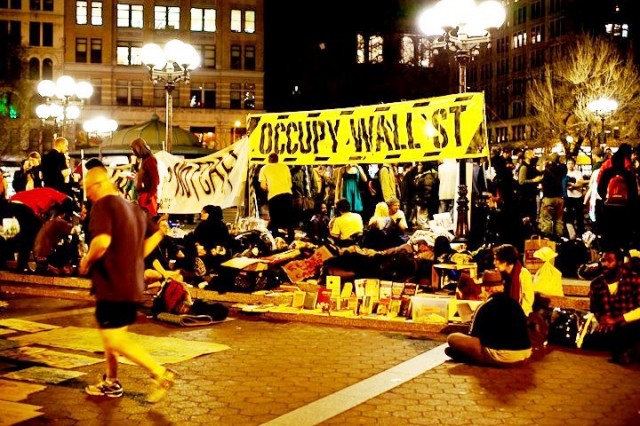 During the celebration of the six-month anniversary of Occupy Wall Street, the phrase was repeated again and again: “See you in May.” The phrase refers to the plans for this coming May Day–the historical workers’ holiday and a day of action for many causes around the world–which this year will bring Occupy protests in many cities, including a call for a general strike in New York. But we won’t have to wait until May, it seems. Protests have been kicking off all week.

It began on March 17th, the six-month anniversary itself. Occupy Wall Street re-occupied Zuccotti Park. The police decided to re-occupy as well, driving protesters from the park with at least 75 arrests, and causing injury wherever they went. The NYPD barricaded the park illegally, and then pursued protesters across the city, lashing out violently at the media, causing seizures, injury, and property damage as they went, including using a protester’s head to break the window of an apartment building. If protesters wished to signify that winter is drawing to a close and that it is time for Spring, the police also seemed to say that they were ready to pick up their role as the armed force of the state, and the banks, without hesitation.

On the 20th, Occupy Wall Street moved to Union Square, site of labor and social protests throughout history. While the sidewalks of the Square are technically open all night because of the subway station, this didn’t stop the police from pushing them violently, and declaring the square closed. During the chaos, a woman was pushed to the ground by police, seen in the video below, and knocked unconscious. Police destroyed the protesters books and other property.

The next night, the 21st, Occupy Wall Street took a back seat, joining in solidarity with the Million Hoodie March for Trayvon Martin, an unarmed seventeen year-old shot and killed by a self-described “neighborhood watchman”. The shooter has yet to be arrested. Thousands took to the streets to call for justice, while the NYPD made it clear which side they were on. Over five hundred officers reportedly descended on Union Square, pushing people out of the park.

While New York was celebrating the springtime with free speech, they were not the only city to do so. Quietly, Occupy Oakland re-occupied, taking a new park on the 21st, which they have dubbed Huey P Newton Park. They were, of course, met by the police the next day, who insisted that they take down the tents, and then made odd demands about where food ought to be. Their future is uncertain, but their determination to occupy is in bloom.

In Montreal students turned out on the 22nd in the tens of thousands, to protest tuition hikes. CBC News reports that the march stretched for as many as fifty blocks, as it snaked through the city. While the protest was reported to be peaceful, police used chemical sprays on the demonstrators. The government refused to back down on the hikes, leading the student group C.L.A.S.S.E. to respond, “If the government doesn’t announce a retreat on the [tuition] hike today the next step will involve actions that disrupt the economy.”

And it’s not stopping there. On Saturday OccupyMARINES are planning a march in New York City against police brutality in response to the events of the week.  At the very same time, Portland will be having a rally in support of Trayvon Martin at Peninsula Park.

Why this week? Why now? Because it’s Spring, and things have gone on far enough. The police will meet the protesters in the streets, armed and willing to use their weapons, but the protesters will keep coming. Whether it is justice for racially motivated murder, an end to education cuts, the defense of public space, or simply free speech for its own sake–the protesters are here. They won’t be going away. It’s springtime, and the whole world is abloom.