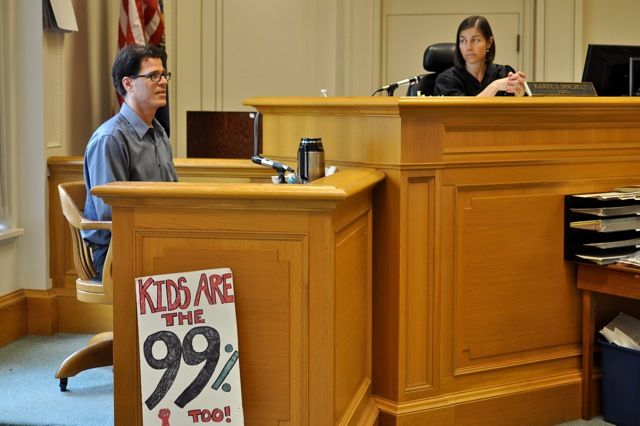 Jonathan Zook tells his story of the events surrounding his arrest. Photo by Kendall.

If you’re wondering what it’s like to watch the cops rush your father, rough him up and haul him off to jail in the middle of what you imagined to be a peaceable exercise of your First Amendment rights, Jonathan Zook’s 11-year-old son can give you one answer.

Zook, a middle school teacher with thirteen years of classroom experience (he also spent some years working in a program for homeless high school students), was arrested on the night of December 17 in the vicinity of the anti-NDAA march in downtown Portland. The State charged Zook with resisting arrest, interfering with a police officer, disorderly conduct, and assault. Prosecutors offered Zook a plea bargain of 16 days in jail, but he instead chose to stand trial and prove his innocence. As the defense presented its case on the second day of trial, Zook, his partner, and their two children, all present at the time of his arrest, took the stand to assert these charges are completely false.

The strategy of the prosecutor is to discredit, malign, and vilify Zook, and to separate Zook’s case from the cause of Occupy Portland (which might conceivably garner jury support in a city that generally regards the movement as favorable). So intent was Prosecutor Brian Lowney on characterizing Zook as different from other occupiers, he began his closing argument, “This isn’t about Occupy Portland. It’s about Mr. Zook.”

The prosecution case offered the conflicting testimony of police officers. On the afternoon of April 18, the defense called Zook, his partner of 18 years and their two children, as well as Bao Vuong, a Portland occupier who attended the same march but did not see the arrest.

Zook’s 11-year-old son brought to court the sign he designed and carried in the march, which reads, “Kids Are the 99% Too!” When Zook’s attorney, Kyle Dukelow, asked Zook’s son if he had wanted to attend the December march, the boy answered, “I’m excited, passionate about the marches; I like what they’re for.”  He testified that he was holding hands with his father when an officer on a bicycle first struck Zook. Immediately afterward, the child’s mother came forward and took his hand as other police officers rushed in, slammed Zook against some glass doors, knocked him to the ground and handcuffed him.

Jonathan Zook’s partner testifies about her family’s interaction with Portland Police on the night of December 17. Photo by Paul.

Zook’s partner, a Portland State University instructor who holds a doctorate in urban studies and planning, was asked during her testimony, “Why did you take your children to the march on December 17?”

“We want to raise them to be good citizens and good community members, to stand up for what they see that’s wrong,” she explained. “We think that carries over to society. We should stand up and speak out when we see what’s unjust. I would not have taken them if I thought there was a threat of violence or confrontation.”

In an effort to discredit Zook’s partner during cross examination, the prosecutor asked if she believed that something upsetting, like seeing a family member arrested, might alter a person’s perception of what happened. “I suppose so,”  she said. “But I remember this event very vividly.”

Zook’s 13-year-old daughter testified that she also wanted to attend the march. She regards these marches as fun, and said she likes attending them with other people they know. This was confirmed when Zook took the stand. His attorney asked, “Did you want to go to this march?”

“Yes, but we put it to the kids to decide,” Zook answered. “We want to make sure they’re excited about it, that they feel comfortable with it, and that’s how it was.” He said they attended the march on December 17 because the children wanted to go.

Bao Vuong, one of many Occupy Portland protesters at the march, saw the Zook family there. Vuong testified that Zook “stood out for me because he was always with his family, so in my mind I identified them as a nuclear family, and that image struck me because I grew up in a single parent home, so if I see a nuclear family protesting with their children, I recognize them. It means something to me.” 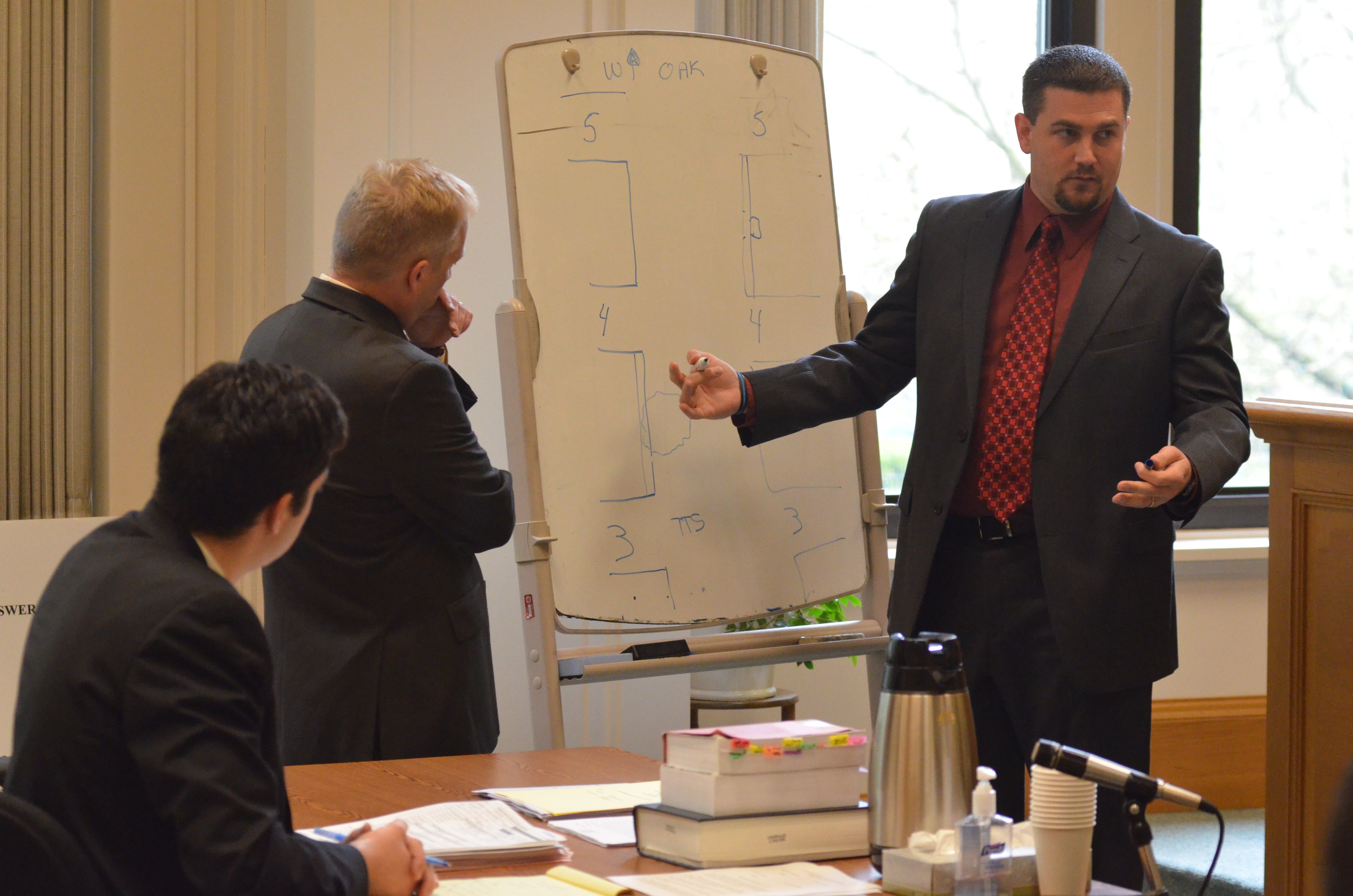 The Zook family describes a case of police over-reaction and unnecessary use of force and threats, based on nothing more than Zook making a simple, somewhat flippant remark to one of the police officers who was shouting at them. Zook says he told the officer, “I speak English,” to indicate there was no necessity to yell. The next thing he knew, the police started slamming his body around. Both of Zook’s children, as well as his partner, all of whom are diminutive in size, were threatened with a can of pepper spray, menaced by police officers, shouted at, and commanded to stand back during Zook’s arrest.

Zook said that when the police began to behave violently toward him, he became totally passive. He testified, “I remember thinking, there is no way I’m going to do anything in front of my kids that would allow these officers to do anything more than they were doing to me.” When asked, “Did you resist in any way?” he answered simply, “No.”

In his closing statement, the prosecutor attempted to discount the children’s testimony and to malign Zook for bringing them to court. Twice he used dismissive language to describe the family’s presence in court. “The family was trotted in here to generate sympathy for him,” Lowney said. Later Lowney warned the jury, “He trotted in his family and Mr. Vuong to distract you.”

The defense will present its closing statement on April 19, after which the six-member jury will begin deliberations.