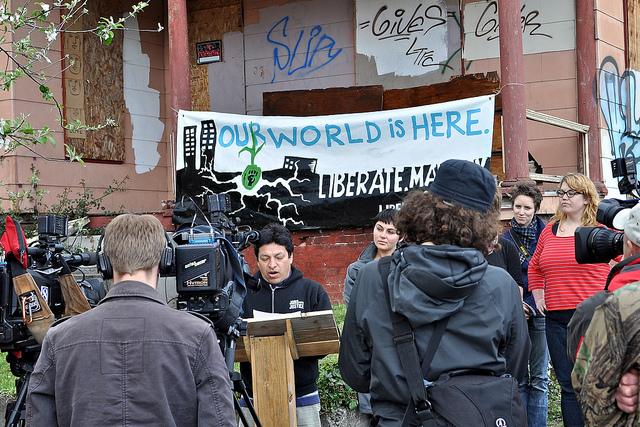 Spokespeople from three Portland coalitions gathered together in front of a decrepit, bank-owned property today, April 26, to announce that they would be organizing a community-based takeover of property on May 1, as a first action in a series of efforts to liberate property for the use of those who reside in the immediate area. Activists from the Portland Central American Solidarity Council (PCASC), Jobs with Justice (JwJ), and the Portland Liberation Organizing Council (PLOC) each spoke in turn about their motivations and plans for the day of action that promises many actions across the globe.

The activists stressed that the people who live on the land ought to be the ones who decide what happens there–not banks, development corporations, or the city. This action, and all following actions, would be about “community control of community resources.” They said that this was not a new idea–their efforts are part of a tradition that includes the Back to the Land movement, and similar efforts in Greece, Spain, New York, Chicago, Oakland, and many other cities in all countries. They said they want to “reclaim what is rightfully ours”, and in order to do so, they invite “all workers to unite under one banner.” The time for waiting for the government to fix things is passed. Isabel Charle, spokesperson for PLOC, said “this system isn’t broken–it’s working exactly how it’s supposed to.”

The bank-owned building behind the speakers at 33 N Fargo Street, with its boarded-up windows, neglected rose bushes and broken railing, served as a poignant example of how well the system currently functions. Someone put years of love into this house and garden before it was taken from them. This is “probably” not the building that PLOC is planning to liberate, smiled the activists. They left open the possibility of returning a foreclosed family to their home, taking a larger building for use as a community center, or utilizing vacant land as a garden space. With these potential direct actions, the activists will take matters into their own hands. 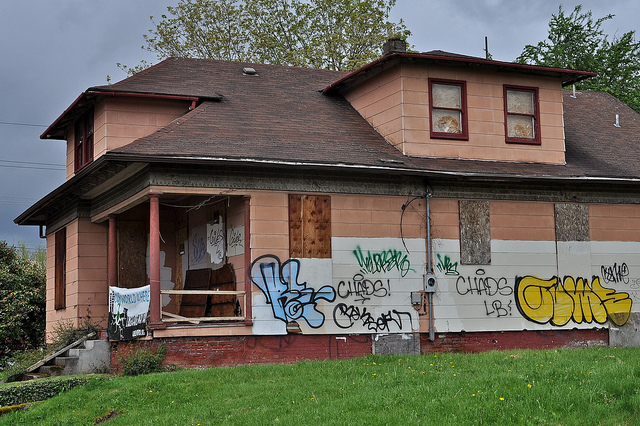 JwJ spokesperson Marco Mejia also mentioned the permitted march and rally beginning in the South Park Blocks at SW Salmon Street on May Day. He said that march has adopted the St. Paul Principles of respect for diversity of plans and tactics, so even though that march is permitted and the PLOC plans are not, both actions will stand in solidarity. The theme of the day is that “we won’t be divided,” said Mejia.

As to the potential of conflict with the city authorities over the actions, the group said:

We call on Sam Adams to cooperate with and support our plans.  Sam Adams last November offered this support to the Occupy movement: “It is my sincere hope that the movement, with its focus on widespread economic inequity, will flourish in its next phase — a phase where we can focus all of our energies on economic and social justice, not on port-a-potties and tents,” Adams said [LA Times, November 10, 2011]. That phase is here, Sam, we call on you to support the movement by restraining your police force.

The PLOC action will begin with an announcement and rally at Woodlawn Park, at 9 AM on May 1. After the rally, activists will march to the property, which will remain undisclosed until that time. 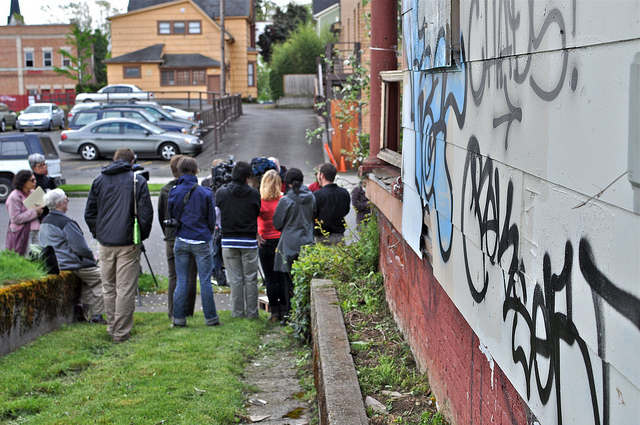