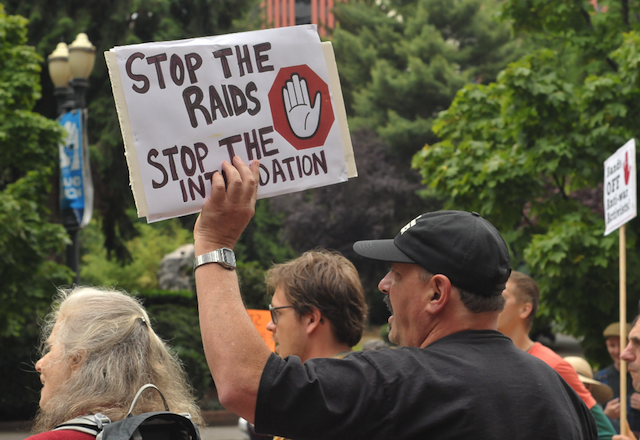 A growing number of groups, many of which are based in Portland, have signed on to a statement written by the Committee Against Political Repression condemning the FBI’s recent raids against activists in Portland, Olympia, and Seattle. During the raids the FBI seized computers, black clothing, and anarchist literature.

The most recent FBI raids took place in Portland on July 25th in the North and Northeast sections of the city, specifically at: 6846 N Greenwich Avenue, 4820 NE 31st Avenue, and 7129 NE 8th Avenue.

The FBI has claimed it conducted the raids as part of an “ongoing violent crime” investigation according to FBI spokesperson Beth Anne Steel, but according to the Committee Against Political Repression statement, the raids are targeted against anarchists. The warrants served by the FBI specifically mention anarchist literature as evidence to be seized which calls into question the FBI’s claim of ferreting out violent crime with these raids.

However, as the statement notes, the FBI is intimidating people whose political ideas do not conform with the status quo, particularly people who are pushing back against the growing economic and ecological crises facing the people of this planet brought on by the greed of the 1%.

The statement also connects the raids here in Portland and throughout the United States with those occurring in other countries whose people are also struggling for ecological, economic, political, and social struggle. The brutal attacks on protesters in Egypt, Tunisia, and Syria, as well as the many other nations’ peoples rising up in the Arab Spring are only different from the Portland Police Force’s brutal attacks on marchers on May Day in the degree of violence.

The FBI has a long history of violating the rights of activist groups in the United States. From the Palmer Raids of 1920 (the FBI’s website acknowledges the Palmer Raids were “not a bright spot,” but assures visitors that through them, it learned “important lessons about the need to protect civil liberties and constitutional rights.”), to the Counter Intelligence Program (COINTELPRO) between 1956 and 1971, to the post-September 11th branding of environmental and social justice activists as “terrorists”, to more recent raids of the past two years targeting activists such as those seeking justice for the people of Palestine and working to end the wars and occupations in Afghanistan and Iraq, just to name a few.

The following is the circulating statement by the Committee Against Political Repression expressing solidarity with the current targets of FBI repression:

On Wednesday July 26th, the FBI conducted a series of coordinated raids against activists in Portland, Olympia, and Seattle. They subpoenaed several people to a special federal grand jury, and seized computers, black clothing and anarchist literature. This comes after similar raids in Seattle in July and earlier raids of squats in Portland.

Though the FBI has said that the raids are part of a violent crime investigation, the truth is that the federal authorities are conducting a political witch-hunt against anarchists and others working toward a more just, free, and equal society. The warrants served specifically listed anarchist literature as evidence to be seized pointing to the fact that the FBI and police are targeting this group of people because of their political ideas. Pure and simple, these raids and the grand jury hearings are being used to intimidate people whose politics oppose the state’s agenda. During a time of growing economic and ecological crises that are broadly affecting people across the world, it is an attempt to push back any movement towards creating a world that is humane, one that meets every person’s needs rather than serving only the interests of the rich.

This attack does not occur in a vacuum. Around the country and around the world, people have been rising up and resisting an economic system that puts the endless pursuit of profit ahead of the basic needs of humanity and the Earth. From the Arab Spring to the Occupy movement to now Anaheim, people are taking to the streets. In each of these cases, the state has responded with brutal political repression. This is not a coincidence. It is a long-term strategy by state agencies to stop legitimate political challenges to a status quo that exploits most of the world’s people.

We, the undersigned, condemn this and all other political repression. While we may have differences in ideology or chose to use different tactics, we understand that we are in a shared struggle to create a just, free, and liberated world, and that we can only do this if we stand together. We will not let scare tactics or smear campaigns divide us, intimidate us, or stop us from organizing and working for a better world.

To add your group’s name to the solidarity statement, please email: [email protected]

2 comments for “Community Groups In Solidarity Against FBI Raids”