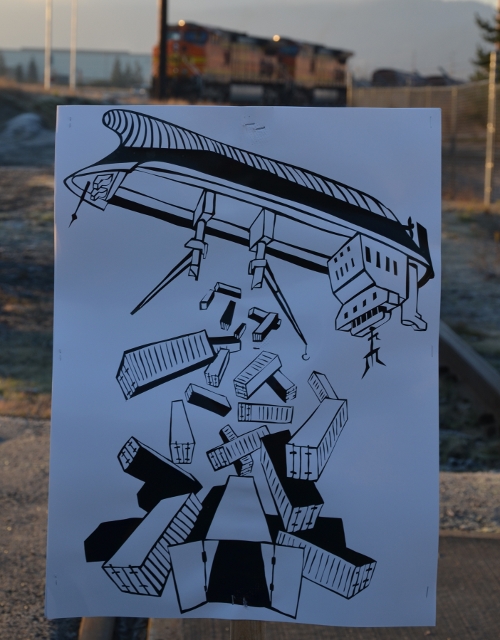 An international cabal of corporate lobbyists met behind closed doors in San Diego from July 1 – 7. Their aim was to move the Trans-Pacific Partnership (TPP) toward completion. TPP negotiations have been in process for over two years, yet, until recently, its proposals and agreements have been carefully screened from public view.

A leaked TPP document published at Public Citizen has revealed what the 600 corporate advisers involved in the negotiations – including representatives from Verizon, FedEx, and Walmart – have been cooking up. Considering the contents of this document, it is no surprise that the public and even elected representatives have been kept in the dark.

Publicly, TPP is being described as a Free Trade Act (FTA). FTAs already in existence have raked in giant profits for the corporate elite and resulted in layoffs for workers internationally and a race to the bottom in terms of living conditions and rights. But big business tops are not content; through TPP they are ratcheting up the power of their money-making weapons of mass destruction. To call TPP an FTA understates its scope: If NAFTA was a hand grenade, TPP is a bunker buster.

What is perhaps most astonishing is that the architects of TPP seem to have a blatant disregard for its destructive potential. Their greed has blinded them to the political instability and popular revolt certain to be a consequence of TPP. The corporate elites imagine their rule to be absolute and eternal. Sheltered by these illusions, and goaded on by the need to increase their riches regardless of social costs, they are crafting a bomb that may blow them up as well.

The countries currently buying into TPP are the US, Australia, Brunei, Chile, Malaysia, New Zealand, Peru, Singapore and Vietnam, representing a combined market of 658 million people worth $20.5 trillion annually. (1) Canada, Japan, and Mexico also are expected to get on board and TPP has built-in mechanisms to allow other nations to join after its ratification.

While China could theoretically become a member, there can be little doubt that part of the intention of TPP is to help the US build a coalition dominated by its big business interests in order to compete against China’s economic might. Upping the ante on this competition will foster greater political animosity, which, in turn, will lead to a course of growing conflict, including the possibility of war.

Historically, international capitalist competition is not determined by gentlemanly agreements, but by the law of the jungle and, frequently, brute force. While it may be a relatively simple matter for the US to bully its economically weaker TPP partners into line, China is not so easily dominated. Cruder and more and costly measures than diplomacy  will be required to get the competitive upper hand and TPP is laying the foundation for this possibility.

What all FTAs, including TPP, share in common is the way they open doors for multi-national corporations to maximize profit by transferring operations to nations with cheaper labor. In NAFTA’s first 10 years this outsourcing resulted in the net loss of 879,280 U.S. jobs. (2) Considering the greater number of countries involved in TPP, the number of lost jobs will be even greater.

The nations to which these jobs are outsourced also suffer great employment devastation, through the dislocation of local economies by larger scale corporations. For instance, NAFTA resulted in the loss of 1.3 million Mexican farm jobs to US agribusiness (3), leaving the farmers to toil for a living in the brutal Maquiladoras, or move to the US to seek work and suffer persecution as “illegal” immigrants. Even more damaging is how NAFTA accelerated the privatization of Mexico’s once strong public sector, resulting in huge layoffs, wage cuts, and a dramatic drop in the country’s unionization rate. Other than a well-connected few within the developing nations that sign onto TPP, the majority of citizens stand to lose much and gain little if TPP is enacted.

One area where TPP departs from past FTAs is its range of issues and the degree to which it flagrantly defies national sovereignty in favor of multinational corporate interests. Only two of TPP’s 26 chapters concern trade, with the bulk focused on new corporate rights, privileges and tools to override local government interests.

Perhaps the most controversial tool would be the creation of a three attorney tribunal – with no conflict of interest checks – to judge foreign corporate complaints. If, for instance, a foreign-owned corporation argues profit loss because of its host nation’s overtime laws, the tribunal could rule that the country’s taxpayers owe compensation to said corporation. Costly judgments could result from any regulations, including labor law, local environmental standards and financial rules.

In short, TPP’s tribunal would act above sovereign governments as the hammer of multinational corporate interests. Because of their size, US-based corporations have the most to gain from this arrangement. As negotiated under the Obama administration by U.S. trade representative Ron Kirkland, TPP is extremist. Public interest and national sovereignty are sacrificed on the corporate agenda altar to a degree beyond what a Republican president could likely swing. Revolts against TPP’s effects must be considered a possibility – revolts that could set into motion events not reckoned by the 1%.

Now is the time to begin working to defeat TPP. Many of the organizations currently expressing concerns about it, including the AFL-CIO leadership, are limiting pressure on the Obama administration to amend or drop it. What is needed first and foremost is that TPP’s agreements and proposals be open for all to see. The public needs to be educated about its effects. If such efforts are linked to a mass action campaign for jobs – not cuts – it would go a long way toward the creation of a grass-roots political movement to kill TPP.

Such a movement cannot afford to counter the TPP with an equally reactionary protectionist program – the position now being put forward by the AFL-CIO leadership and their “buy American made” slogan. At first glance, this approach appears to be common sense for many rank and file US workers. “If we want to prevent the offshoring of American jobs we should only buy products made at home” goes the reasoning.

However, there are several problems with this line that undercut our ability to combat TPP. One problem is that very few products are exclusively US made. The division of labor needed to produce even most “American made” commodities is international in scale, otherwise, few, if any, of the corporations that make them would be able to survive. Therefore, the logic behind this protectionist slogan is utopian, harking back to a time before the economy became globally dependent.

There are other more pernicious consequences to protectionism. It fosters jingoistic “America first” attitudes that, as political tensions increase between economically competing nations, can easily be manipulated into support for military adventures against the interests of the 99%. In addition, even if US jobs are protected by measures such as tariffs against foreign competitors, this, in effect, exports unemployment and divides the working class by nationality. If extremist 1% measures are to be defeated, it can only be done by a political policy that unites the 99% across national boundaries. Protectionism creates just the opposite.

Workers need their own international campaign to fight TPP. The US labor movement could begin by linking up with other union and community groups from signatory TPP nations. An international conference could be set up to share information, assist one another’s efforts to combat TPP, and plan for joint actions. However, in order for such a conference to sidestep purely symbolic value, serious effort – through mass organizing –  must be dedicated toward turning the ideas it generates into a physical force.

The passage of NAFTA was a major workers defeat from which we are still suffering.. Labor and its allies were unprepared to effectively fight it, though there were notable solidarity efforts between US. and Mexican unions. TPP stakes are even higher. Statesman-like appeals to drop – or at least reform – NAFTA that were made to President Clinton by labor groups failed. Appeals to President Obama, especially after the passage of the Korea, Colombia, and Panama FTAs, will similarly sink. Unions need leverage to defeat TPP, and that leverage comes from mass organizing and action.

For further reading check out the leaked document at

2.)See “NAFTA – Related Job Losses Have Piled Up Since 1993” by Robert E. Scott for the Economic Policy Institute.
http://www.epi.org/publication/webfeatures_snapshots_archive_

3.) Disadvantages of NAFTA By Kimberly Amadeo for About.Com US Economy.
http://useconomy.about.com/od/tradepolicy/p/NAFTA_Problems.htm