The Lombard Overpass of the railroad cut that bisects St. John’s – from the Willamette River to the Columbia Slough – was the site of an August 18 demonstration, with over 75 activists protesting and educating people about the proposed transportation of coal through Oregon and Washington. With faces smudged in “safe soot” and carrying signs demanding the use of clean energy sources, the crowd engaged passersby both on foot and bike, as well as in car, many of whom were unaware of this toxic proposal.

According to Barbara Ellis of the North Portland Coal Committee (NPCC), eight coal trains a day would come through this segment of St. Johns, each train consisting of 120 coal cars, also known as gondolas. The coal, said Ellis, contains mercury and uranium, and despite the use of a surfactant (itself poisonous) to keep the coal dust from blowing off into neighborhoods, parks, forests, and waterways, this dust will still spew forth from the train cars, a fact that BNSF Railway readily admits.

Sunday’s action was organized by the NPCC. For the past few months various groups opposing the coal exports – including We Are St. John’s, Occupy St. John’s, North Portland Coal Alliance, Greenpeace, Columbia Riverkeepers, Sierra Club, and Community Alliance Against Coal – have spent Sundays knocking on the doors of over 1100 households between Willamette Boulevard and Columbia Boulevard, within three blocks of the St. John’s cut. “As we knocked,” said Ellis, “most people didn’t know about coal going down the Gorge or in their living rooms.” 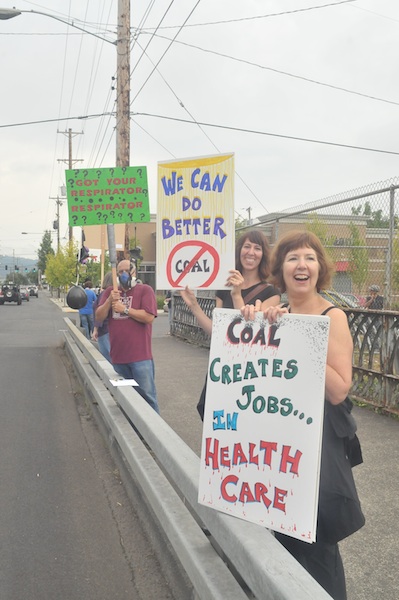 The proposed project would include six export terminals, three each in Oregon and Washington. The coal, shipped from the Powder River Basin in southeast Montana and northeast Wyoming, would pass through the Columbia River Gorge and then through towns and cities such as Troutdale, Camus, Milwaukie, Oregon City, Vancouver, Eugene, and Scappoose, before eventually being shipped to Asia. According to the North Portland Coal Committee, each car of the train would spew one pound of coal dust per mile traveled. This dust can travel 1.5 miles on either side of the tracks. In addition to the trains, coal barges are also being planned for travel over the Columbia River.

In addition to the toxic ramifications of moving this coal – and the accompanying health care costs that will inevitably accompany it – there also are more obvious financial costs. Ellis says the train tracks must be upgraded for the weight of the coal trains, and BNSF, the company responsible for upgrading the tracks, has tried to get $4 million from the lottery for this upgrade. “They’re expecting Oregonians to pay for death trains,” said Ellis.

At a listening session held by Senator Ron Wyden on Monday August 9, the issue of coal exports was brought up within the context of the Trans Pacific Partnership. Two panelists – Kathy Fitzpatrick, Mosier City Councilor and Brett VandenHeuvel, Executive Director of Columbia Riverkeepers – opposed the project and urged Senator Wyden to direct the Army Corps of Engineers to conduct a study that takes into account the sum effect of all proposed coal shipping through both Oregon and Washington rather than piecemeal examinations of each segment of the project.

Despite repeating over and over that Oregonians have a right to knowledge and transparency, Senator Wyden refused to move for a more comprehensive study of the issue.

To get involved go to: http://www.facebook.com/NorthPortlandCoalCommittee and http://www.goodgrowthnw.org, or contact the North Portland Coal Committee at: [email protected] or (503) 285-3131.

Friends of the Columbia Gorge will also be holding a press event outside the U.S. Army Corps of Engineers Portland office on Tuesday, August 28 at noon.  According to their press release, Portland City Councilor Amanda Fritz will be there to discuss Portland’s role in these projects and the efforts of the City of Portland to join cities like Stevenson, Washington in passing a resolution addressing concerns about coal trains. 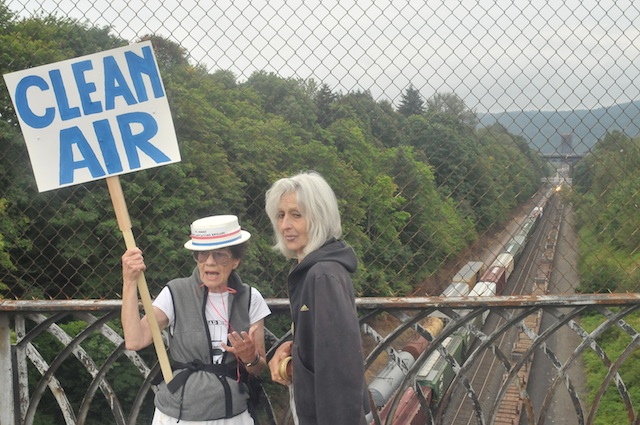 2 comments for “Community Continues to Speak Out Against Coal Trains”