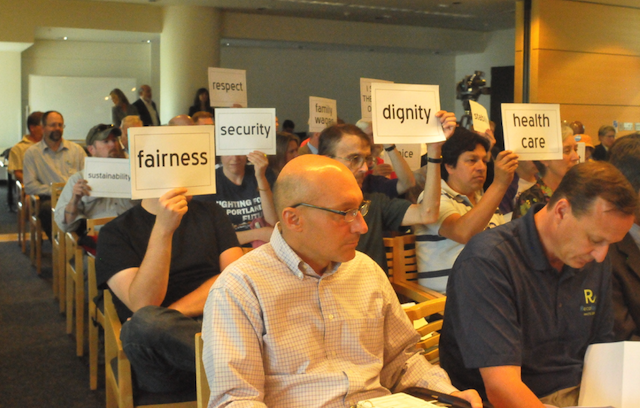 Metro seasonal workers have been trying to organize since December, 2011. Unlike their unionized counterparts at Oregon state parks, Metro workers receive lower wages and are not offered health and dental benefits, sick leave or vacation days. Most importantly, they lack job security, since their yearly rehiring is based on the whim of Metro rather than experience.

“These workers wished to organize themselves into a union,” said Laborers Local 483 organizer Toby Green. “Their reason for doing so was for the opportunity to gain dignity and respect for the work they perform. Job security, health care, and a pathway to full time work are all issues that mean dignity and respect to these workers.”

Prior to the council meeting, Green talked about Metro hierarchy, including the place of seasonal workers within it. “Metro has an elected regional council, a chief operating officer, a fleet of attorneys, an HR department,” Green explained. “Below them is a whole other layer of managers and assistants. Then you finally get to the front line service providers who are the Rangers who do both utility, customer service and enforcement work at the Parks. Below that level, you finally get to the Seasonals. These are entry level jobs in the truest sense of the word. They are not disposable jobs.”

“What saying no to recognizing the seasonals desire to form a union means is that the issues that sparked the organizing are not being addressed,” said Green “Metro may not recognize these workers as part of our union, but we see them as our members.”

According to Green, reports have emerged from Blue Lake Park that because of the union organizing drive, Metro is ending the season early – a not so subtle form of intimidation. Legally, both according to United States and international law, workers have a right to organize without intimidation; however, writing legislation and enforcing legislation are not the same.

“When workers think of speaking up,” said Green, “they must always weigh their future against standing up for what is right. The boss has the ability to lay them off at any point with no reason whatsoever. The boss can bring them back based on his needs. It was reported to the Union that surrogates (non-union workers) for the boss were warning the Seasonals of retaliation if they tried to unionize. Full time rangers who heroically looked to help the campaign came under suspicion and were being watched closely. The hallmarks of an anti-union campaign were being set in place, thus why we needed to go public. Through the eyes of the worker,” said Green, “the message is simple: if you stand up, you will be penalized.”

Because their employment is temporary, seasonal workers already constitute an unprotected workforce. Without union representation to help secure contracts that mitigate that vulnerability, the people who work to make our parks pleasant during the months we use them most head into the off-season unsure if they will have a job come spring.

“For the father of four who will be unemployed in a few weeks,” Green told the Metro Council, “the prospect of not being rehired next year is frightening. For the woman who has committed multiple years of her life in service to her community with the hope of attaining a full time position, not being invited back would be crushing.”

Metro’s intransigence showcases a lack of respect not only for the dignity of workers, but their place in society as a whole. As democratic institutions, unions at their best represent the founding ideals of our country, a group of people getting together in pursuit of life, liberty, and happiness.With an imbalance of power so heavily weighted in Metro’s favor, the leverage it can bring to bear on the right of workers to organize is unconscionable.

“Imagine the entire weight of a regional government on your back, the lack of jobs out in the community, and a human resources department actively desiring to stop the drive,” said Green. “Just as important are all the relationships that are formed and the camaraderie that makes work special. Does any ‘reasonable’ person wish to be a troublemaker and disrupt such a balance, even if that balance puts good hardworking people into poverty? It is overcoming this fear that is the very heart of why people organize into unions and these workers have demonstrated it now on two occasions.”

Referring to Metro’s tactics of intimidation, Green asked the council, “Is this the way that good jobs are created? Forming a union to collectively bargain with Metro should be considered a good thing as it is good for the workers and the community, not something to be penalized.”

“By relying increasingly on seasonal and temporary employees, Metro is finding savings at the expense of the quality of service and at the expense of opportunities for the residents of Oregon,”  said Laborers Local 483 Business Manager Richard Beetle, urging the council to cease its “short-sighted policy” of delivering services through a “low-wage model.”

Like Green, Beetle urged the council to work with the seasonal workers rather than against them. “Let’s chart a new path forward. How can we work together to protect and expand these services? We, your labor partners, can work with you on that. Working together we can make this agency a great place to work, an employer of choice, a beacon of economic opportunity, and a model for employees in the region.”

After his council appearance, Green turned to the future, including an October 4 Workers Rights Board meeting that will focus on the current battle, as well as inequities faced by all temp and seasonal employees of our city and regional governments.

“The season is over and these workers are going one of three places: unemployment, a new job or if really lucky, college,” Green said. “For the Laborers, the strongest tie that we have is that our members, or want-to-be members, live and die in the community they serve. The hard question has to be asked, ‘Is there a better way?’ We know this much, the Wal-Mart model of providing services is not the way to go.”

The Workers Rights Board hearing on seasonal workers and temporary employees at the City of Portland and Metro will be held at 6:30 PM on October 4, at the Charles Jordan Community Center on 9009 N Foss Avenue. 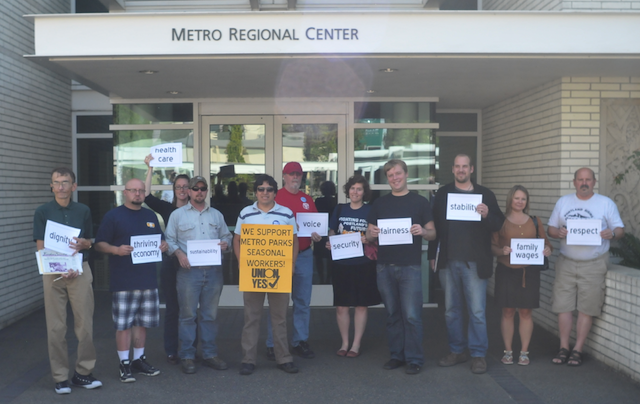