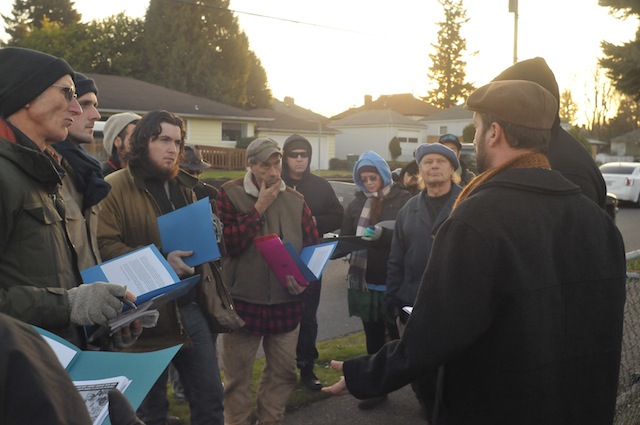 Supporters prepare to canvass residents living on the blocks surrounding Debbie and Ron Austin’s house, informing them of the Austins’ eviction, what they could do to fight back, and signing them up for the We Are Oregon Rapid Response Network.

On the morning of January 16, soon after Ron Austin had gone to work, Debbie Austin and her two children awoke to the sound of the Multnomah County Sheriffs and Portland Police banging on their door. At the demand of Fannie Mae, the police forces entered the Austins’ home at 4207 NE 77th Avenue, and forcibly evicted them. Fannie Mae has now placed a private security force at the house to guard against the Austin family from moving back in with the help of the community.

When Debbie and her children were removed from the house, they quickly went to their next door neighbor’s, and now are living safely in another neighbor’s home. Because she and her daughters were forced out of the house so quickly, Debbie was unable to bring with her many essential items, including her cancer medications. On January 17, a lawyer for Fannie Mae said he would allow her a small amount of time to gather what she needed.

The Austins were the first family in Oregon that publicly fought their eviction, a battle that began in December 2011. Even with Ron and Debbie both enduring cancer treatment, they had made all their payments, but Fannie Mae said that they missed one, even though this may have been due to a clerical error on the part of the bank. The Austins sought justice in the courts, but like many contesting foreclosure, their case was thrown out because they could not afford a lawyer.

It is no small irony that Fannie Mae is evicting the Austins and hiring private security to guard a currently vacant house. Fannie Mae is a publicly owned company, a government-backed mortgage regulator that controls half of all mortgages in the United States. We the People, including Debbie and Ron Austin, own it, yet the Austins’ tax dollars–and all Portlanders’ taxes–are being used to fund Debbie’s, Ron’s, and their daughters’ eviction. These tax dollars are creating empty houses so that banks and developers can increase their profits. 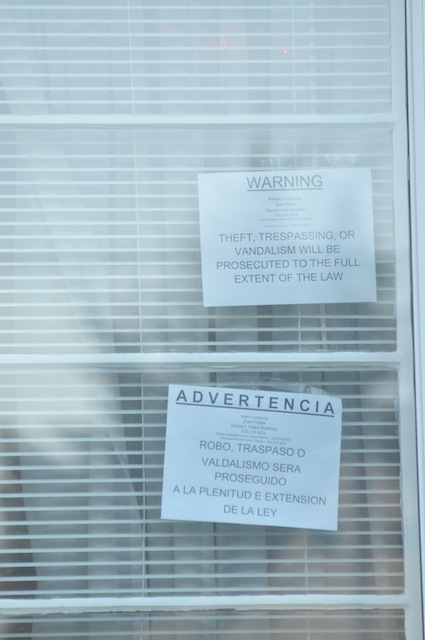 Like many families dealing with foreclosure and eviction, the Austins fell into trouble after battling health bills. In any other industrialized nation this would not have been an issue, at least in terms of paying the mortgage, because those other countries have accepted health care as a human right and have established some form of universal health insurance. “We are told in the corporate media that people fall into foreclosure because they have made irresponsible choices, but the number one reason it happens is because of unexpected health bills,” said Kari Koch, an organizer with We Are Oregon. “This is not about people being irresponsible, but government being irresponsible.”

Still, no evictions would be possible without Multnomah County Sheriff Dan Staton who oversees all evictions in the county. He is using tax dollars and public resources to enforce these evictions and as a result is helping create blighted neighborhoods instead of strong communities. “Ultimately we hold Sheriff Staton personally responsible for this and for all evictions in our community,” said Koch. “We’re demanding no more evictions and no more empty houses.”

Staton will soon be hearing that message. On the evening of the January 17 over 30 people fanned out to canvas residents living on the blocks surrounding Debbie and Ron’s house in the Cully community, informing them of the Austins’ eviction, what they could do to fight back, and signing them up for the We Are Oregon Rapid Response Network (RRN). The Austins clearly have a lot of support. Signs opposing evictions dot many of the lawns in the neighborhood, and as the canvassers huddled on the corner of 77th and Prescott before heading to knock on doors, three neighborhood residents, familiar with the Austins’ fight, expressed their support, including offering money to help their neighbors.

After the third person gave one of the canvassers twenty dollars to give to the Austins and then went home to tell Sheriff Staton that she wants an end to all evictions, Koch noted how of all the homeowners with whom she has worked, the Austins have the most support from their neighbors. From that support, which they have received since beginning this fight, it is clear that the Austins are considered an integral part of their community. “That tells me,” noted Koch, “that the Austins–not some security guards–deserve to be in that house.”

Want to get involved? Call Sheriff Staton at (503) 988-4300 and let him know that you support the Austins and that you want all evictions stopped.

Sign the petition to Fannie Mae telling it to stop evicting people from their homes. The petition is at: http://action.weareoregon.org/page/s/tell-fannie-mae-to-stop-taking-our-homes

To sign up for the Rapid Response Network to get text alerts about stopping evictions, text @ploc-openrrn to the number 23559. 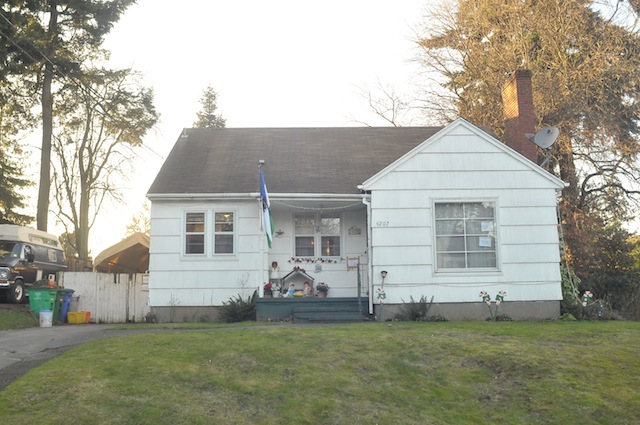