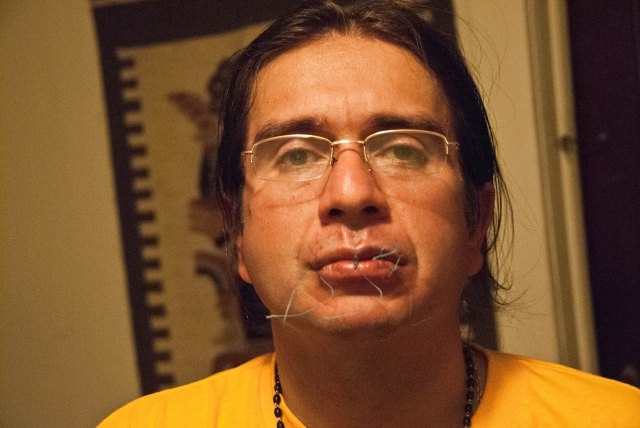 If Jorge Parra lives to see the Portland Auto Show being held from January 24th through the 27th, he will have passed his 65th day on a hunger strike in support of the Association of Injured Workers and Ex-Workers of General Motors-Colmotores (ASOTRECOL). Appearing at press conferences outside the North American International Auto Show in Detroit, Parra, who has been on this third hunger strike since November 20, 2012, first apologized for having a hard time knowing what to say due to his lack of eating, and then thanked the crowd of over 100 supporters who had gathered to protest against GM.

Parra was fired from his job in 2011 after being employed at the GM-Colmotores plant in Colombia. He began working there in 2004 in good health, but left with herniated discs, carpal tunnel syndrome in both hands, and tendinitis in his shoulders and elbows. Parra then organized ASOTRECOL to protect the human rights of GM workers and ex-workers, and to denounce the abuses committed by GM. Over 200 injured workers have been fired from GM-Colmotores after suffering injuries and illnesses on the assembly line, leaving them without workers’ compensation, medical coverage, or job prospects to support their families.

There is little dispute that these workers were injured on the job, were fired illegally, and that Colombian labor officials collaborated with General Motors in reaching a decision acceptable to GM while disregarding the health of the injured workers. The inspector who authorized the firings was sanctioned by the Colombian Ministry of Labor for using falsified documents, and GM Colmotores has not been cleared regarding the termination of these injured workers.

For over 530 days ASOTRECOL has maintained an encampment outside the US embassy in Bogota, choosing that spot because without the aid of the United States government during the current financial crisis–the United States government currently owns a controlling stake in GM–General Motors would have ceased to exist. Yet, despite that aid as well as a commitment by both the governments of Colombia and the United States to a Labor Action Plan that would improve labor rights, and was seen as a condition of the Colombia Free Trade Agreement, these abuses continue.

On August 1, 2012, Parra and twelve other members of ASOTRECOL began a hunger strike, demanding General Motors resolve these issues. These demands were that GM-Colmotores recognize the occupational nature of their injuries, pay pensions and disability payments to those unable to work due to handicaps, compensate workers for economic wages and assets lost, and reintegrate workers into the GM workforce or retrain them for other positions. That hunger strike was suspended when on August 22nd GM agreed to mediation. But according to Parra, the mediation ended “with GM offering little more than $30,000 per worker–not enough to even cover surgeries the injured men needed.”

After mediation failed, Parra and supporters for justice for the injured and fired workers tried pressuring GM in more conventional ways. They engaged in letter writing campaigns, media interviews, and multiple protests outside GM headquarters in Detroit, but to no avail.

Decrying a “lack of serious commitment on the part of General Motors” Parra sewed shut his lips and, for the third time, resumed his hunger strike on November 20th. In a statement on the ASOTRECOL website, Parra said he would not end the hunger strike until there is a “final and just resolution” to ASOTRECOL’s demands which were that “this situation be resolved directly with the parent company, General Motors, not with Colmotores nor in Colombia” and that General Motors engage with ASOTRECOL, not with individuals.

Throughout the United States, including here in Portland, activists have been educating the public about ASOTRECOL’s fight as well as pressuring General Motors to settle with the injured workers. Some of the campaign has focused on making managers of local dealerships aware of how GM treats its Colombian workers. Additionally, they have been reaching out to unions and labor groups who should find instructive the way GM has treated its workers in Colombia: it is a blueprint for what GM and other corporations wish to accomplish in the United States. 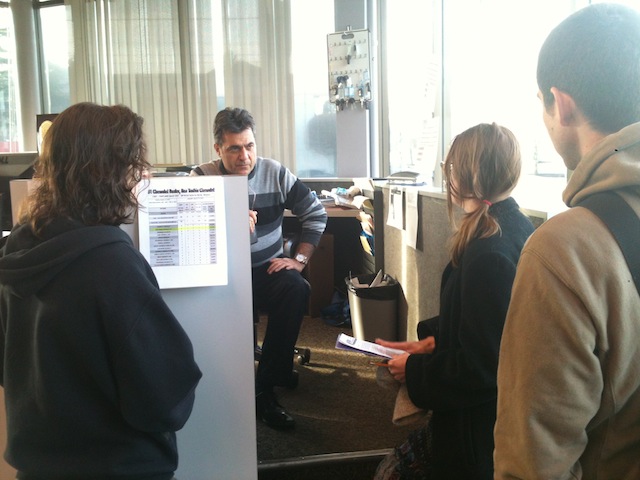 Members of the Portland Central America Solidarity Committee delivering a letter to the manager of Ron Tonkin Chevrolet informing him about the injured workers. Photo by Craig Hennecke.

When Parra was in Detroit in October, seeking direct negotiations with GM at its headquarters, he also had the opportunity to talk with auto workers throughout the Midwest. They shared with Parra their “horror stories”–two-tier wage systems that give companies an incentive to continually hire low wage workers and create tension between workers; supervisors forcing workers to continue working in near 100 degree heat; and weakening unions no longer able to guarantee worker rights. Parra wrote on the ASOTRECOL website, “I was surprised to hear that these practices were happening here, though I am familiar with similar conditions in auto plants across the world. In conversations with workers, it seems to me that multinationals are testing out new systems of worker repression in developing countries and now they are transferring those systems to the ‘developed world.’”

While Parra was writing those words, the Republican dominated Michigan legislature was preparing anti-worker legislation misleadingly named “Right-to-Work”. The bills were signed into law by Governor Rick Snyder in December, and now Michiganders join the workers in 23 other states who “enjoy” the right to work for less wages and benefits. The Colombia Free Trade Agreement, much like NAFTA and CAFTA before it, was supposed to raise all boats. Instead, as was entirely predictable from reading the terms of these arrangements–essentially investors’ rights laws allowing for the free flow of capital, but not labor–rather than wages, benefits, and protections rising to US standards, those US standards are further sinking toward those found in factories like GM-Colmotores.

“Justice must not be optional in Colombia or the United States,” wrote Parra. “If the laws that get passed don’t hold companies accountable, then the companies will continue to violate workers’ rights. As a consequence, workers in the United States will live under the constant threat of having their jobs outsourced to cheap labor where unions are disallowed. If GM and others are held responsible for human rights abuses, we gain job security collectively and physical security individually. Stopping the abuses in Colombia is a must, especially if we want to protect workers in the United States.”

Connecting the struggles of workers in Michigan and the United States with those in Colombia, Jake Dacks, an organizer with the Portland Central America Solidarity Committee (PCASC), said, “We cannot afford to silo workers’ struggles based on borders that corporations don’t recognize. Right-to-work legislation in Michigan and free trade agreements with Colombia are a logical result of coordinated attacks on organized labor, and GM wouldn’t be fulfilling its duty to its shareholders if it didn’t take advantage of these opportunities to exploit its workers.”

Dacks plans on using the Portland Auto Show as an opportunity to educate more people about GM’s indifference toward the health and security of its employees. “The auto shows that are happening across the country are GM’s highest profile events of the year, and if GM continues turning a blind eye to injustice, their abuses will be exposed in Portland, as they have been at the Detroit auto show.” 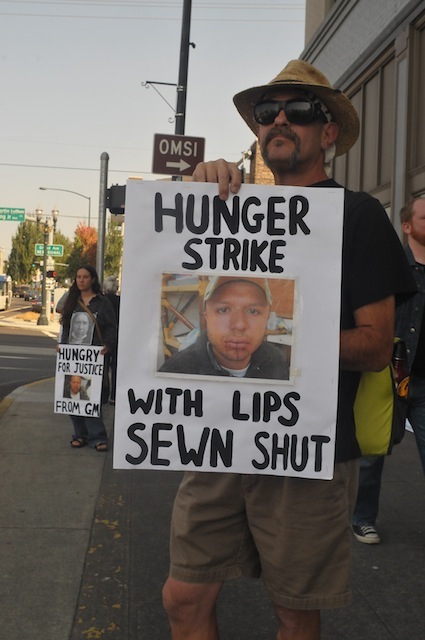 The protests at the auto show in Detroit also included discussions of workers’ rights both in the United States and Colombia, as well as addressed the auto industry’s contribution to climate change. Kevin Young, an organizer for the Washtenaw Community Action Team based in Ann Arbor, Michigan, who was at the auto show said, “It’s been encouraging to see these efforts at coordination among autoworkers in countries around the world. There’s a lot of people who are attentive to what is going on in Colombia and trying to illuminate the connections between their situations and the situation of people in Colombia.”

Martin Luther King, whose birthday was just celebrated, once said that the arc of the moral universe is long, but it bends toward justice. On balance, it is fair to say that King was correct. It was not so long ago that chattel slavery was legal and people were ruled by kings. And while the United States is hardly a workers’ paradise, workers enjoy more rights than they did a century ago. These were not gifts handed down from above. People fought and sometimes died for them. The ASOTRECOL battle as well as the recent spate of anti-worker legislation such as that in Michigan, Wisconsin, and Indiana raises the same question that workers in this country asked a hundred years ago: are we disposable cogs in a machine, or are we living, breathing people whose lives are to be valued far beyond the wealth we can produce for others?

Want to get involved?    The following actions are planned:

3. 1/24-1/27 various times during the auto show for leafleting and other activities.