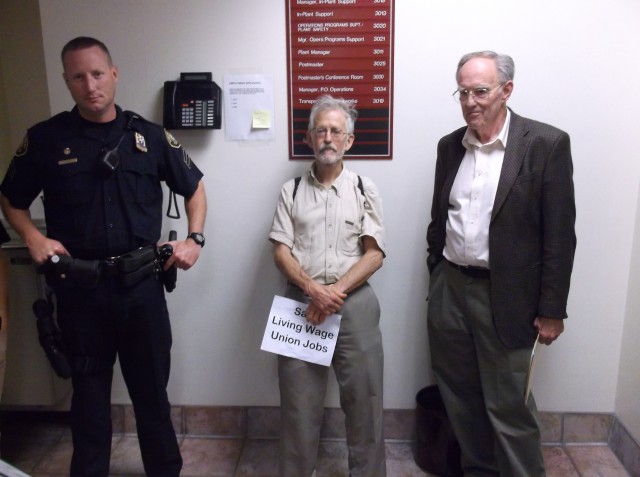 Eleven protesters invaded the office space of Portland’s senior US Postal Service management on September 18.  Slipping past security barriers on the third floor of the Main Post Office, the group occupied the hallway outside the offices of Brenda Jackson, transportation manager for the Portland district.  Demanding a meeting with Jackson, the “postal protectors” insisted that management stop subcontracting the trucking of “the people’s mail.”

Claiming concerns about safety, cost and corruption, the protesters engaged senior managers, postal security officers and finally the Portland police.  After USPS manager Rick DeWolfe promised the “protectors” he would look into setting up a community meeting with Jackson and police dropped the threat of arrest, the group agreed to disperse.

The protesters included retired postal workers, a minister, a small business person, seniors, and a union organizer, all of whom declared themselves impacted by postal privatization.

Declaring, “We’ll be back!” the “protectors” vowed to interfere with private mail transport, if postal management did not reverse the subcontracting. The group has blocked or interrupted Dill mail trucks four times this summer – with people, with a car and with a bike “swarm”.

Seven postal trucking positions were recently eliminated at the same time as the subcontractor, Dill Star Route trucking, hired 20 drivers to do twice as many mail runs as were previously needed.  The company is being paid $59 per hour for each driver, while the USPS is paying for the gas and lending the company postal trailers (in violation of postal rules) and leasing nine tractors for Dill Star use (at $30K per month).  According to union officials, postal drivers are sitting on standby without work, up to 500 hours a week, while many of the extra Dill Star trucks are running empty or have very little mail.

Bankruptcy papers show that Dill Star Route, Inc. owes the postal service over $300K.  Dill used federal credit cards to avoid the federal gas tax, and then never paid the bill.  This padded, no-bid contract was arranged by USPS transportation manager Brenda Jackson, who appears to have a special relationship with the Dill family.

Portland Communities and Postal Workers United (PCPWU), the group behind the protest, has been fighting cuts and closures to the postal service for the past year.  In May 2012, ten activists were arrested occupying Portland’s University Station post office, which has since been closed.  In April of this year, five protesters went to jail for a civil disobedience action at the Salem mail plant, which is now being dismantled with mail processing machines moving to Portland.  On July 3, five “postal protectors” were arrested for occupying Matheson Flight Extenders, a company slated to take over twelve mail handling and six mail processing jobs from union, postal workers.

“This privatization and union-busting is being carried out in the name of a phony financial emergency,” said Rev. John Schwiebert, a participant in today’s action and a spokesperson for the group.  “The security, safety, and timely delivery of the mail are all at risk.  Rural communities, seniors and the disabled, small businesses and low-income communities are hit the hardest. Postal management needs to stop and reverse these closures, cuts, and subcontracts which are sending our beloved postal service into a death spiral.”

In the past year, the Postmaster General has closed 45% of mail processing plants, reduced hours by 25% – 75% in half of post offices, put hundreds of post offices up for sale, subcontracted trucking and mail handling, eliminated tens of thousands of family wage, postal jobs and delayed mail delivery.

The USPS own studies (revealed at the March 22, 2012 meeting of the Postal Regulatory Commission), showed that big mailers leave the system as a result of such delays, costing more in lost revenue than is saved by lowering labor costs, not to mention the dramatic increase in trucking costs as mail is transported hundreds of extra miles to be sorted in the closest still open facilities. 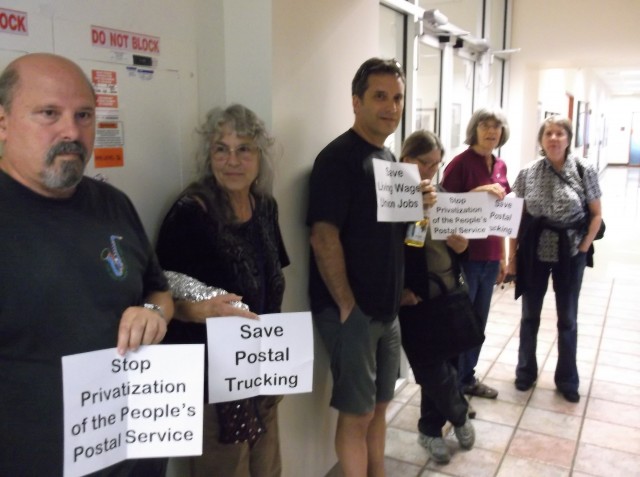