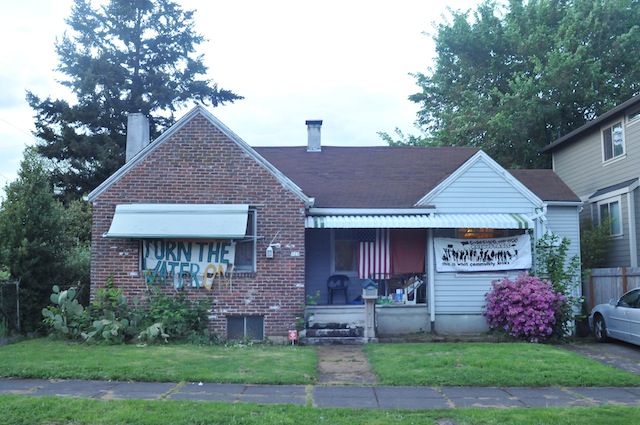 On the eve of the second anniversary of taking back her house, Alicia Jackson El was told she was to be evicted. On April 30 Judge Marilyn Litzenberger of the Oregon Circuit Court ruled that Fox Capital Corporation, the “foreclosure flipping” corporation, was in legal possession of Jackson El’s house. Jackson El appealed the decision the following day.

In rendering her decision, Litzenberger rejected Jackson El’s argument that she was illegally foreclosed on, and thus Fox Capital was in violation of Article 11, Section 4 of Oregon’s constitution stating that “No person’s property shall be taken by any corporation under authority of law, without compensation being first made or secured in such manner as may be prescribed by law.”

Jackson El–who noted that she was not a “14th Amendment artificial person”–attempted to tie in the issue of just compensation with House Joint Resolution 192, passed in 1933, which suspended the gold standard and abolished the gold clause in the Constitution. By some standards the resolution outlawed money and implied that no debts can be paid off, just transferred. By this reasoning, Jackson El argued, Fox Capital could not be in legal possession of her house because it could never, according to HJR 192, compensate her according to law.

At another point, Jackson El appeared to invert the argument, implying that since HJR 192 was illegal–the Constitution needed to be amended for it to be valid–and that gold and silver were the only legal forms of money, she again had not received proper payment for her house.

“I have not been justly compensated for my property,” said Jackson El. “Therefore I am still the rightful owner.”

Jackson El was foreclosed upon after losing her job with the City and falling behind on her payments. Her bank refused to work to with her to modify her loan, and Jackson El has consistently stated she was unfairly “fast-tracked” into foreclosure. In June 2011, her property was transferred to Fast Cash House Buyers LLC which then sold it to Fox Capital.

Stuart Fox, asset manager for Fox Capital when it bought Jackson El’s property, stated that Fast Cash House Buyers had helped with the original eviction of Jackson El. Fox said Jackson El had vacated the property, but Fox Capital could not fix up the house due to its own financial problems. Wells Fargo, which eventually took Fox Capital into receivership, took control of Jackson El’s house, later turning it back over to Fox Capital after the company had reorganized.

On May Day 2012, Jackson El, with the help of over 200 members of the community, took back her house. Despite the City turning off her water and thus creating a safety hazard both for Jackson El and her neighbors, she has lived there since. 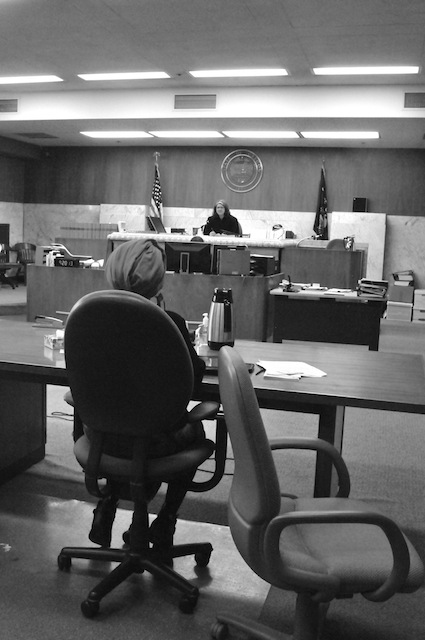 In her closing argument, Jackson El asked, “Is it the court’s position to uphold an illegal action and make it lawful? If the court is to uphold the Oregon and US Constitution, it must rule in my favor because this is unlawful.”

Litzenberger appeared to outright dismiss Jackson El’s contention surround HJR 192. The real problem with Jackson El’s argument, according to Fox Capital and with which Litzenberger agreed, was that Fox Capital had legally purchased Jackson El’s property. The title to her house, when Fox Capital made the purchase from Fast Cash House Buyers, was clean, so Jackson El’s argument was not really with Fox Capital as much as a party prior to Fox Capital, such as Fast Cash House Buyers or FCI Lender Services, from whom Jackson El got her mortgage. Ultimately, the real case is against the banking system that created and continues to create so many victims of mortgage fraud. Litzenberger–who dismissed Jackson’s request for a stay of her eviction pending appeal–more or less indicated as much, saying that even though this was a “lawful taking of property” she felt compassion for Jackson El whom like many others were victimized by the banks during the Great Recession that began in 2008.

In many ways the trial resembled a scene out of John Steinbeck’s The Grapes of Wrath. Early in the book, a man is getting to bulldoze the house of another man, Muley, who has been foreclosed upon. Muley threatens to shoot the driver, the son of a neighbor. The driver claims he is just doing his job, so Muley says he will shoot the driver’s boss, who too is just doing his job, and works his way up the ladder to the president and board of directors of the bank, who are given “orders from the East,” presumably Wall Street. “But where does it stop? Muley asks. “Who can we shoot? I don’t aim to starve to death before I kill the man that’s starving me.”

“I don’t know,” the driver replies. “Maybe there’s nobody to shoot. Maybe the thing isn’t men at all.”

Jackson El, like the thousands of others who have been foreclosed upon and evicted, finds herself in a similar position to Muley. Unlike Muley, she certainly has not contemplated violence throughout her ordeal. While she can make use of the court system, often it is inadequate for the task. Litzenberger was correct as far as the legal system goes: Jackson El went against the wrong party in this case. Legally, Fox Capital did nothing wrong, and the scope of the case was too narrow for extending Jackson El’s argument any further.

Since taking back her house two years ago, the number of people who have supported Jackson El has increased considerably. Between Jackson El’s resilience and their commitment to housing justice, she remained despite the City’s intransigence regarding her water and the constant threat of eviction.

As with so many other fights for justice, the real argument is that the system is wrong. Quite often the courts are not the place for those battles. Jackson El has filed her appeal. The appellate court’s decision, however, may not occur in a courtroom, but rather, on Jackson El’s porch.