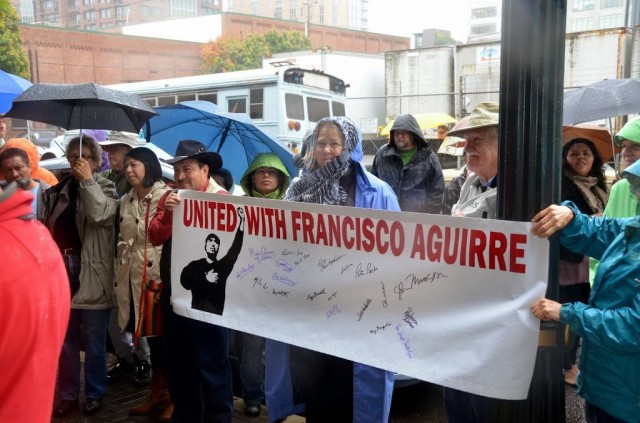 Supporters of Francisco Aguirre gathered outside the Portland Field Office of U.S. Citizenship and Immigration Services (USCIS) the day after USCIS cancelled the activist’s visa appointment.

Aguirre has been taking sanctuary in Augustana Lutheran Church since Immigration and Customs Enforcement (ICE) officials showed up at his home on the morning of September 19 in a failed attempt to detain him.

Aguirre, who has been applying for a U-Visa, was scheduled to have his biometric appointment on Wednesday, October 22, at which time his fingerprints and other “anatomical or physiological data by which a person can be uniquely identified” would be taken. (A U-Visa is available to immigrants who are victims of serious crimes and who have cooperated with authorities in prosecuting the crime.)  But on Tuesday night USCIS cancelled the appointment without explanation to Aguirre’s lawyers, according to the advocacy group United with Francisco. USCIS also did not reschedule Aguirre’s appointment.

Since Aguirre remains vulnerable to arrest and detention by ICE–even though ICE would be interfering with his visa application–some 20 supporters had planned to caravan with him from Augstana Lutheran to the USCIS. In the wake of the cancellation, Aguirre decided he would be safer remaining at the church; however, the caravan of about 20 people made its way to USCIS in a light blue bus to be greeted by cheers from other Aguirre supporters awaiting them.

Lining the sidewalk and overflowing into the street outside USCIS, a crowd of nearly 100 were eager for clarification as to the reason for the cancellation.. More precisely, the question was whether ICE had influenced USCIS to make the cancellation–a questions that remains unanswered. A recent report from the National Day Labor Organizing Network (NDLON) does note that ICE has become more aggressive in its attempts to detain and deport people without documentation. NDLON also found that “ICE has retaliated against community organizers and immigrants who organize against deportations.”

This should not be a surprise. Aside from deporting over 2 million people–under the direction of the Obama Administration–and engaging in a campaign of racism that depicts all people with brown skin as highly dangerous criminals ready to deal drugs, rape, and murder at the drop of a hat, ICE has recently been amping up its efforts to circumvent the US justice system.

When ICE agents showed up at Aguirre’s home, they lied to him, pretending they only wanted to talk about his business. Such prevarication is not confined to Aguirre’s case, and according to the NDLON report, ICE’s so-called “targeted enforcement” results in the arrest of “individuals who were not the stated target of the operation.” Those targeted enforcements have also seen ICE agents arresting people while they are working their way through the justice system, such as in court, while on probation, or in the process of a visa application like Aguirre.

Immigration rights are being violated with regularity all over the country. In Artesia, New Mexico, undocumented mothers and their children were stuffed into a prison and, until the intervention of immigrant rights lawyers, were being deported as quickly as possible, with little to no concern as to the violence they were fleeing in their home countries. Determining immigration status takes an average of 550 days before a court renders a decision. Prior to the arrival of these immigrant rights lawyers, the average time between these mothers and children arriving at the prison and having their case decided by an immigration judge was just 17 days.

At this point, ICE is acting like a rogue agency, although the deportations could be stopped with a wave of President Obama’s pen. It seems the true function of ICE may be to service the “bed mandate”–a policy that requires ICE to keep in custody an average of 34,000 detainees a day, a number that delivers a tidy profit to the private prison companies who house them. These thousands of detainees are integral parts of families and communities that ICE continues to tear apart under the directive of both Democratic and Republican politicians 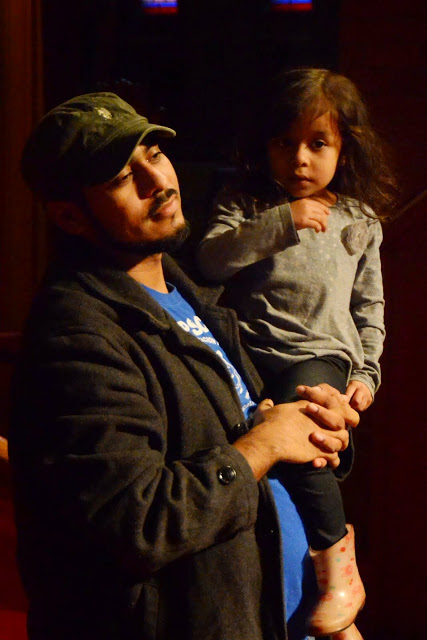 ICE also provides some cover for politicians, by showing them to be tough on “lawlessness” while masking the truth that many immigrants are fleeing violence largely created by US policy. With the midterm elections looming and President Obama and the Democrats terrified at the prospect of losing the Senate, ICE is granted the freedom to keep running roughshod, allowing it to continue undermining the US justice system and its guarantee of due process.

Though ICE finding no meaningful resistance in Congress and the White House, local jurisdictions are pushing back. Over 300 faith and religious groups have declared their support for immigrant justice and are willing to protect their communities from ICE’s depredations. Labor and economic justice groups have also entered the fight. Ordinary citizens are confronting ICE policies in ever greater numbers.

Considering the large numbers that have been attending events at Augustana Lutheran and the numerous phone calls to ICE in support of Aguirre, the added message to ICE appears to be that the more it tries to intimidate Aguirre and the members of Portland’s immigrant and immigrant rights activist community, the more resistance it will encounter.

“ICE is getting fussy, and maybe angry,” said Marco Mejia of Jobs with Justice, “because of the pressure we are putting on them. At their building last week on SW Macadam, we showed up with community support for Francisco and demanded ‘Not 1 More Deportation.’ We’ve been asking people to make calls to ICE, asking them to leave Francisco alone so he can continue his process with USCIS and the U-Visa application.

“ICE wants to disrupt Francisco’s process with USCIS and the U-Visa application so it can deport him. But in doing so, they are fueling our community organizing, because it exposes more the out of control and rogue agency ICE has become.”

Want to get involved? Call Immigration and Customs Enforcement at (503) 326-4165 and demand they allow Aguirre’s U-Visa application to continue without ICE’s interference.

Also, sign the petition in the support of Francisco Aguirre at: http://www.notonemoredeportation.com/portfolio/franciscoaguirre/

For more information go to: https://www.facebook.com/unidosconfrancisco?notif_t=fbpage_fan_invite