Over 50 people affiliated with the Portland chapter of Showing Up for Racial Justice (SURJ PDX) gathered at the Justice Center on SW 3rd Avenue on Monday July 11 demanding an immediate end to police violence and calling upon white people to take action for racial justice. The event was part of a national day of action that saw people in at least a dozen cities clamoring for police to be held accountable for their murders and acts of brutality, particularly those they inflict upon people of color.

“We’re here today to condemn racist police violence and to loudly and visibly proclaim Black lives matter,” said Choya Renata of Portland SURJ. “We’re here for Alton Sterling, Alva Braziel, Philando Castile, and all others killed by police, recently and through our country’s history. To say their names, to honor them, and to commit ourselves to working for justice.”

Braziel, Castile, and Sterling were all murdered by police in the last week, and their deaths–all captured on videos recorded by citizens–have resulted in a national outcry and nationwide protests. They join the long list of what have become household names–Michael Brown, Eric Garner, and Freddie Gray among them–of people of color who have been murdered by police. In nearly every case, including Brown’s, Garner’s, and Gray’s, no police officer has been held accountable. 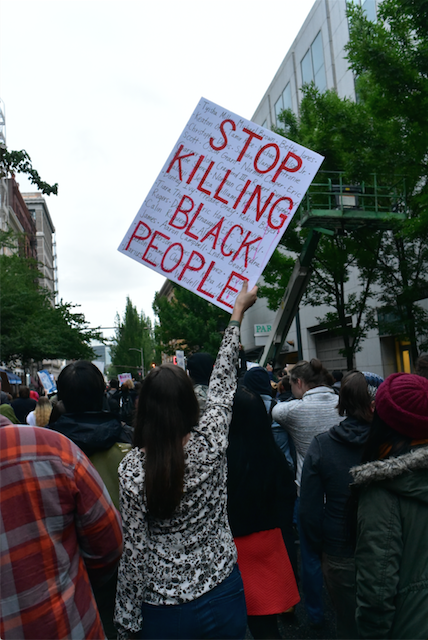 During a rally and march on Thursday July 7 that began at Pioneer Square, numerous speakers called upon white people to step up in working to dismantle the racist institutions and systems that enable police violence against people of color. That call was echoed on Monday as Renata stated, “We call on white people to join us in organizing for racial justice centered on and in solidarity with people of color.” In the short term, that includes attending the monthly vigil for Keaton Otis on July 12 at NE 7th and Halsey,and the Kids and Families Rally on July 13 at Dawson Park, as well as providing financial support to groups fighting for racial justice led by people of color.

SURJ PDX member Kari Koch said the group “supports white people in talking to other white people about racism and racial justice–moving people who might be interested or concerned, but not engaged or not fully understanding the system of violence.”

Koch noted there is a variety of ways for white people to show their solidarity with people of color organizing in Portland. “For example,” she said, “organizing can look like building the leadership of white people to advocate for racial justice in their workplaces, or working with white people to understand immigrant justice and mobilizing to defeat anti-immigrant ballot measures.”

That building of leadership should not be confused with supplanting people of color’s leadership roles in groups fighting for racial equity. “One of SURJ’s core principles is to follow the lead of people of color led movements for racial justice,” said Koch. “People of color don’t need us in order to get free. We need to challenge racism in our spaces and communities.”

The need for white people to address racism in their own circles–particularly its institutional aspects–is clear.  After all, it is not white people who are being gunned down once every 28 hours by police and vigilantes, and after the rallies and marches in support of racial justice, Black people and white people go home to very different worlds. A statement issued by SURJ PDX noted, “We are opposed to the fact that white people can get kudos for showing up for racial justice, while Black people and all people of color get targeted and even murdered.  We recognize our privilege in being able to speak out with little to no repercussions.  We don’t want kudos.  We want racial justice.”

“This organizing is part of a long history of solidarity work going back decades and generations,” Koch told the crowd. “What we’re doing today is calling out the violence in the system. We refuse to be complicit. We refuse to accept state violence. People of color are being murdered.”

For more information on how you can get involved in the fight for racial justice, go to SURJ PDX’s webpage at: http://surjpdx.org