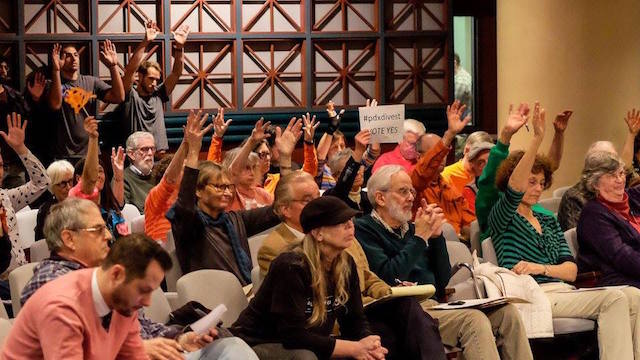 Leaving Wednesday’s City Council afternoon session, Enlace’s Interim Director Amanda Shank seemed beside herself, still not sure she believed what she had just heard. Only a few minutes earlier City Commissioners Chloe Eudaly, Nick Fish, and Dan Saltzman approved Saltzman’s amendment that would require the City to divest from all of its corporate bond holdings. Enlace, along with a wide swathe of other groups, have spent at least three years pushing the Portland City Council to divest the City from its holdings in particular corporations including Caterpillar, Nestle, and Wells Fargo because of their horrible human rights and environmental responsibility records. Those groups, which aside from Enlace include Oregon Physicians for Social Responsibility, Occupation-Free Portland, the Portland Public Banking Alliance, Jobs with Justice, the Alliance for Democracy, the Oregon Sierra Club, Jewish Voice for Peace, the Portland Prison Divestment Coalition, 350PDX, and the American Civil Liberties Union of Oregon, as well as numerous similar justice organizations, faith groups, and indigenous people, finally saw their work come to fruition, even if perhaps earlier than expected.

Wednesday’s vote also marked the end of the City wrangling over whether it would live up to some of its proclaimed social values or hide behind lofty rhetoric while investing money in corporations whose actions stand in direct contradiction to those values. Wells Fargo, for example, helps fund the private prison industry and the Dakota Access Pipeline (DAPL), while Caterpillar provides the bulldozers used by the Israeli Defense Forces to demolish Palestinian houses, farms, and olive groves as part of Israel’s illegal and murderous occupation of Palestine. Caterpillar gained infamy when an Israeli soldier used one of those bulldozers to murder US activist Rachel Corrie who was trying to prevent further eradication of Palestinian housing.

Portland’s portfolio currently stands at $1.84 billion. 20.8% of that, or $383 billion, is invested in corporate bonds. It will take 460 days for the City to fully divest itself of its corporate bond holdings.

Originally the council was to decide whether it would continue relying so heavily upon the recommendations of the Socially Responsible Investments Committee (SRIC) in deciding in which corporations it would invest some City funds. The SRIC was created by the council in December 2014 and was “charged with recommending corporate issuers for inclusion on, or removal from, the City’s Corporate Securities Do-Not-Buy List in the City’s direct investment in corporate securities.” 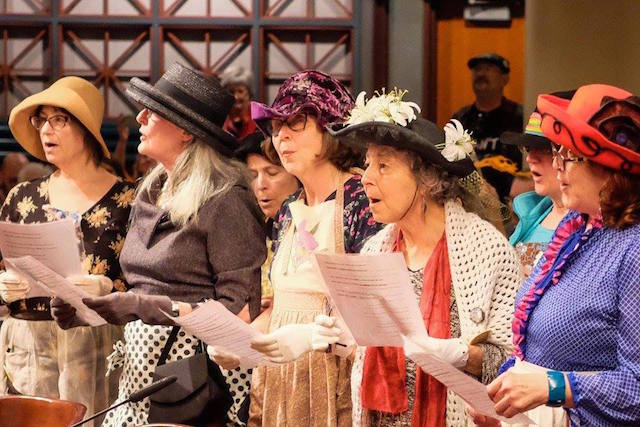 The Raging Grannies sing to the City Council, asking “Which Side Are You On?” Photo by Kathryn Kendall.

Perhaps it was doing its job too well. Recently, the City has been fiddling with the idea, approved by City Treasurer Jennifer Cooperman, of also relying upon the MSCI (formerly Morgan Stanley Capital International) environmental, social, and governance (ESG) ratings of corporate bonds. Cooperman noted that the three main objectives of her office’s investments of the City’s cash assets were to “preserve principal, insure liquidity, and earn market returns.” Nowhere in her testimony before the council did Cooperman make mention of mortal concerns such as human rights, climate justice, and social values. While it is arguable that this is not her job–she is the City’s treasurer, not its human rights liaison–the absence of those matters was glaring. What is the yield on a Palestinian community destroyed by Israeli soldiers atop Caterpillar bulldozers?  What is the maturity date for a child whose mother without documentation is detained in a Wells Fargo funded prison, awaiting deportation?

The MSCI ESG rating system is not without controversy. The “ESG Score Card” lists 14 areas in which a company is rated. Of those, seven have no bearing on the bond’s rating. In a manner that would have done John Blutarsky proud, the weights for carbon emission, toxic emissions and waste, water stress, health and safety, labor management, anticompetitive practices, and business ethics and fraud in determining a corporation’s bond rating are all 0.0%.

Hyung Nam, a member of the SRIC who testified before the council, wrote in an email, “MSCI rating methodology is flawed. For example, ethics and fraud should be primary concerns for banks, but even Wells Fargo’s low score has no effect on their overall rating, since Ethics and Fraud scores have a ZERO weight (along with Labor, Anti-Competitive Practices, and others). Also, although Wells Fargo Company as a parent company wholly owns Wells Fargo Funds which finances private prisons, there was no mention of this in the MSCI reports. In contrast, the September 2016 SRIC Report named 9 companies for the Do Not Buy list, after public deliberation and input and hours of research beyond the MSCI reports by committee members.”

As Eudaly noted, the MSCI ESG is about risk management, not ethics.

Furthermore, as Cooperman noted, MSCI is proprietary intellectual property. As Eudaly noted, that presented “a lack of transparency to the public,” something that also worried many of the 45 people who provided public testimony to the council. Even if the MSCI ESG rating is, as Cooperman said, just a piece of how her office would decide which corporate bonds the City should purchase, it clearly was of great concern to most of those in attendance that the methodology of constructing that piece would not be privy to the eyes of nearly all of Portland’s citizens.

Cooperman responded to the charge by stating that her office makes public the bonds it purchases. “After the fact,” she told Eudaly, “one can read our line by line investment portfolio.” If that was what Cooperman considered transparency, it was a very strange form of it, and one which did not sit well with Eudaly and the vast majority of public in attendance.The issue of transparency soon came up again. Prior to public testimony, Eudaly put forth four amendments. Three of those called for adding Nestle, Caterpillar, and Bank of New York Mellon to the City’s Do Not Buy list. During testimony, some people suggested that Wells Fargo also be put on the list. After this was stated a few times, Eudaly responded, saying she supported putting Wells Fargo on the Do Not Buy list, but because of proprietary information, she could not state the reason behind her support. Even with her sympathy made clear, it was frustrating that she could not reveal why. However, it also showed that people’s apprehension about a lack of transparency was well-founded.

The council appeared headed for something they could call a compromise which would entail the City’s Treasury relying on both the MSCI ESG ratings and the SRIC’s recommendations, although because of the lack of transparency regarding the MSCI ESG ratings, it would be impossible to know how much weight was given to each of those. For many in attendance, it seemed the easy way out.

“This is a lazy alternative which deserves to be rejected,” said Diane Doolin, a member of the United Church of Christ who decried the MCSI ESG proposal as a “morally blind submission to profits.” Doolin also repeated a common refrain from others who testified, that “Portland will not delegate our trust to Wall Street.”

After Eudaly presented her amendments, which were seconded by Commissioner Amanda Fritz, Saltzman put forth his own amendment, suggesting the City simply divest from corporate bonds. At the time it sounded like an idea just thrown out in annoyance with a process that was taking all too long for Saltzman’s tastes. As it turned out, that’s exactly what it was, and it was that frustration that helped carry the amendment to passage.

Earlier, Cooperman had noted that should the City divest from its corporate bond holdings, it would likely lose $3.5 to $4.5 million in interest in fiscal year 2017 and the same amount again in fiscal year 2018. Clearly, that is not chump change, but during council deliberation following public testimony, Saltzman brought up the “opportunity costs on my time as commissioner.” He stated that because of all the time he was putting into this issue, there was other work not getting done such as livability matters in Lents, Uber misleading City officials, and maintenance of city streets. Noting the disproportionate use of time on how Portland invests its money, Saltzman said it would be the “wiser course to get out of the business altogether.”

Fish also noted some frustration in dealing with the issue, saying that he was being bombarded with people telling him which corporations from which the City should divest. He figured rather than be the arbiter of these decisions, it would be better for the City to just “get out of corporate securities.” It seemed he and Saltzman would have preferred seeing the City either continue making money off of those bonds, or at least have it do so using Cooperman’s plan. But because of constant public pressure, neither appeared feasible to them.

Mayor Ted Wheeler offered a spirited defense of the City staying invested in corporate bonds, saying that Portland could use the leverage of its holdings to affect changes in corporate actions. He referred to divestment as a blunt instrument, and one which he found a passive approach to crafting change. Furthermore, he noted the many projects that could go unfunded due to the loss of revenue from interest gathered when those corporate bonds matured, a point that hit home with Fritz. It was an interesting argument, but one which ultimately reached for the lowest common denominator of awfulness as Wheeler outlined an array of horrible things done by some corporations with the implication that every company has a collection of gruesome skeletons in its closet. He seemed to be selling the old saw that capitalism is an amoral system by pointing out that, if not immoral, it certainly resulted in highly unethical actions, but that taking an active role in the market would help sort things out. It was hard to say he was wrong. 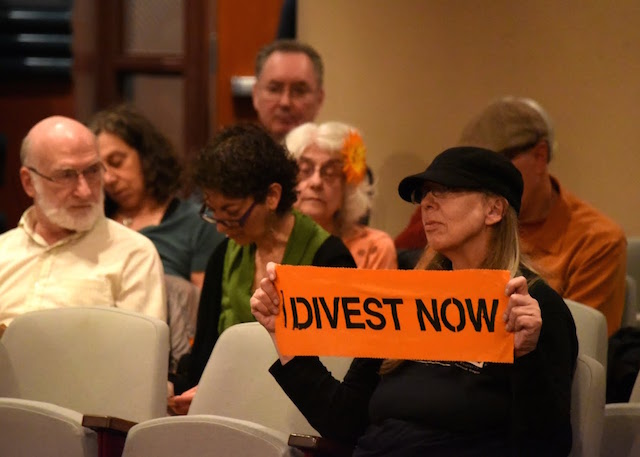 But it was even harder to say he was right. As Eudaly remarked after Wheeler finished, “Wow, that was a compelling argument against capitalism, Mayor Wheeler.”

After Wheeler and Fritz voted against the amendment, they then voted with the other commissioners to change the City’s policy so it reflected the amendment.

The move opens the door to a City bank, one which would give the citizens of Portland far greater input into where the City puts its money. Currently, the City banks with Wells Fargo, and 62.2% of its portfolio is invested in US Treasury Securities and US Government Agency Securities. Clearly, much of that 62.2% is not being used in a socially and environmentally responsible manner.

Eudaly said her office is working on a feasibility study for a City bank which should be ready in about a month. The idea was clearly popular with people who provided testimony, saying it would provide a great way for Portland to show it stands behind the values it claims to hold while holding financial benefits as well. It also appears to appeal to Fish and Fritz.

Make no mistake: this was a huge victory. It was public pressure at its finest, resulting in a victory for human rights and climate justice. It was the result of the often thankless, equally frequently unseen, and always hard work of organizing. While the decision to divest was clearly a triumph for the many groups that came together to demand the City stop putting its money into criminal corporations, the larger gain was for solidarity across multiple issues to achieve common ends.

Enlace’s Shank celebrated both victories, saying, “In this age of Trump, we see our movements coming together internationally to push back against a corporate agenda that seeks profit over investment in people and the planet. In Portland and nationally, our communities are demanding that our cities become Freedom Cities, sites of resistance and also sites of visionary advances, like what we have seen in Portland today.”