Flowing into the night?

Portland will soon be losing another stellar person when in a couple of weeks Adrienne Cabouet departs town. She will leave a void that, as with any loss, will never be refilled.

I first saw Adrienne at one of Senator Ron Wyden’s town hall meetings, held at the Portland Community College campus on Southeast 82nd Avenue in January, 2015. I was there to cover the rally in opposition to the Trans Pacific Partnership (TPP), one of those erroneously named free trade arrangements that many Democrats like Wyden love to support despite the documented havoc they bring upon workers and the environment for the sake of increased corporate profits. After the rally, the 120 or so folks who had come to demand Wyden abandon his support for the TPP went inside the meeting hall, ready to ask questions and, as much as possible in such an environment, to hold Wyden’s feet to the fire.

Just as people began going in, a rumbling emerged from 82nd Avenue. A large Black Lives Matter protest was making its way up the road. It turned on to the PCC campus and eventually marched into Wyden’s town hall, demanding Wyden take a stand about the issue of police and vigilantes murdering Black people at a rate of one every 28 hours and not being held accountable for it. I described it as “an injection of direct democracy that very rarely appears at the staid dog and pony shows that masquerade as town hall meetings.”

Wyden, reluctant to deal with the issue, eventually called off the meeting and fled. Which was fine. The Black Lives Matter activists simply moderated the town hall themselves, which probably had greater substance than just about any of the over 700 town hall meetings Wyden had earlier bragged about holding since he had been in office.

And standing tall through it all was Adrienne. 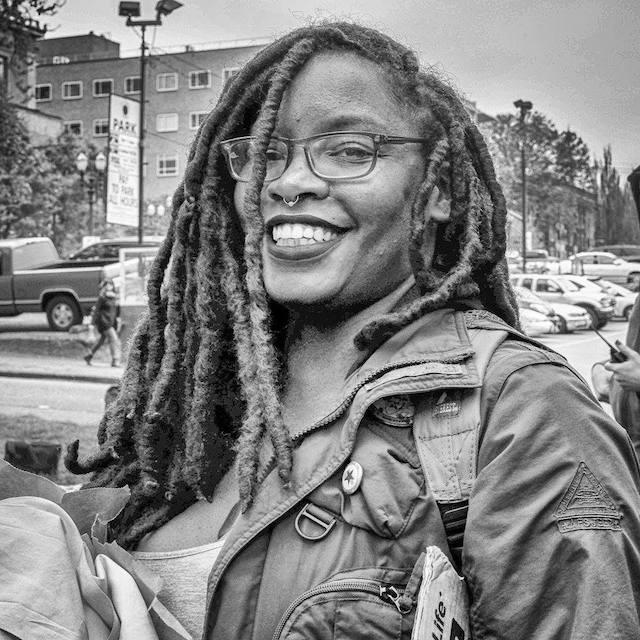 That is one of many important attributes of Adrienne. She stands tall. For herself, and for others. As an organizer for the All-African People’s Revolutionary Party (A-APRP), she has consistently stood up for the rights of African people and has continually pushed for their liberation from capitalism, imperialism, patriarchy, and colonization. And she has also pushed for that liberation for all people, something that also found fruit in her work with In Other Words Feminist Community Center and probably numerous other groups with which I am not familiar. She will continue this work after she leaves Portland, and I have no doubt that everyone who comes into contact with her will be a better person for it.

I got to know Adrienne a little through the A-APRP’s free breakfast program when it was held at Columbia International Cup in New Columbia in North Portland. Let me share with you a story that I will always hold close.

One day, a young man who often came in for breakfast, Habakkuk, was playing piano. Adrienne walked over, interested, and Habakkuk invited her to sit down and then began teaching her some of what he knew. A few other young people gathered around as well. If I remember correctly, Adrienne said she knew nothing about playing piano, but she was clearly game to learn. She followed Habakkuk’s instructions, hitting the keys as directed. Music, that most wondrous of arts, was shared. Everyone was enjoying themselves, something which I always noted during those glorious 90 minutes on Mondays and Fridays when breakfast, education, and community were served for all. It was a moment that for me summed up that wonderful program that has now grown into the School of African Roots (SOAR).

I would be remiss if I did not mention that Adrienne is incredibly intelligent, and her expression of this often comes with a generous dose of humor and wit. It has been a great pleasure of my life–and it will continue to be after she leaves–to read her Facebook posts that not only provide a vast wealth of reading material, but very often also include analysis on her part that is both insightful and accessible. That is not easy. And she dispenses it with a humility that is only found in people who truly possess a thirst for knowledge instead of a desire to wallow in it and show it off like some shiny prize

As impressive is the amount of time and patience she gives to dialogue. Facebook is often a horrible place for that, with discussions quickly descending to ad hominem attacks. Yet so often her posts and discussions keep on track, and while intense, are kept civil. That says a lot about Adrienne, and as with many aspects of her, we are a better community for it. 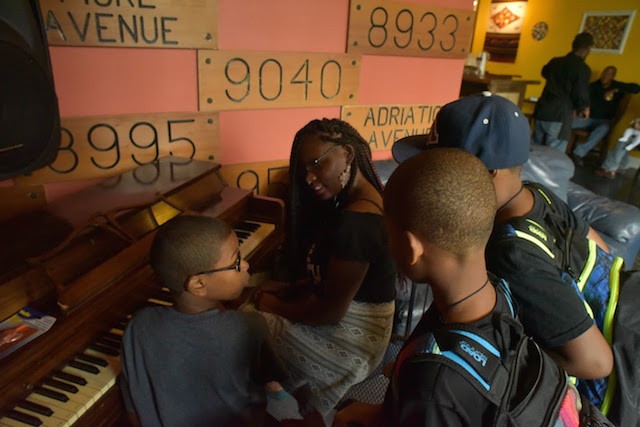 On a personal level, the best part of this job is that I get to meet some truly wondrous and wonderful people. Conversely, the worst part is that some of those wondrous and wonderful folks move on, leaving behind barbs that are painful reminders of presences once so close too soon gone. There are worse fates, no doubt, and after all this time I keep telling myself that those spurs will work loose from my flesh. After all this time, I’m still enough of an optimist to believe that someday this will prove true.

However, at this strange and early hour, John Fogerty is telling me that someday never comes. When Adrienne leaves, there will be one more barb left embedded. And there will be one less presence that when in attendance at a meeting or presentation or rally or whatever gathering, serves notice that I am on the Right side.

But of all the things I will miss when she leaves, the greatest will be her laughter. It’s infectious, and it comes easy. Most of all, it shows in her eyes. That is where you can see how honest a person’s laughter is. It is a beautiful quality.

And it befits a beautiful person whom I will miss greatly.

Good luck in all you do, and safe travels wherever you go, Adrienne.

If you would like to support the good work of In Other Words Feminist Community Center, please make a donation at: https://inotherwords.org