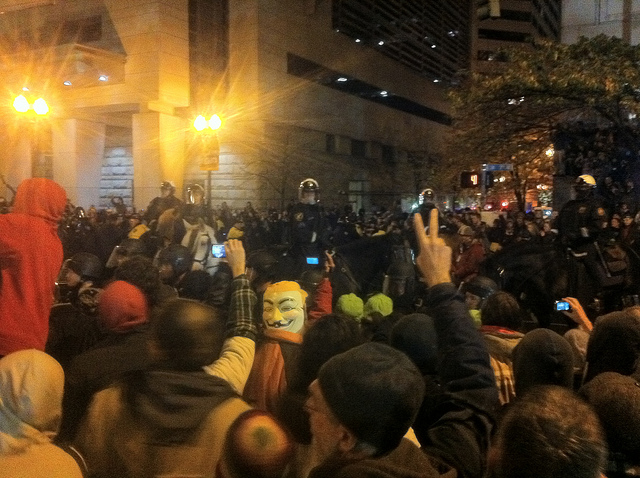 On the night of Saturday, April 21, a group of Occupy Portland activists briefly “re-occupied” Chapman Square, spurred by a Facebook post sent that very evening. The media, the city, and the Police have, as usual, engaged in their own misguided interpretation of events, attempting to spin it as a trash-talking, beer-drinking public safety problem. And while the spontaneity of this event is a hallmark of the same joyful optimism that brought all of us to that very same park six months ago on October 6, 2011, I have learned a thing or two since then–both as an Occupier and a journalist–that gives me pause.

I have seen pepper sprayings, and I have seen beatings. I have seen perhaps the most peaceful member of this occupation put in a wheelchair at the hands of the Portland Police Bureau. I have seen the city, the Police, and the media pile lie on top of lie, in an effort to excuse their own violence and malfeasance. I have seen citizens thrown in jail for having the audacity to exercise their civil rights. I have seen the force of a nepotistic justice system pointed at the heads of school teachers, union workers, students, and houseless people, in order to guarantee Christmas shopping. And I have seen this continue, protest after protest, march after march, week after week, and month after month, as this powerful antagonism reinforces itself, unabated.

Six months ago, I heard a great majority of Occupiers reaching out to the Portland Police. “They are the 99% too!” was the common refrain. We were clear that we were fighting for all workers and all city employees, just as we were fighting for those working for private companies and for those without jobs. There was courtesy and civility between the Police and Occupiers, and between the city and Occupiers. But this brief utopia was not to last.

It is difficult to say where the majority of Occupiers’ distrust of the Police and city truly began. Was it when the Police Union sniped at us in the media? Or was it when the commanding officers refused to allow their subordinates to arrest dangerous lawbreakers in the park, when Occupiers repeatedly asked them to? Was it when Mayor Adams refused to discuss the closure of the parks with the Occupy liaison team? Or was it when Chief Reese falsely accused Occupy Portland of delaying the investigation of a rape? For different people, there were no doubt different events that tipped the scale. At one point or another, we remembered that the Police might be workers, but first and foremost they are a squad of armed bouncers, acting upon the orders of the ruling elite. And the orders of this elite are to reinforce that power against any threat, by any means.

For myself, I was skeptical from the beginning. I have seen what armed forces do to nonviolent activists, once it becomes clear that those activists might just have an effect. Time and again I have seen intimidation, beatings, false prosecutions, and media smears used to discredit and break the spirit of activists. Those who wield weapons to defend the systems of control use these persecutory tools well. But in October, I was willing to wait. Perhaps this would be the sea change that everyone said it would be. Perhaps we would have a “Velvet Revolution”, when the powers would order their armed forces to stand down, and the better aims of society would win the day. 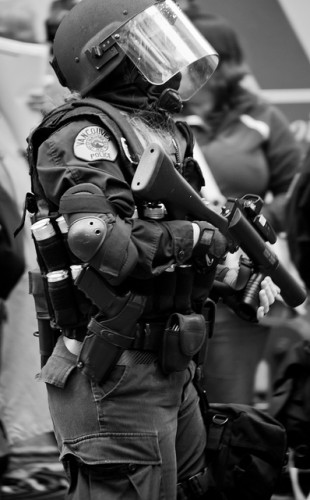 Those powers did not order their armed bouncers to stand down. They gave them free reign to release their clubs, to discharge their chemical weapons. They sent lawyers against us. They sent the media against us. They lied, hit, sprayed, and they imprisoned. And even as Occupy Portland maintained its radical non-violence, the city and the police portrayed us as dangerous criminals, deserving of far worse than we received.

If only being ethically correct was enough to win the day. If only the purity of our non-violent conviction was enough to repair nerve damage. If only our popular appeal to the morality of the populace was enough to counter the perpetual inertia that corporations and their police forces have instilled in America. If only, with the correctness of our actions in our hearts, their sticks and stones would break no bones.

These are things that I have seen with my own eyes, as I attempt to document this movement, and to tell its unique stories. I try to be a conduit, to let the voices from the streets speak through me. There is joy in the streets, and pain as well. There is happiness, and there is ever-present, crushing sadness. These are tropes, but the voices are unique. There are people out there who are trying to tell their own stories, in the only way they know how.

I don’t want to hear those voices speak in vain. A large number of people with Occupy Portland continue to march almost every week, because “we have to do something.” I agree, we have to do something. But when “something” becomes the “same thing”, and when that same thing ends in brutality from forces who are all too willing to dish it out, something isn’t working.

We must do a better job, and we must do so immediately. Too many nights we have waited on the steps of the Justice Center for our friends and colleagues to be released from jail. Too many times we have stood immobilized in the dark, as our fellow activists are tackled to the curb and brutalized. Too many times we have reviewed our video footage to find that there is no visual record, and once again, with our freedom at stake, it will be the words of the Police against ours. Our activism must advance past the beauty of spontaneity and achieve the intelligence of defensiveness. We must not only be stubborn–we must also be smart.

In the past several months, we’ve seen the benefit of a non-violent, defensive posture on our own streets. We’ve seen how refusing to be the victims of an unrestrained army can win the day. We stand strong, with defensive equipment, in the bright light of day, with cameras rolling. By doing so, we are not at the mercy of their weapons and their lies, and we show the world who we truly are.

I love all Occupiers, and support them in everything that they do. I believe a diversity of tactics spreads both ways, toward both radicalized protest and more mainstream efforts. But as a media activist, I am tired of telling the sad stories. I don’t want to see more Occupiers on trial for standing on a sidewalk. I don’t want to see more Occupiers injured because the Police cannot be held accountable. We are not easily going to change the way that the Police and the City operate. We can only change our own actions. Because of what the Police and the City have done–and continue to do–it is time for us to protest smarter.