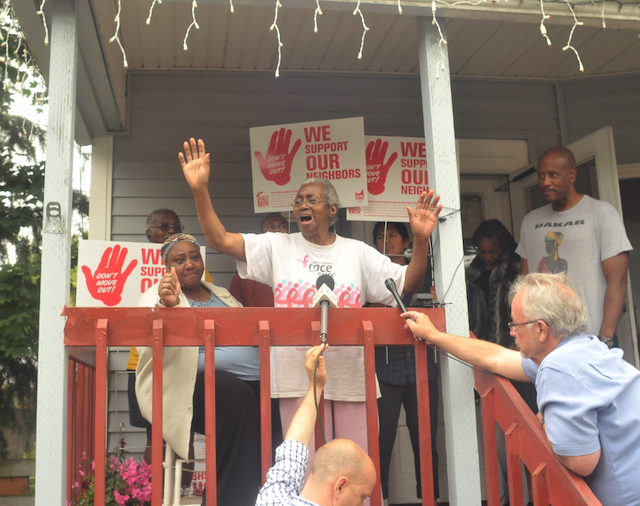 When the clock ticks past midnight into Saturday July 28th the Multnomah County Sheriff will be able to enforce an eviction notice issued by the Circuit Court of Multnomah County on the house of Annette Steele of 4022 NE 14th Avenue. But Steele, her family, her friends, and her neighbors are not planning on her going anywhere.

At a press conference organized by the Black Working Group and We Are Oregon, speakers including Steele called out the injustice of the banks which were bailed out through taxpayer money not willing to help struggling people with their mortgages, and implicitly, the government, which funneled those taxpayer dollars to the banks, putting little pressure on the banks. Liquidation Properties Incorporated, the company that continued the foreclosure on Steele’s house, was renamed Citi Properties Incorporated, effectively making it a subsidiary of Citigroup, which received a $45 billion taxpayer funded bailout in 2008 that kept it from going out of business.

Among the speakers at the press conference was Angelah Hill. She was born, raised, and attended school in Portland, and now is facing foreclosure. Like Steele and her family, she refuses to leave her home and her neighbors refuse to let the police enforce her eviction. Much as with Steele and many facing foreclosure, Hill played by the rules and paid over $177,000 in interest payments, which she considers more than enough. But the banks did not play by the rules, pushing predatory subprime mortgages as well as lying about mortgage structures, and at least in the case involving Steele, the courts have come down on the side of the banks who broke those rules.

Hill connected today’s foreclosure crisis, particularly in Northeast Portland, the historical home of Portland’s African American community, with the legacy of slavery. After emancipation, Jim Crow laws in the southern states as well as a softer but equally institutionalized racism in the northern states prevented African Americans from access to many of the avenues of wealth available to white people. Where white people could move up from poorer neighborhoods to wealthier ones, at least to a certain extent, African Americans often encountered obstacles such as redlining where banks would refuse to sell them mortgages because, usually due to segregation, they lived in neighborhoods where loans were considered risky.

This redlining, so named for the color used on the maps drawn up by the Home Owners’ Loan Association at the request of the Federal Home Loan Bank Board, defined many neighborhoods, most of them populated by non-whites, as ineligible for mortgages, a decision based upon racist assumptions about the community, not its individuals. Unwelcome in many white neighborhoods, redlining effectively shut African Americans and other non-white groups out of the mortgage market, and thereby effectively shut them out of the American Dream whose touchstone is home ownership.

The modern version of redlining, at least in terms of having a devastating impact upon non-white communities, is the subprime mortgage, which commands a higher interest rate because borrowers do not qualify for conventional loans. At least, that’s the theory. Subprime mortgages, according to a 2009 report by the Center for American Progress, were targeted toward minority groups, with members of those groups often steered into subprime loans even when they qualified for prime loans. The difference between the two can add up: according to a New York Times article from 2009, a $165,000 mortgage loaned as subprime adds over $100,000 in interest payments over a conventional loan. If the loan has a variable interest rate, one which steeply rises after a set time, the payments can be far more.

When the economy crashed in 2008 and many people lost their income, in part or in full, paying the mortgage became (more) difficult. Members of minority communities have a higher percentage of their wealth in their houses than do white people, and thus had less of a cushion to fall back upon, a problem exacerbated by the higher interest rates of the subprime loans that had been pushed upon many of them.

One of those with a subprime loan was Annette Steele. Quick Loan Funding, which before it collapsed had written about $4 billion in subprime mortgages funded by Citigroup, steered Steele, at that time 75 and having paid 20 years of her mortgage, into a subprime variable rate loan so she could do needed maintenance on her house. Predatory lending companies such as Quick Loan Funding often see marks in the elderly and people of color. Despite it being a bad loan, Steele made all her payments on time. As a condition of her loan, the rate was to be refinanced, but she was consistently denied refinancing and the ballooning bill became unmanageable.

So Steele was saddled with an unjust loan, foisted upon her by a company funded by Citigroup, the Wall Street bank that received the most taxpayer dollars of all the Wall Street banks to stay afloat, and then the Multnomah County Court upheld the unjust loan and Steele’s eviction by the company that picked up the foreclosure after Quick Loan Funding collapsed, a company that was effectively a subsidiary of Citigroup.

Ahjamu Umi, who lives in Northeast Portland and is a member of the Black Working Group, said, “Housing is a right, and the banks don’t have any authority to take that away.”

Alicia Jackson, who with the help of the community, took back her house on May Day, attended the press conference and expressed her support for Steele and others facing foreclosure. “We’re all fighting for the same thing. She’s (Steele) fighting to keep her home. I’m fighting to keep mine. It’s all about community. There are too many empty homes and too many homeless people.”

Steele was the last to speak at the press conference. She opened her remarks with words that if the resolve of the community remains strong will ring true for some time: “I’m Annette Steele, and I live here.”

To join the Portland Liberation Organizing Council’s Rapid Response Network, send a text message to the number 23559 and type @Ploc-openrrn You’ll get alerted when a community home defense takes place. 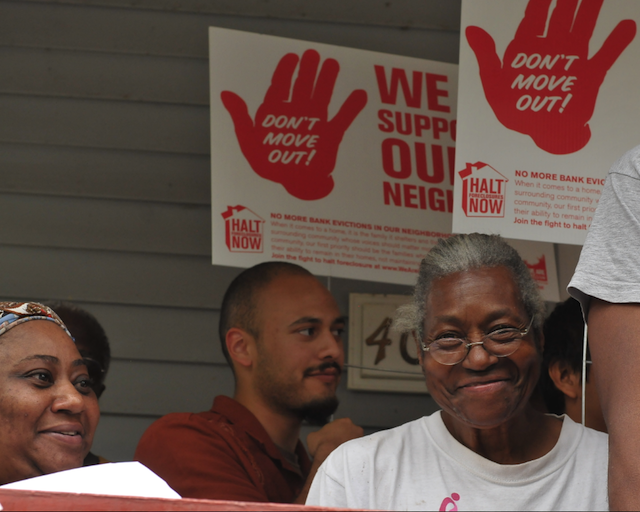 1 comment for “Another Portland Homeowner Stands Strong Against Modern Redlining”