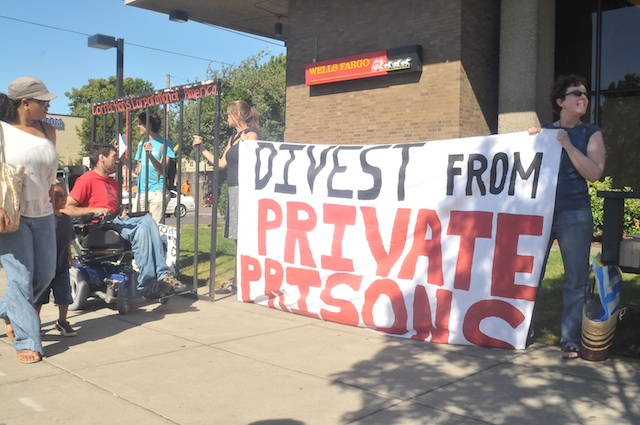 A swelling prison population is money in the bank for Wells Fargo, one of the top shareholders in Geo, the second largest prison company in the country.

In their continued campaign to urge the company to divest from the for-profit prison industry — particularly Geo Group and Correction Corporation of America — over 20 people amassed outside the Wells Fargo branch on NE MLK on August 3. Talking with bank customers and passersby, the protesters handed out “coupons” for $100 free checking when opening a new account and providing “proof that you had a person of color arrested and detained through one of our Private Prison Partner Corporations”.

The ongoing campaign began with an affinity group from the Portland Central America Solidarity Committee (PCASC) occupying the Wells Fargo branch on SW 5th Avenue during the Occupy the Banks protests on November 17, 2011. Since then PCASC has partnered with other community groups, including Enlace, as part of the national Prison Divestment Campaign to force Wells Fargo’s divestment.

According to Jake Dacks, one of the protest organizers, Wells Fargo hires the same lobbyists as Geo does in order to enhance existing legislation, as well as create new laws that result in more prison time for offenders – often people of color, particularly those without documentation. These laws, along with inhumane measures such as cutting money used for health care and food, result in greater profits for Geo and Wells Fargo.

“Wells Fargo finances the state legislators who are behind the SB 1070 copycat law in Georgia which devastated communities in that state,” said Dacks. “The for-profit prison corporations make money off of increased incarceration, often at the expense of people of color, and through government contracts that are paid for with our taxes. When the private prison companies benefit from these racist laws, so do their investors, fueling the cycle that gives Wells Fargo increased incentive to lobby for the criminalization of immigrants.”

The protests are registering notice at the big bank. After a June 25 letter drop at eight Portland branches, asking to meet with the managers to discuss the bank’s links to the private prison industry, the group was contacted by Wells Fargo’s senior counsel. The letter, said Dacks, “told us we were not welcome into Wells Fargo to do anything but bank.”

“We recognize that we have hit a nerve,” said Dacks, “and we are going to keep up the pressure in Portland through direct action and protests, and we will continue encouraging individuals and institutions to get their money out of Wells Fargo. There are plenty of credit unions in Portland area that use investment to offer lower interest loans to the community. The money in credit unions is invested in the community, not in private prisons, which rip communities apart.”

Interested in pushing Wells Fargo to divest from the private for-profit prison industry, as well as getting the profit motive out of prisons? Visit www.pcasc.net. PCASC meets at 2249 East Burnside Street at 7 pm on the 1st and 3rd Wednesdays of every month.