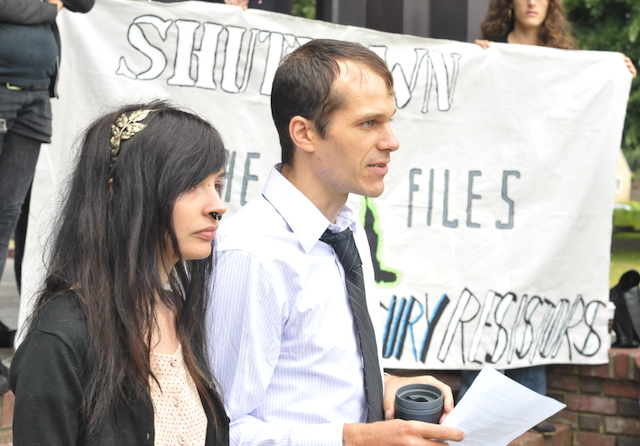 Leah-Lynne Plante and Dennison Williams at a press conference on August 1.

“To live outside the law you must be honest.”  –Bob Dylan

I am not sure why I am thinking of these words right now. I am trying to come up with some coherent thoughts, some wisdom about Leah-Lynn Plante, the courageous young woman cited for contempt of court on October 10, after her third refusal to testify before a grand jury, as well as Matthew Kyle Duran and Katherine Olejnik who remain imprisoned for contempt of the same grand jury. Before her release on October 17th, Plante spent a week in a Washington state federal prison, largely in solitary confinement, where she could have remained for the next 18 months.

I am thinking about what I have lived through the past 18 months. I saw some of my closest friends marry and others have a beautiful daughter. I more or less finished grieving the loss of my mom. I lost a friend. I’ve loved and felt love. I’ve traveled far, and also extensively around my own neighborhood. I saw Occupy Wall Street bloom from the table of a diner in upstate New Jersey and witnessed Occupy Portland in all its wonders. I’ve seen numerous friends and acquaintances do amazing work. I traded some songs with great musicians and played others for loved ones. Despite being a mediocre painter, I’ve painted. I sent people drawings from Italy — childish compositions that would probably offend the core DNA of anyone who has ever dropped a jam jar on the floor.

With people I hold close I made great zucchini relish and even better tomato sauce; brewed beer both superlative and crappy. I baked about 40 loaves of bread for one of the aforementioned weddings, at which I teared up as someone played Townes Van Zandt’s “To Live’s to Fly.” I cried as I held my wife’s hand and listened to Ray Davies sing “Waterloo Sunset,” and I was in paradise. I saw Roy Haynes — fucking Roy Haynes who has played with some of our greatest artists — drum like he was 27 instead of going on 87. I made many people laugh and too many cry.

I thankfully haven’t seen the best minds of my generation destroyed by madness.

I made new friends who enrich my life and experienced great generosity at their hands and the hands of strangers. I had a pleasant Christmas with my dad. Together we walked a few miles along the mid-Jersey coastline with my brother John. I woke most mornings with my wife at my side. Sometimes at night I put my ear on her chest and listened to her heart beat (listen, listen, listen), heard it pick up pace, and then found my head embraced in her arms. Too many times to count — each one always precious — she has given me the smile that invites me into a rare place where I feel secure, safe and sound.

I have had all these experiences over the past year and a half because of freedom. The Tea Party folks love to talk about their love of freedom. They and their ilk suck on flags and the Constitution, yet spit contemptuously upon their meaning. Liberals talk for the nth time about how this is the most important election in my lifetime — that a dark curtain will descend if Romney wins. Maybe so, but we are far too many years into the criminal and murderous madness of Afghanistan and Iraq — wars supported by Conservatives and Liberals alike. I am told, this latest time by Joe Biden and Paul Ryan in a recent debate, echoing every politician of my lifetime, that it is the soldiers who are defending our freedom abroad. These soldiers being thrown, blackmailed, forced, volunteered, or otherwise crucified on a cross of oil, are surely defending something. But it is not freedom.

As far as I can see, it is people like Plante, Duran, and Olejnik who truly defend freedom by giving up their own. The grand jury once had a reasonable and noble purpose:  it prevented the king from shunting people into perpetual darkness simply because he opposed their actions. What was once a check upon the abuse of power has now become a tool of power, used to break butterflies upon wheels. The grand jury exists to coerce people into snitching on family, friends, co-workers, and co-activists in order to destroy movements that seek justice in an unjust world.

I briefly met Plante a few weeks ago by chance. She is slight of build, in direct physical contrast to how our popular culture typically depicts those of courage and fortitude. Though my capacity to function in social gatherings is, shall we say, less than optimal, I hope I managed to convey my admiration to this young person.

She smiled. I will never forget that. Through all the duress, she smiled. I hope she can continue smiling in a world that has already done its best to make sure she never does so again. I as well hope that when Duran and Olejnik are released, they too can smile, sooner than later.

For the next 18 months they may be giving up their personal freedom because the powers that be have forced their hands. Duran and Olejnik are choosing prison — and Plante made that same choice — because the government of the United States — much of the representative portion of which will be elected in a few weeks — has offered them a devil’s choice: tell us what we want to know or go to jail. In steadfastly refusing to bow to the grand jury, they have chosen principle.

It is because of people like Plante, Duran, and Olejnik, who understand that one of the most important aspects of freedom is standing up to those who oppose it, that I — and hopefully all of you reading this — will be free to spend the next 18 months in the sunlight and darkness of our own choosing.

Plante reportedly received over 200 pieces of mail in four days, something that may have contributed to her release on October 17th. Please take some of your time to write Duran and Olejnik and let them know you appreciate their sacrifice. Send them your admiration. Send them your love. Two hundred times over.

They have earned it.

You can mail Matthew and Katherine at:

You can find information about Matthew and Katherine, and advice about composing letters to resisters at: http://supportresist.net/letters.html.