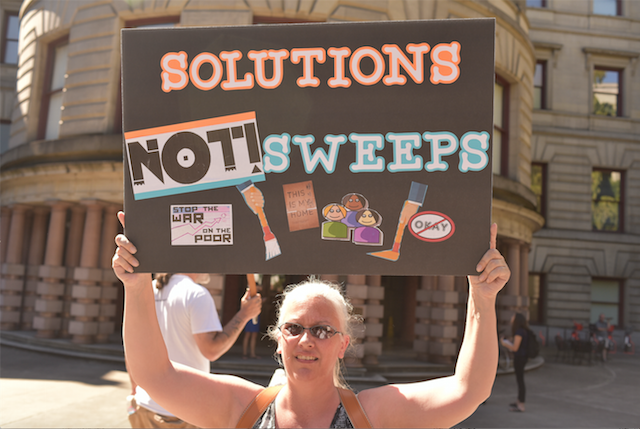 Resistance mounted by houseless residents of the Springwater Corridor and their allies has resulted in Mayor Charlie Hales delaying sweeping away people without housing who live along the trail. Two weeks ago Hales announced that camping would no longer be allowed along Portland’s portion of the 21 mile long trail and that the City would evict people from Springwater on August 1. A campaign of letter writing, lobbying, and direct action forced Hales to push back the evictions until at least September 1. The 500 residents of the stretch of the Springwater Corridor covering 82nd to 122nd Avenues compose the largest single houseless encampment in the United States.

In February Hales lifted the City’s camping ban. That change made it legal for groups of up to six people to camp on City property as long as tents were removed by 7 AM. The mayor has said that services will be provided to people forced out of Springwater, but according to Portland Tenants United (PTU) services are “already at capacity.” In other words, should Hales initiate a sweep on September 1, the people living along Springwater Corridor will be cast to the wind.

After Hales announced his original plan to sweep the Springwater Corridor, the people without housing who live there convened a general assembly that included supportive neighbors and community members, as well as allied organizations including PTU, Boots on the Ground PDX, Backpacks of Hope, Advocacy Five, Jobs with Justice, Rising Tide, Anawim Christian Community, Hazelnut Grove, Portland Solidarity Network, Serve the People, and Right 2 Dream Too. At that meeting Springwater Corridor residents voted to demand the City cancel the sweep and commit to not displace any houseless residents of Springwater without dedicating resources to a relocation plan.

At a rally outside City Hall on Thursday July 28 that had originally been scheduled to further pressure Hales into abandoning the sweep, Austin Rose of PTU described the one-month reprieve as a “temporary victory.” Speaking to a crowd of about 30 people, Rose said, “Unless the mayor works for real solutions to this problem, he’s going to go in there on September 1 and do the same thing he would have done on August 1.”

Rose noted that those “real solutions” must include all people impacted. “We need real, collaborative solutions,” Rose told the crowd. “No clean up about us without us!” In particular, Rose noted that people without housing “have been forgotten in these conversations about their lives.” 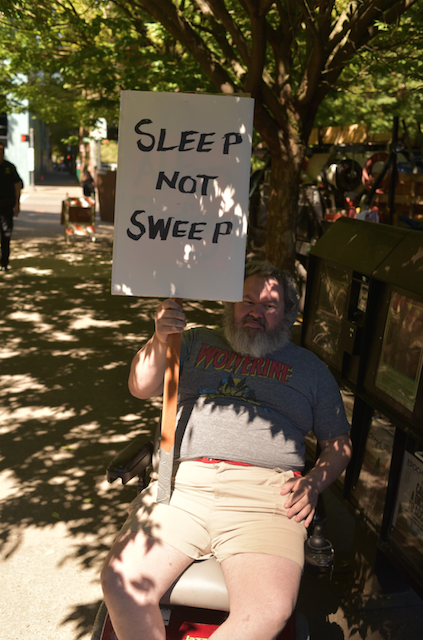 One potential solution which seems to be catching the City Council’s eye is a proposal by developers Dike Dame and Homer Williams to create a shelter for up to 1,400 people without housing at the Port of Portland Terminal 1, just north of the Fremont Bridge along the West bank of the Willamette River. According to the Oregon Department of Environmental Quality (DEQ), the facility had been used for “staging of lumber, logs, paper products, steel containers, and bagged grain.” The City now owns the property.

Three years ago, Dame and Williams vociferously opposed Right 2 Dream Too’s move to a new site under the West side of the Broadway Bridge. Their hostility, along with that of many other residents of the Pearl District, resulted in the move’s scuttling.

Commissioner Nick Fish opposes using Terminal 1 for a shelter, but even if approved by the council, the site would likely not be available to the residents of Springwater–or any people without housing–for at least a few years (although according to Tony Hernandez at the Oregonian, Dame and Williams have said that an 18 month temporary shelter could be erected within 60 days). As well, the site is zoned for industrial use, and according to the DEQ is contaminated with heavy-oil-range hydrocarbons, PAHs (polycyclic aromatic hydrocarbons), arsenic, copper, and lead.

But more importantly, according to Rose, nobody has bothered asking the people without housing who will be expected to make use of the shelter what they think of the plan. For now, Rose says the best working solution for the residents of Springwater is Springwater. When he mentioned the Terminal 1 plan at Thursday’s rally, the crowd voiced opposition. One person shouted, “It’s a prison for the homeless!”

It is paradoxical that Hales would jettison the over 500 people who reportedly live along the Springwater Corridor. According to the report 2015 Point-in-Time Count of Homelessness in Portland/Gresham/Multnomah County, Oregon, there are 1,887 people without housing living in Multnomah County. Because resources for people without housing are already stressed to their limit, PTU says, “When folks are forced out, there is nowhere for them to go except into the neighborhoods.”

On top of that, the renter state of emergency continues as rents continue skyrocketing. According to the website Rent Jungle, the apartment rental in Portland over the past 6 months increased by 3.8%, or $61, with the average rent for a one bedroom apartment costing $1,546, while a two bedroom rental averages $1,871.

The exorbitant and increasing rents make for a natural alliance between tenants and people without housing. “A lot of tenants are one paycheck away from being out there themselves,” said Rose. “So we believe these fights go hand in hand. Walking the trail in the days preceding our meeting, it was clear talking to folks that many residents used to have housing in the surrounding neighborhoods. Many Springwater residents were displaced by landlords trying to raise rents or issuing no-cause evictions. Hales’ planned eviction is a double injury to these Portlanders.”

Residents of the Springwater Corridor will continue organizing with their allies as long as Hales’ threat of sweeping them away from their homes looms. Their resistance is important both to people without housing as well as those who rent.