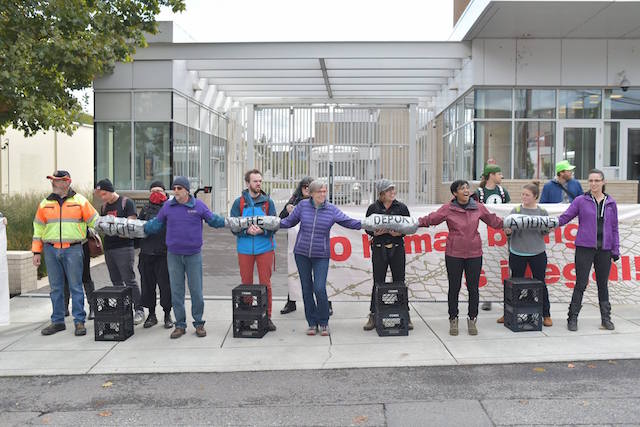 Riverside Drive in Denville, NJ runs no more than a half mile, following the course of the Rockaway River between Diamond Spring Road and Gardner Field.  On a mailbox outside of one house along the road is an inscription reading, “Seek Ye The Lord Now.” I am not a religious sort, so I don’t normally spend my time searching for such things.  But when I arrived here yesterday and was sitting with my father as he ate dinner in the facility he is staying at until he fully recovers from a broken foot, I heard Donald Trump being uglier than usual as he tried to explain his administration’s policy of tearing away children from their families along the Mexico-United States border.  He is a small, cruel, and punitive man; a terrible example of humanity, broken and damaged. And as such, he seemed palpably upset that a sizable chunk of people who were perhaps previously content to ignore his decisions and actions, were not too keen on seeing parents forced to abandon their children.

I suppose humans to some degree always live in odd times, and every so often the odd becomes intolerably despicable to people.  We seem to be experiencing one of those moments and indeed a few hours ago, Trump issued an executive order that upon first glance seemed like he was maybe, possibly, conceivably rolling back the policy.

While he may be changing the policy that has so many people in an uproar, so much of the executive order is nebulous, and the overall result seems part of a shell game.  As the New York Times put it under their headline announcing the move, “President Trump caved to political pressure and signed an executive order that ends the separation of families by indefinitely detaining parents and children together at the border.”  The key words in there are “indefinitely detaining,” and within the context of the clause containing that phrase, a more worldly way of putting it would be “putting them in jail for as long as the Trump Administration pleases.” Votes for substituting “concentration camp” for “jail” will be accepted.

However, considering these policies odd is a mistake.  They are, to use a phrase, as American as apple pie. For slaveholders, Africans were commodities to be bought and sold.  If there was a crime in doing so, it was in not maximizing profit through these grotesque but completely normal exchanges.  Indigenous families were torn apart too. Japanese and Japanese American families were also ripped when they were sent to incarceration camps during World War II (and again, votes for concentration camps will be counted).  These actions were smiled upon by policymakers, as has been our current immigration rules and laws for many years now.

And, of course, most of these people are fleeing conditions that US economic and foreign policies helped create.

Many–even most–of the people dictating this current policy, as with the similar earlier ones, call themselves Christians.  Seek ye The Lord now. Damn if they don’t look in the strangest places.

I am familiar with The Bible.  I was raised a Roman Catholic, and I had excellent theology teachers when I was in high school.  Still, it seemed a good idea to give parts of it a quick read, particularly the gospels–the stuff that puts the Christ in Christian.

I recently turned 48, and while my memory is not as good as it once was, I found myself correct in remembering that nowhere in the gospels does Jesus say people should tear apart families.  Now, I long ago realized that despite its claims, this country is not and never has been a Christian nation, at least in terms of the gospels. Certainly, the Constitution makes no such claim, and a rudimentary glance at reality–dropping bombs on innocent people for example, which we do quite often, ruthlessly, and efficiently–violently shows otherwise.

This is the so-called right to life crowd, whose list of people who do not count as life is long.  I rarely quote Hillary Clinton, at least in a positive fashion, but yes, these people are Deplorables.  And they are not, if one goes by the gospels, Christians. They are -ians, and they, to use a line from Kurt Vonnegut, act in manner that must shame God himself.

There are of course many good people who identify as Christians, and as well, many good people who do not, but engage the world in a manner that is recognizable to those who respect the gospels and other sacred scriptures that call for Justice.  As I sit here 2,863 miles from Portland, some of them are surrounding the ICE prison on Southwest Macadam. I am seeing reports that the jail has been shut down, and in an irony that would be hilarious if it was not grounded in the horrible, racist tearing apart of families at the Mexico-US border, administrators are asking those good people surrounding the jail to please let the workers leave so they can go home and be with their families.

I see now that two Friends have posted a picture of their tent just outside of the gate to the jail.  They just got down there and are spending the night. This makes me happy to see them, among so many others, taking part in this action, part of a greater effort, as one of those Friends put it, “supporting the abolition of this terrible system.”  The future is always beginning now, and its arc is bending a little more toward justice.

As I wrote above, I was raised Roman Catholic.  One thing I was taught was that pride is a sin. While I am not big on the idea of sin, at least in the sense that without the proper intervention one will spend an eternity in hell, I somewhat eschew pride.

But as I sit here at my brother and sister-in-law’s computer, in this small town in northwest New Jersey, I am swollen with pride to the point of tears that I know these good people who are part of a movement, as well as other good people who may soon move beyond this singular but important action to become part of movement, organizing to stop not just this Sinful policy, but this Sinful system.